Through innovative experiments and sophisticated quantitative methods, IPR researchers document inequity with facts and figures. Their research-driven policy ideas could help bring the goals of Biden’s executive order on advancing equity for all to fruition. 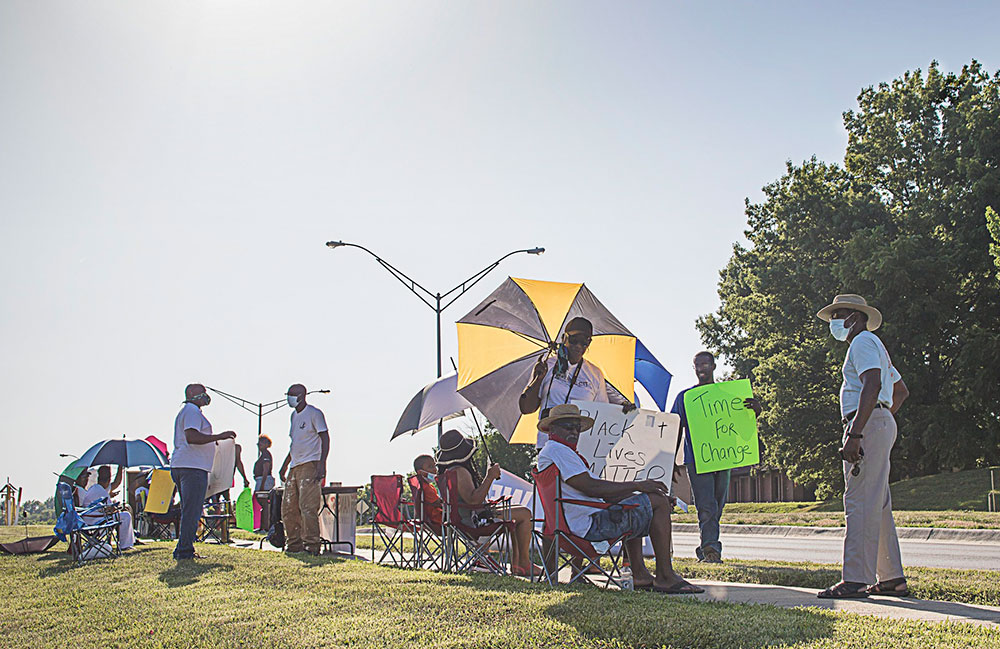 Protesters in Kansas City, Kansas, call for measures to ensure equity in policing in July 2020.

On his first day as president, Joe Biden signed an executive order that the federal government pursue comprehensive policies to close racial gaps and advance equity for all.

IPR faculty have identified and sought to address gaps, all of which the pandemic and ensuing recession have affected. These include:

The data demonstrating these and other staggering examples of racial inequities were all uncovered or analyzed by IPR social demographers, sociologists, health disparities scholars, psychologists, political scientists, economists, and others. Through innovative experiments and sophisticated quantitative methods, IPR researchers document inequity with facts and figures.

“IPR faculty experts have been working across their entire careers to rigorously scrutinize issue after issue of racial and social inequity,” said IPR Director Diane Whitmore Schanzenbach. “Beyond their extensive academic contributions, they also take it upon themselves to share thoughtful, evidence-based policy recommendations with policymakers and the wider world to redress these destructive gaps.”

IPR researchers have also made the following specific research-driven policy and funding suggestions on education, healthcare, housing, and other government services that could help bring the goals of Biden’s executive order to fruition. Read more about previous IPR policy suggestions.

Elizabeth Tipton, an IPR statistician and co-director of the Statistics for Evidence-Based Policy and Practice, or STEPP, Center recommends that the Department of Education implement a “National Longitudinal Study of Teaching and Curriculum.” She notes that previous efforts to improve schools and reduce inequality have focused on collecting data on educational outcomes, such as test scores. Although these outcomes indicate where achievement gaps exist, they do not provide information on what is happening in the schools—the inputs. Inputs include what curricula, textbooks, and tech products are being purchased and implemented, what teaching methods are common, what resources are available, and the degree to which these curricula and experiences contribute to the achievement outcomes observed.

As Tipton and Robert Olsen of Westat point out in their review of generalization methods for educational interventions, the knowledge, methods, and tools for evaluating the factors that shape education exist already. Her development of a free web tool, The Generalizer, will assist educational researchers to recruit the best school samples for their studies, and the data from a National Longitudinal Study of Teaching and Curriculum would allow the study of these factors, the development of better studies of new interventions, and effective policy targeting of new and existing interventions.

Based on her research into child and adolescent development, IPR developmental psychologist Onnie Rogers calls for federal funding through the Department of Education to give elementary school educators’ access to racially conscious and anti-racist curricula and instructional strategies.

Rogers points out how schools are microcosms of society where children learn how society works. And currently, schools are places where children learn how to reinforce rather than disrupt inequality. By the time children reach elementary school, they are well aware of social inequalities based on race, gender, and social class, and begin to form an understanding of their own identities within these social hierarchies—positioning girls relative to boys and Black people relative to White people.

Providing anti-racist educational resources at a time where elementary-school children are forming their identities and beliefs about their nation, their society, and the world is critical, Rogers argues. Such resources should recognize the ways that the United States was built for and on the basis of racial inequality and injustice. Additionally, they should identify the dominant stories that silence these historical facts and intentionally name, disrupt, and replace them with stories of justice, cooperation, and empathy. Rogers clarifies that schools must be based in anti-racist funding policies and practices (equitable resources, teacher salaries, quality learning spaces and technologies), and their efforts to address racial inequality must be intentional, explicit, and consistent. 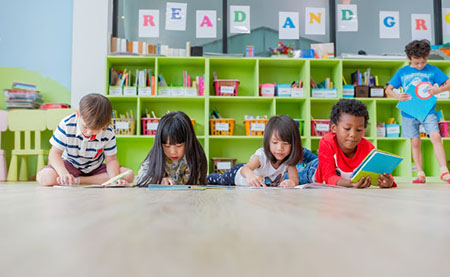 Based on her work exploring the importance of language and its link to cognition during a baby’s first year of life, IPR psychologist Sandra Waxman proposes that federal education funding be dedicated to universal affordable, early childhood programs and childcare for infants and toddlers. Such programs would serve to increase fundamental cognitive social capacities that are foundations of learning for all American children.

Such programs could also help reduce racial bias. Waxman’s research shows bias starts at a young age: Four year olds start to reveal strong and consistent evidence of bias around race and gender. Toddlers in the study displayed more negative responses toward Black boys than to Black girls, White girls, or White boys. This research also highlights the importance of creating government-supported Pre-K and childcare programs that address racial inequality during the early stages of development as children begin to learn language and observe differences in their peers.

In school districts across the country, administrators are searching for tools to help classroom teachers practice school discipline in racially equitable ways. Administrators recognize that harsh and excessive school discipline is harmful for many reasons, including its role in exacerbating racial inequality. IPR education sociologist Simone Ispa-Landa urges the Department of Education's Office for Civil Rights to invest in a program of rigorous research to identify when, and to what extent, various disciplinary reform programs are effective. The punitive discipline that disproportionately impacts students of color has dramatic implications for students’ future life chances, the wellbeing of communities of color, and for broader racial inequality. Ispa-Landa’s research shows that strong support for change in school discipline, but many promising disciplinary approaches, including restorative justice, remain incomplete. By funding rigorously conducted research into program implementation and outcomes, the federal government can provide evidence-based guidance and incentives to state and local stakeholders searching for the right tools to improve our schools’ systems of discipline and punishment.

Race-based bias built into healthcare and educational settings continues to perpetuate racial inequity. Funds should be allocated to assess bias and to overcome it through training, according to IPR political scientist James Druckman. He has uncovered biases operating in college staff assessing accommodations for students with education disabilities, in medical staff’s perception of pain in student athletes, and in ordinary citizens’ perceptions of disease, including the COVID-19 pandemic. The common thread he identifies is that racial bias influences people’s attitudes, decisions, and actions, even among the most racially liberal individuals.

Druckman demonstrates that college athletic medical staff, even those of long experience who are relatively unbiased, are more likely to perceive that Black college athletes feel less pain than White athletes do. In the larger population, he finds that when messages around infectious disease, including COVID-19, are coupled with narratives about Africa, people favor harsher sanctions, like travel bans, than if non-African countries are linked. In college offices offering disability services, the largely unbiased staff still show small biases towards Black disabled students because they deem them to have less drive or work ethic to overcome their challenges than White disabled students. However, staff who received diversity training overcame this bias, according to his recent working paper. Funding for training around race-based biases could bring structural changes to eradicate them, Druckman says.

Confronting a History of Segregation to Expand Fair Housing 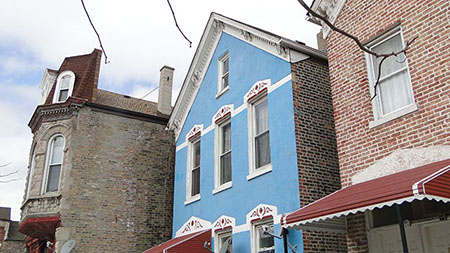 American neighborhoods continued to be highly segregated on the basis of race and income. Residential segregation  has substantial negative effects, especially for disadvantaged families who are disproportionately subject to disadvantaged neighborhood environments in segregated metropolitan areas.

To combat residential segregation, IPR sociologist Lincoln Quillian recommends that the federal government should reinstate the Obama administration’s Affirmatively Further Fair Housing (AFFH) regulation, which was eliminated under the Trump administration. The AFFH regulation requires that the Department for Housing and Urban Development (HUD) and the agencies HUD provides grants to—including many local governments—must avoid discrimination in their housing programs, take steps to reduce historic patterns of discrimination, and increase access to opportunities to those whom it has been denied.

Local land-use policies in many jurisdictions promote segregation of urban space through zoning rules that block the construction of lower-cost housing in many more affluent and whiter areas. The AFFH can provide needed pressure for local jurisdictions to reduce these and other barriers to more integrated housing. To support AFFH, HUD funding is needed to help monitor compliance of local jurisdictions and to provide legal counseling for renters and homebuyers who encounter discrimination. Discrimination in housing is a persistent problem that contributes to segregation.

Between 1990 and 2010 the Black-White life expectancy gap closed by 45%, but academics and policymakers have largely ignored efforts to understand why it shrunk. IPR economist Hannes Schwandt recommends that federal funding from the National Institutes of Health go toward analyzing what led to the remarkable mortality improvements among Black Americans to continue these positive changes. Analyzing why the life expectancy gap narrowed is even more pressing during the COVID-19 pandemic, which has hit Black communities particularly hard. COVID-related deaths have been a major factor in the decline of U.S. life expectancy overall, but especially for Americans of color. In 2020, Black men suffered the largest drop in life expectancy, a drop of three years, compared to any other racial or ethnic group.

Work by Schwandt and Princeton economist Janet Currie finds that Black-White mortality gaps strongly decreased between 1990 and 2010 at all ages. At younger ages, mortality improvements among Black Americans were particularly strong in economically disadvantaged areas. Better healthcare, food and nutrition programs, and lower rates of smoking were all potential contributing factors, according to Schwandt and Currie.  A deeper investigation into mortality rates by race and ethnicity could also offer suggestions for how to better address the widening gap in Black-White life expectancies due to COVID-19. 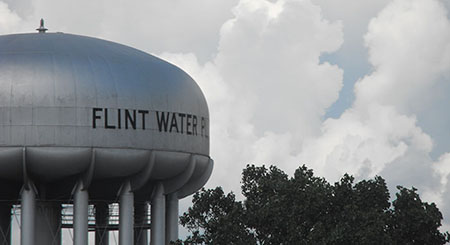 The images of Texans boiling water during the state’s catastrophic power and water outages this February highlight the importance of access to clean and safe drinking water for all Americans. Such water insecurity has particularly impacted underserved U.S. communities, such as in Flint, Michigan, where its water supply was shut off due to dangerous levels of lead and where more than half of its population identifies as Black. Beyond the headlines, IPR anthropologist Sera Young points out that policymakers and researchers need reliable data sources to understand what’s going on with water security in the U.S. and how many Americans are affected by it. She and a team of international researchers have developed the Household Water Insecurity Experiences Scale (HWISE) to do just that. Though initially HWISE was developed to measure water insecurity experiences in low- and middle-income countries, she proposes that U.S. agencies and departments like the Environmental Protection Agency and Department of Agriculture could use it and in doing so, help the U.S. to become a leader in water security by:

By prioritizing U.S. water security research, funding, and policy, the Biden administration can advance equity and reduce the potential health disparities between communities.