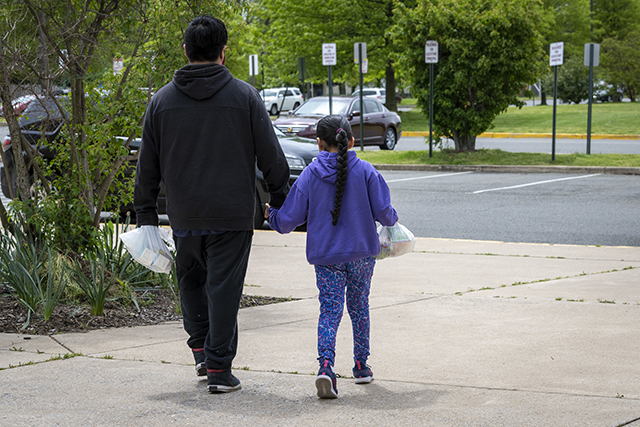 A middle school in Arlington, Virginia provides families with meals during COVID-19, particularly for those eligible for free- or reduced-priced meals.

We find that food insecurity rates and related measures of food hardship are elevated for all groups, and there is some evidence they have improved in recent weeks among White households. We also explore additional household economic measures and find that substantial shares—especially among Blacks and Hispanics—are worried about their incomes and ability to afford the goods they need over the next four weeks. Together, these indicators paint a picture of substantial and disparate economic hardship during the COVID-19 era.

Data collected during the COVID-19 crisis indicate that rates of food insecurity and other measures of food hardship in households with children are dramatically elevated compared with pre-COVID levels. In addition, Black and Hispanic households with children are much more likely to experience food hardships than are White households with children. Other measures, including current employment status, as well as expectations about future income losses and the ability to afford necessities, also show important disparities across racial and ethnic groups. As others have argued, these patterns indicate the need for continued relief payments until the economy rebounds, such as increased SNAP and Unemployment Insurance payments.

The Census Household Pulse Survey has been providing timely information on a range of measures during the COVID-19 crisis. Unfortunately, it is scheduled to cease releasing new data in the coming weeks. To continue to monitor real-time impacts of COVID-19 and devise appropriate policy solutions, we encourage Congress to authorize an extension of the data collection.