Instances of police use and misuse of force are national news stories, as is the rise in gang violence in cities like Chicago. But what drives groups to violence, and is it possible to intervene and prevent it? IPR researchers have some answers. 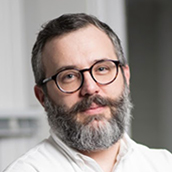 Sociologist Andrew V. Papachristos’ research aims to understand how the connected nature of cities affect what we feel, think, and do. His main area of research applies network science to the study of gun violence, police misconduct, illegal gun markets, street gangs, and urban neighborhoods.

Co-led by IPR sociologist Andrew Papachristos and David Hureau of the University at Albany, the survey draws attention to the high exposure to violence that street outreach workers face on the job. The researchers find that 60% of violence intervention workers in Chicago have witnessed a shooting attempt, 32% have seen someone else get shot while at work, and 20% have been shot at while at work. Another 2% have been shot at and injured on the job.

Identifying Networks of Cops Engaging in Misconduct and Criminal Behavior

New research led by IPR sociologist Andrew Papachristos identifies hidden networks of officers engaging in misconduct and criminal behavior within police organizations. The study reveals that police misconduct is a group phenomenon contributing to a disproportionate number of arrests in minority communities.

Papachristos and his co-authors used insights from three known cases of police corruption—including the ongoing case of ex-Chicago Police Sergeant Ronald Watts, whose team ran an extortion racket at a Chicago housing project for more than a decade—to create a statistical model to identify possible crews of cops engaging in misconduct and, at times, criminal behavior. The model was then used to analyze publicly available complaint and arrest data on Chicago police officers from 1971 to 2018.

A report by the Northwestern Neighborhood & Network Initiative (N3) looks at the impact of Communities Partnering 4 Peace (CP4P), a Chicago collaboration of outreach and victim services organizations. N3 finds that CP4P has served about 3,600 people since July 2017. N3 concludes, preliminarily, that CP4P successfully locates those people at highest risk of being victims of gun violence, potentially increases positive outcomes such as more education and employment, and potentially reduces the risk of involvement in gun violence.

The Northwestern Neighborhood & Network Initiative (N3) examines 234 men who entered the CRED program in 2019 from Roseland and West Pullman in a report. Early results suggest that CRED (a) successfully locates high-risk populations, (b) successfully connects participants to intensive programming, and (c) potentially reduces the risk of involvement of gun violence of its participants in the short term. Overall, the number of fatal and non-fatal gunshot injuries across all CRED participants decreased by nearly 50%, and the number of arrests for violent crimes fell 48% in the 18 months following the start of participation in the program.

N3's report on the Chicago Neighborhood Policing Initiative (CNPI) finds challenges arose due to the pandemic, aftermath of George Floyd, and Chicago’s high rates of shootings and gun deaths.  However, N3 also found that the police and community participants show some positive changes, such as greater police visibility, more police attention to community concerns, and, most importantly, more meaningful interpersonal interactions between residents and police officers.

This N3 report identifies how a street outreach program run by Chicago CRED (Creating Real Economic Destiny) not only identifies but also engages such individuals. It details the experiences of participants in the program, highlighting how they perceive the violence that surrounds them, as well as why they joined and choose to stay in CRED.

A Network Analysis of Three Weekends of Shootings in Chicago, June 18–July 5

This report examines the shootings and homicides that occurred during one of the most severe upticks of gun violence in 2020—the two-week period between Father’s Day and the Fourth of July Weekend, June 18 to July 5, 2020. By delving more deeply into this period, the report aims to illustrate how understanding the networks in which gun violence occurred during an especially deadly outbreak of violence might inform policy and practice.

N3’s latest report shows that in 2019 the average age of a homicide victim in Chicago was 29 years of age and the median age was 27 years old, meaning that a typical homicide victim is in his or her 20s. Over the past decade, the median has fluctuated between 24 and 28 years old, and Chicago has seen a 71% decrease in the number of victims 12 or younger since the 1990s.

Review of the Evanston Police Department’s Use of Force Policy

The Northwestern Neighborhood and Network Initiative (N3) delivered a report to the City of Evanston reviewing its use of force policy and data for its police department, offering recommendations to strengthen the policy, which in turn, may lead to additional reforms aimed at greater equity, transparency, and accountability. The report was discussed at a city council meeting and is being reviewed by Evanston’s Human Services Committee.

As the research partner for CP4P, the Northwestern Neighborhood & Network Initiative (N3) uses quantitative and qualitative methods to study its impact.  While analysis of administrative and survey data illuminates a wide range of behaviors and outcomes, they cannot fully describe the full spectrum of potential participant outcomes. Therefore, CP4P and N3 launched a qualitative study to provide a more holistic account of participants' lives and experiences with street outreach.

In January 2019, the Chicago Police Department (CPD) in collaboration with the Policing Project at New York University School of Law launched the Chicago Neighborhood Policing Initiative (CNPI). As CNPI’s research and evaluation partner, the Northwestern Neighborhood & Network Initiative (N3) began evaluating CNPI during the initial rollout, and has found results that suggest both community and police believe CNPI to be useful for building trust and fostering meaningful community engagement.

IPR sociologist Andrew Papachristos, IPR postdoctoral fellow George Wood, and Yale’s Tom Tyler conducted a rigorous evaluation of whether training nearly 8,500 officers in procedural justice strategies from January 2012 to March 2016 would reduce use of force. Published in the Proceedings of the National Academy of Sciences, the procedural justice model emphasizes listening and responding to people in the community, and treating the public with dignity, courtesy, and respect.

In the summer of 2017, eight outreach organizations in Chicago joined together to create a comprehensive, long-term intervention to combat gun violence and gang activity. The initiative, Communities Partnering 4 Peace (CP4P), partnered with Northwestern’s Neighborhood and Network Initiative (N3), is mobilizing a four-pillar approach to violence. This brief presents preliminary results of a community-level analysis, looking at what happened to gun violence trends in CP4P treatment communities from 2017–19.

A recent analysis by IPR sociologist Andrew Papachristos and his colleagues of police officers’ work networks finds that officers who worked with others who were accused of misuse of force were more likely to also be involved in misuse of force.

The Network Structure of Police Misconduct

In research published in Nature Human Behaviour, IPR sociologist Andrew Papachristos, IPR postdoctoral fellow George Wood, and Daria Roithmayr of the University of Southern California discover that police misconduct is concentrated in networks. They explore the role of gender, race, and tenure in the networks and recommend steps to decrease complaints against officers.

Civilian allegations can predict which police officers pose the highest risk for serious misconduct. The allegations can serve as an early warning system to reduce misconduct and save cities money, according to a study co-authored by law professor and IPR associate Max Schanzenbach.