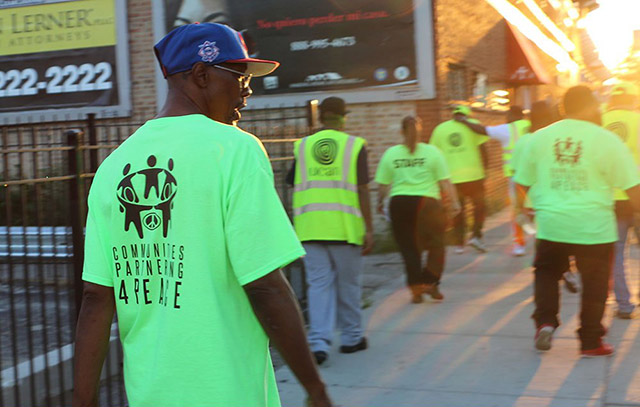 When Communities Partnering 4 Peace (CP4P) launched a new partnership among several leading outreach organizations aimed at reducing gun violence in Chicago, some resistance was expected. In many cases, researchers from the Northwestern Neighborhood and Network Initiative (N3) heard it directly from CP4P’s program participants.

“When I first came in [to the program], I’ll tell them straight up I didn’t think it was going to help,” said Maurice, a participant whose name has been changed for privacy. “I still came in with an attitude like, ‘I don’t give a f*** about this.’”

But that attitude soon changed. In a new report on the Communities Partnering 4 Peace (CP4P) program, launched in nine neighborhoods plagued by gun violence across the city, N3 researchers find that being exposed to the program and its street outreach workers had a profound effect on Maurice and others like him: They came to see those workers as heroes, mentors, and surrogate family.

“For many participants, their outreach workers became a powerful nudge for positive change. They offered hope and redirection in challenging times,” said Dawna Leggett, PhD, one of the report’s co-authors and N3 senior project manager.

N3 has already released preliminary research on the program’s quantitative outcomes, finding that its implementation has been associated with a decrease in gun violence. With this new report, they provide a qualitative study meant to provide a more holistic account of participants’ lives and experiences with street outreach.

They find that participants describe outreach workers as providing two main services: emotional coping and support, and connecting them with resources and opportunities. For the former, that can take the form of offering help during dark times, intervening consistently during moments of violence, and serving as positive mentors. The latter can take the form of providing social services and recreation, offering legal support, or promoting community service.

The report highlights the experience of Maurice, the pseudonymous participant who was initially reluctant to embrace the program. Maurice suffered a brutal physical attack that he later learned was at the hands of a group of men he had considered childhood friends; distrust, anxiety, depression, and post-traumatic stress disorder (PTSD) set in soon after.

Maurice met Trey, a CP4P outreach worker, a month later. Trey connected Maurice, an aspiring rapper, with a program that focused on art and music, setting up equipment, and learning about music production. He also connected Maurice with CP4P’s discussion circles, where participants could talk about their days and their lives.

“It was a lot of learning to be around other young men coming from the same struggles as me and this positive energy,” Maurice said in the report. “[B]efore the program, everybody talked about killing and guns. They open doors that was locked, that we didn’t know how to open.”

Maurice said that having an outreach worker push him made the difference between the despair he previously felt and the personal trajectory he is on now. The consistent intervention, social mentorship, and connections with social services offered by CP4P, in Maurice’s telling, made the difference between pushing forward after his violent incident and remaining depressed and isolated.

“When I was really down, they came through. They showed as much love as they could,” Maurice said. “I appreciated that because it could be rough times. It could be good days, bad days, lost friends.”

“Other times, you think nobody is on the side of you. [But] While you [are] sitting there shedding tears, they would always call.”