Browse policy briefs below or find more briefs in our archive. 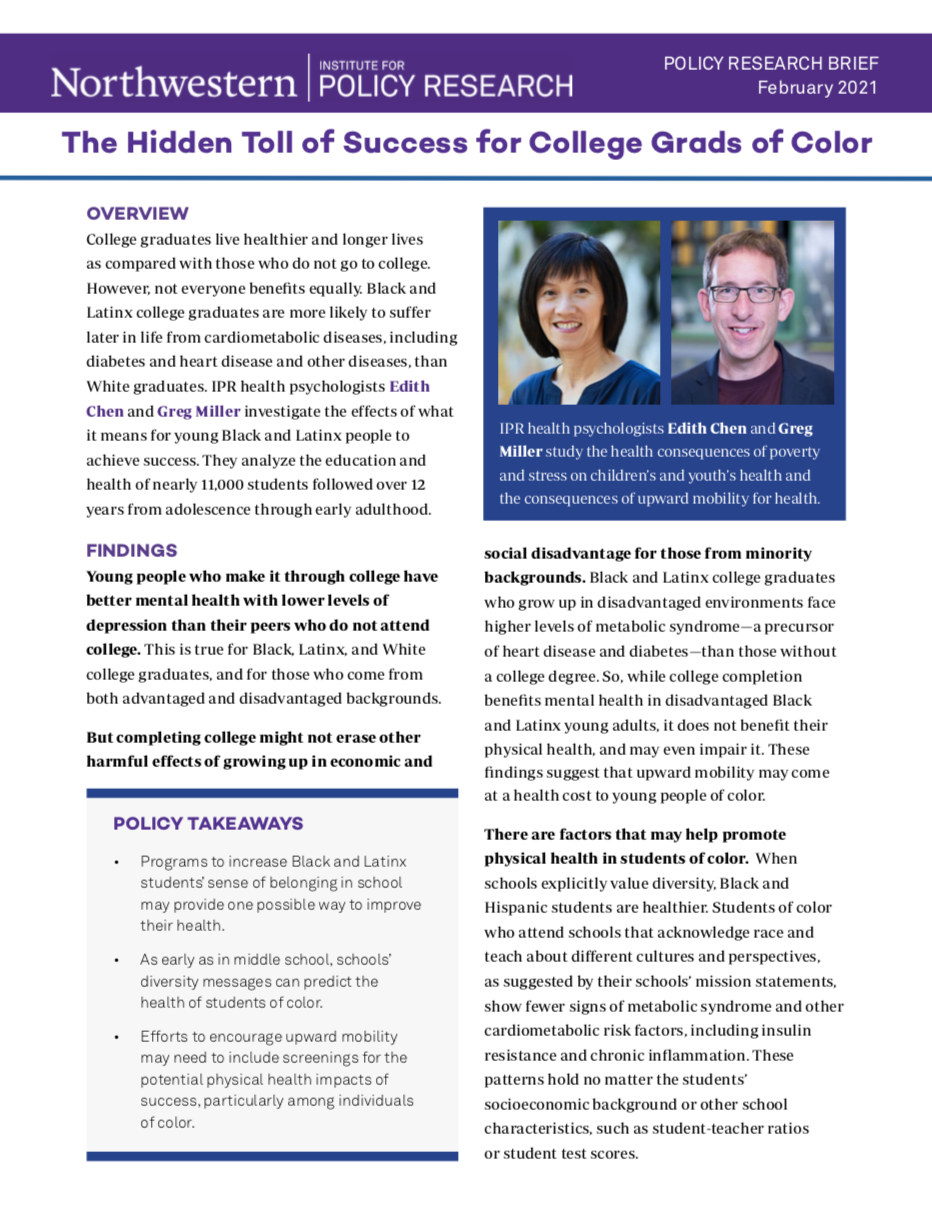 The Hidden Toll of Success for College Grads of Color

By Edith Chen and Greg Miller

College graduates live healthier and longer lives as compared with those who do not go to college. However, not everyone benefits equally. Black and Latinx college graduates are more likely to suffer later in life from cardiometabolic diseases, including diabetes and heart disease and other diseases, than White graduates. IPR health psychologists Edith Chen and Greg Miller investigate the effects of what it means for young Black and Latinx people to achieve success. They analyze the education and health of nearly 11,000 students followed over 12 years from adolescence through early adulthood. 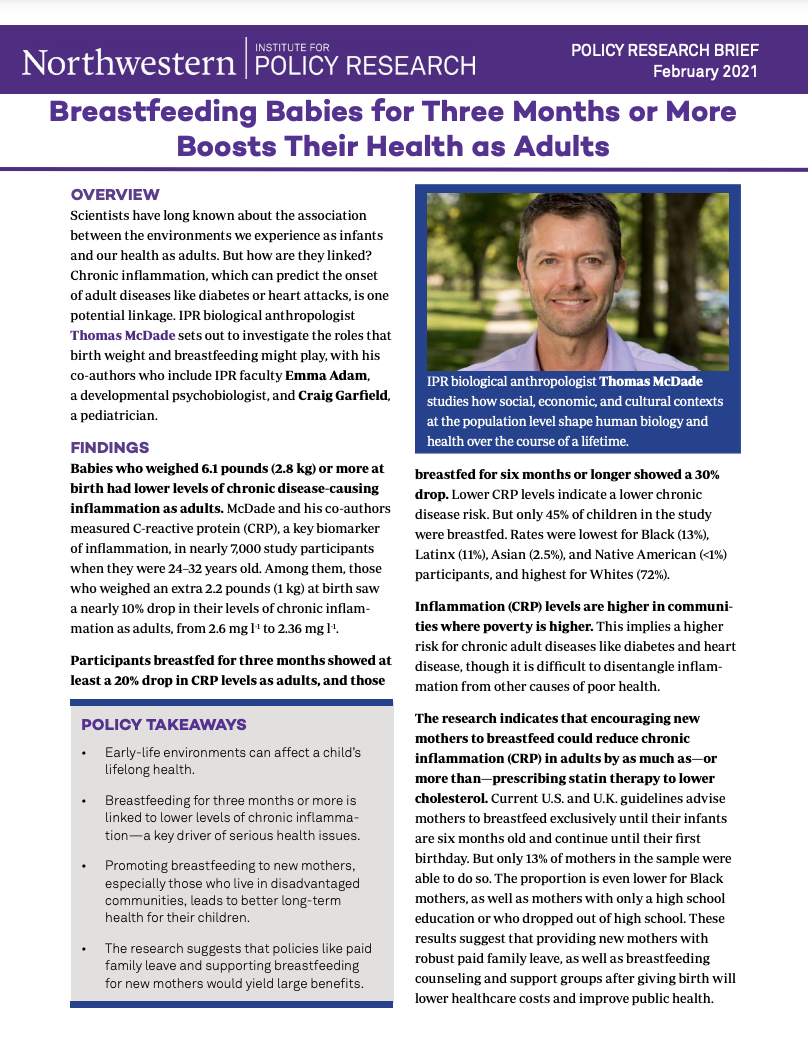 Scientists have long known about the association between the environments we experience as infants and our health as adults. But how are they linked? Chronic inflammation, which can predict the onset
of adult diseases like diabetes or heart attacks, is one potential linkage. IPR biological anthropologist Thomas McDade sets out to investigate the roles that birth weight and breastfeeding might play in adult health. He and his colleagues show that infants who breastfed for three months or more had substantial reductions in levels of inflammation, a key driver serious health issues, in adulthood. 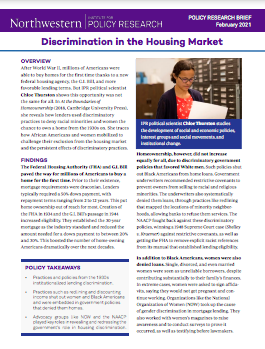 Discrimination in the Housing Market

Are government housing practices fair? After WWII, millions of Americans bought homes for the first time thanks to the standardization of 30-year mortgages. IPR political scientist Chloe Thurston explains how many minorities and women were shut out of the housing market due to discriminatory government policies and how they fought for homeownership through advocacy groups like the NAACP and NOW. 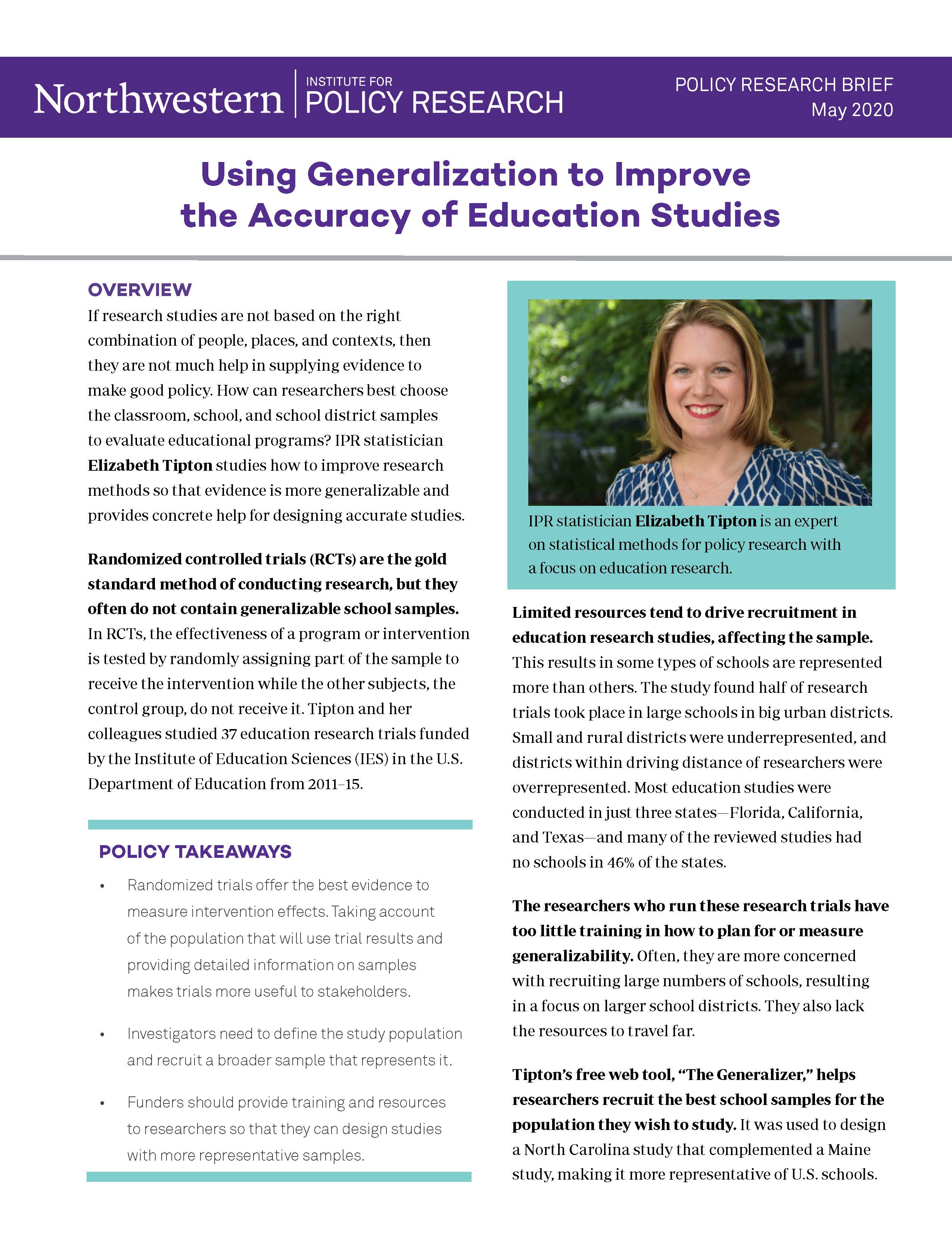 Using Generalization to Improve the Accuracy of Education Studies

If research studies are not based on the right combination of people, places, and contexts, then they are not much help in supplying evidence to make good policy. How can researchers best choose the classroom, school, and school district samples to evaluate educational programs? IPR statistician Elizabeth Tipton studies how to improve research methods so that evidence is more generalizable and provides concrete help for designing accurate studies. 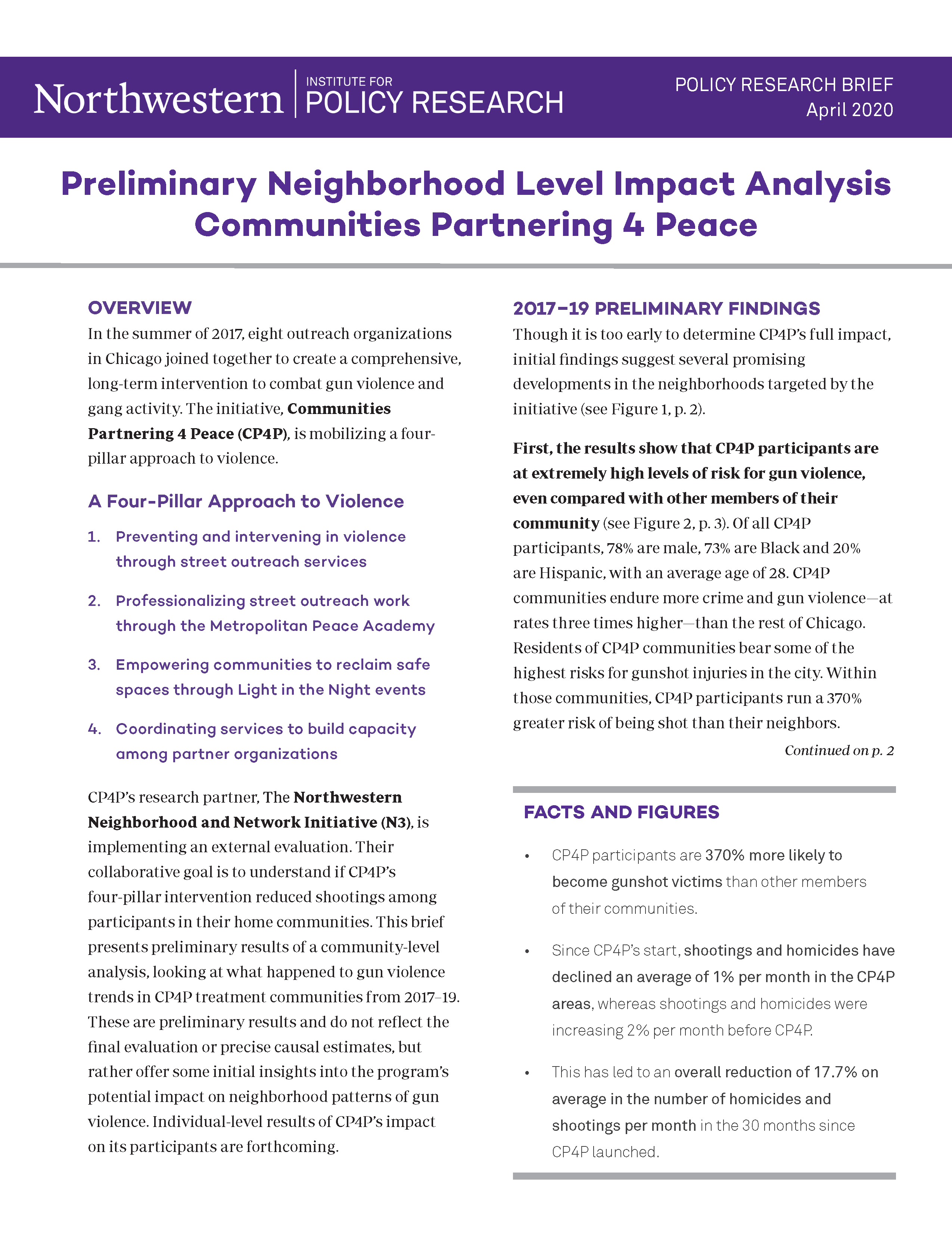 In the summer of 2017, eight outreach organizations in Chicago joined together to create a comprehensive, long-term intervention to combat gun violence and gang activity. The initiative, Communities Partnering 4 Peace (CP4P), is mobilizing a four-pillar approach to violence. This brief presents preliminary results of a community-level analysis, looking at what happened to gun violence trends in CP4P treatment communities from 2017–19. 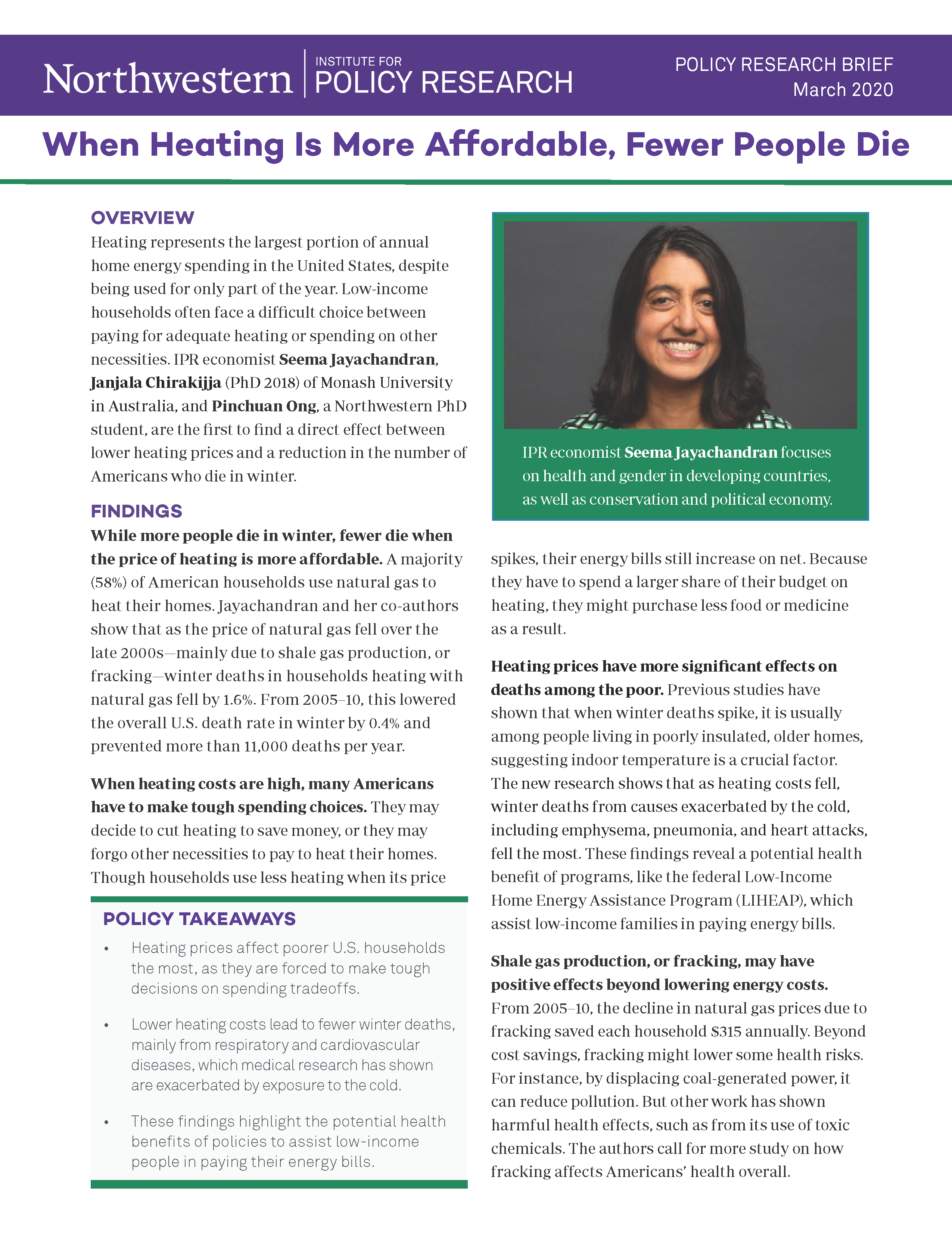 Heating represents the largest portion of annual home energy spending in the United States, despite being used for only part of the year. Low-income households often face a difficult choice between paying for adequate heating or spending on other necessities. IPR economist Seema Jayachandran, Janjala Chirakijja (PhD 2018) of Monash University in Australia, and Pinchuan Ong, a Northwestern PhD student, are the first to find a direct effect between lower heating prices and a reduction in the number of Americans who die in winter. 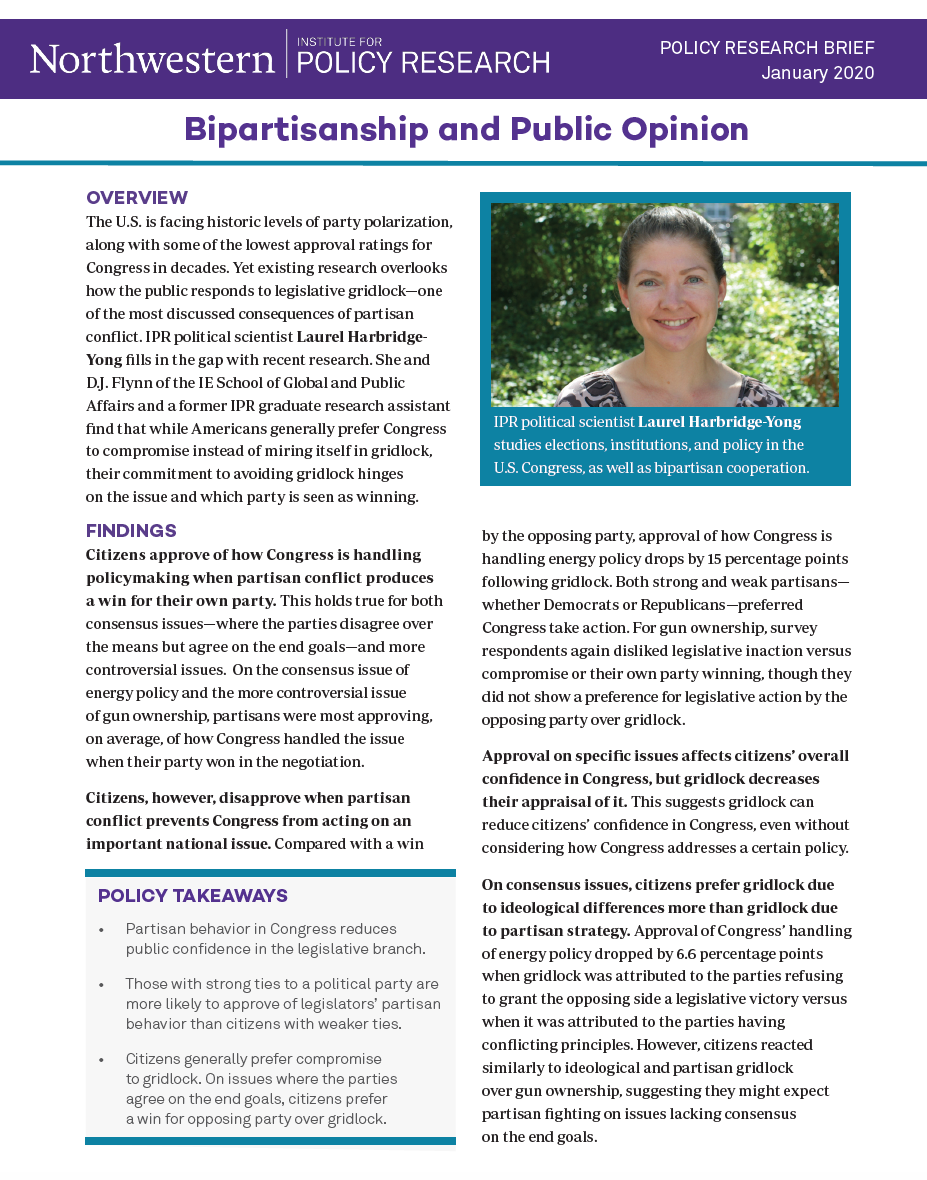 By Laurel Harbridge-Yong and D.J. Flynn

The U.S. is facing historic levels of party polarization, along with some of the lowest approval ratings for Congress in decades. Yet existing research overlooks how the public responds to legislative gridlock—one of the most discussed consequences of partisan conflict. In a study, IPR political scientist Laurel Harbridge-Yong and D.J. Flynn of the IE School of Global and Public Affairs find that while Americans generally prefer Congress to compromise instead of miring itself in gridlock, their commitment to avoiding gridlock hinges on the issue and which party is seen as winning. 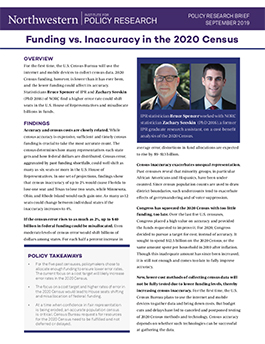 Funding vs. Inaccuracy in the 2020 Census

By Bruce Spencer and Zachary Seeskin

The U.S. Census Bureau continues to prepare to launch the 2020 Census on April 1, as mandated by the U.S. Constitution. In a recent working paper, statisticians Bruce Spencer of IPR and Zachary Seeskin of NORC (PhD 2016) weigh the importance of taking an accurate census count versus the financial expense of gathering information for the census. They find that while census accuracy is expensive, is it crucial. The census determines how many representatives each state gets and how federal dollars are distributed. Census error, exacerbated by past funding shortfalls, could easily shift seats in the U.S. House of Representatives and misallocate billions in federal funding, due to an inaccurate count. 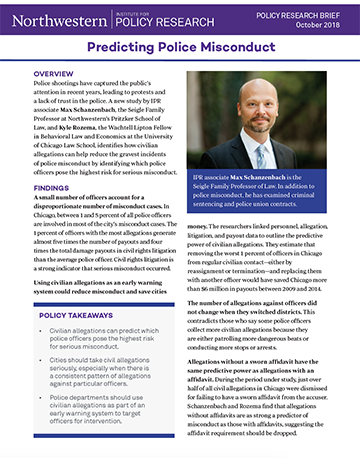 By Max Schanzenbach and Kyle Rozema

Police shootings have captured the public’s attention in recent years, leading to protests and a lack of trust in the police. A new study by IPR associate Max Schanzenbach, the Seigle Family Professor at Northwestern’s Pritzker School of Law, and Kyle Rozema, the Wachtell Lipton Fellow in Behavioral Law and Economics at the University of Chicago Law School, identifies how civilian allegations can help reduce the gravest incidents of police misconduct by identifying which police officers pose the highest risk for serious misconduct 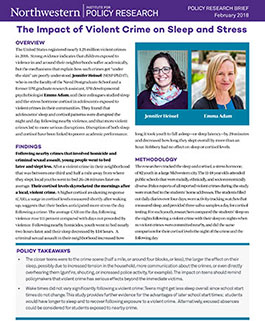 The Impact of Violent Crime on Sleep and Stress

By Emma Adam and Jennifer Heissel

The United States registered nearly 1.25 million violent crimes in 2016. Strong evidence indicates that children exposed to violence in and around their neighborhoods suffer academically, but the mechanisms that explain how such crimes get “under the skin” are poorly understood. Jennifer Heissel (SESP PhD 17), who is on the faculty of the Naval Postgraduate School and a former IPR graduate research assistant, IPR developmental psychobiologist Emma Adam, and their colleagues studied sleep and the stress hormone cortisol in adolescents exposed to violent crimes in their communities. They found that adolescents’ sleep and cortisol patterns were disrupted the night and day following nearby violence, and that more violent crimes led to more serious disruptions. Disruption of both sleep and cortisol have been linked to poorer academic performance. 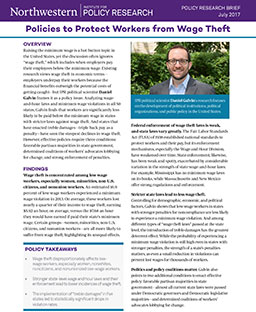 Raising the minimum wage is a hot-button topic in the United States, yet the discussion often ignores “wage theft”, which includes when employers pay their employees below the minimum wage. Existing research views wage theft in economic terms—employers underpay their workers because the financial benefits outweigh the potential costs of getting caught—but IPR political scientist Daniel Galvin frames it as a policy issue. Analyzing wage- and-hour laws and minimum wage violations in all 50 states, Galvin finds that workers are significantly less likely to be paid below the minimum wage in states with stricter laws against wage theft. And states that have enacted treble damages—triple back pay as a penalty—have seen the steepest declines in wage theft. However, effective policies require three conditions: favorable partisan majorities in state government, determined coalitions of workers’ advocates lobbying for change, and strong enforcement of penalties. 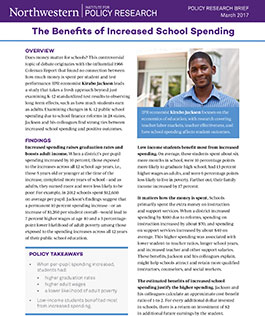 The Benefits of Increased School Spending

Does money matter for schools? This controversial topic of debate originates with the influential 1966 Coleman Report that found no connection between how much money is spent per student and test performance. IPR economist Kirabo Jackson leads a study that takes a fresh approach beyond just examining K-12 standardized test results to observing long-term effects, such as how much students earn as adults. Examining changes in K-12 public school spending due to school finance reforms in 28 states, Jackson and his colleagues find strong ties between increased school spending and positive outcomes. 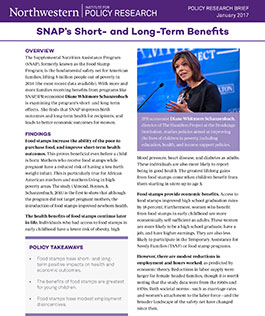 The Supplemental Nutrition Assistance Program (SNAP), formerly known as the Food Stamp Program, is the fundamental safety net for American families, lifting 5 million people out of poverty in 2014 (the most recent data available). With more and more families receiving benefits from programs like SNAP, IPR economist Diane Whitmore Schanzenbach is examining the program’s short- and long-term effects. She finds that SNAP improves birth outcomes and long-term health for recipients, and leads to better economic outcomes for women. 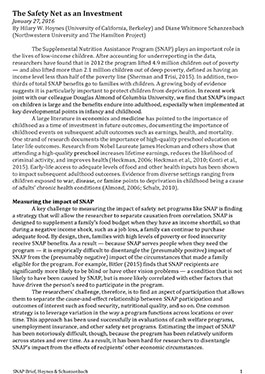 The Safety Net as an Investment

The Supplemental Nutrition Assistance Program (SNAP) plays an important role in the lives of low-income children. After accounting for underreporting in the data, researchers have found that in 2012 the program lifted 4.9 million children out of poverty—and also lifted more than 2.1 million children out of deep poverty, defined as having an income level less than half of the poverty line. In addition, two-thirds of total SNAP benefits go to families with children. A growing body of evidence suggests it is particularly important to protect children from deprivation. In recent work the authors find that SNAP’s impact on children is large and the benefits endure into adulthood, especially when implemented at key developmental points in infancy and childhood.