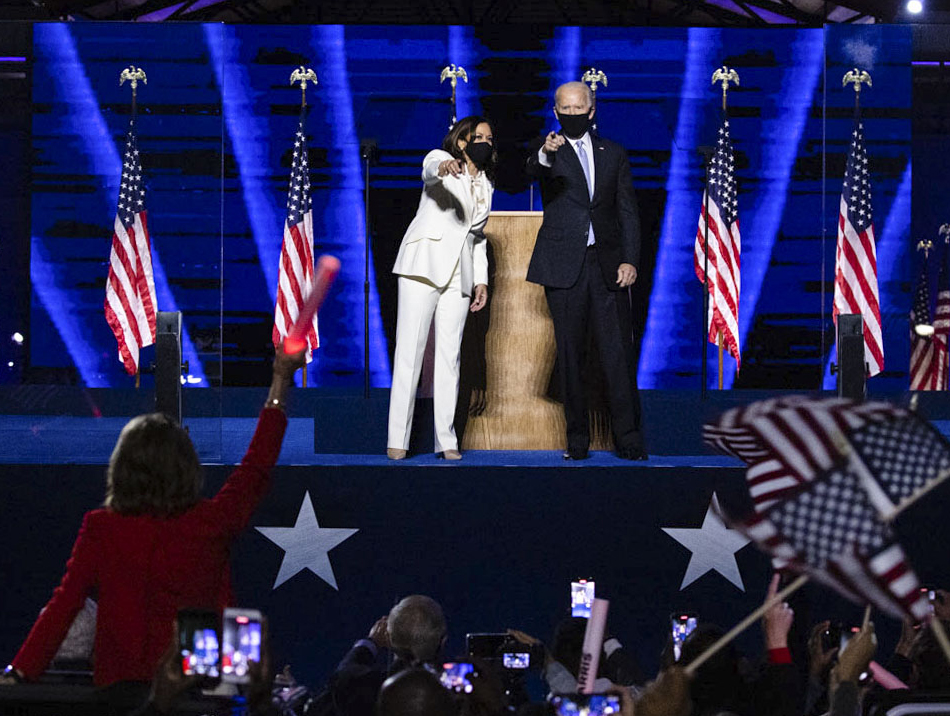 As President-Elect Joe Biden continues to fill out his incoming administration, policy priorities are taking shape. IPR asked its experts what policy advice they would offer to the new administration based on their research. The interdisciplinary proposals cover a wide range of education, nutrition, tax, employment, and other public policies.

“These proposals highlight the breadth and depth of the work we do at IPR,” said Diane Whitmore Schanzenbach, IPR director and economist. “We are fortunate to have such an esteemed group of experts—some of whom have been working to understand these issues for decades or longer—provide evidence-based solutions to the challenges we face.”

Public Policy: Mandating Masks on Federal Property to Save Lives

When Biden and Harris step into office on January 20, combating the pandemic will be Job #1. Public health experts and epidemiologists have clearly established that wearing masks saves lives, but as research by IPR political scientist James Druckman has shown, choosing to wear a mask can vary by a person’s race and political views, and some states have resisted issuing mask mandates. Druckman, therefore, suggests that the new administration mandate mask-wearing on all government buildings and properties. He argues this kind of federal policy could become a model for the country and clearly show the new administration is doing everything in its power to manage the pandemic. Plus, in surveys he finds most Americans support restrictive measures to curb the spread of COVID-19, with mask wearing having increased significantly since April—though social distancing has decreased.

IPR sociologist Monica Prasad proposes that the administration eliminate the stepped-up basis loophole in U.S. income tax. Prasad, who has studied tax policy as part of the Republican Party’s strategy, offers an example: Imagine that Molly Millionaire buys a stake in Oligarchic Oil in 1980 for $100,000. When she dies in 2010, it is now worth $1,000,000, and is inherited by her daughter Millie. Millie sells it immediately, but pays no income tax on the $900,000 it gained in value because of the stepped-up basis provision. Meanwhile, if Amy Average earns $30,000 per year between 1980 and 2010, she also makes $900,000 over that time, but pays a big chunk in income tax. So she has much less to pass on to her daughter Annie. Proponents of the loophole say it is difficult to verify an asset's original value, but the current era of digital records and professionally managed assets indicates otherwise. Prasad says the loophole benefits the wealthy, encouraging them to hold on to assets, as well as depriving the government of revenue for much-needed programs to help less wealthy Americans.

Once in office on January 20, Biden will face very narrow majorities in both chambers of Congress. Regardless of who wins the runoff elections for Georgia’s Senate seats, slim majorities and the possibility that the parties will split control of the House and Senate mean that lawmakers will have to compromise to address pressing policy problems. To encourage compromise, IPR political scientist Laurel Harbridge-Yong suggests Biden should meet with legislators on both sides of the aisle and consider conducting more private negotiations between bipartisan groups to free up legislators to consider difficult concessions. Though many legislators worry that supporting policy compromises may be electorally risky, her recent book highlights that legislators may have an outsized fear of electoral punishment for compromising. Her research shows most voters, even those in primaries, reward legislators who compromise to prevent gridlock.

When designing programs and policies, policymakers should rely on evidence to guide them so that they make informed decisions that lead to better outcomes for the participants and can avoid wasting taxpayers’ money. But if research studies are not based on the right combination of people, places, and contexts, then they are not much help in supplying evidence to make good policy. For example, when it comes to education policy, how can researchers best choose the classrooms, schools, and school districts to include in evaluations of educational programs? IPR statistician Elizabeth Tipton, who focuses on the development of evidence-based policy systems, offers that the administration could hold agencies and departments accountable for building evidence systems that well represent the populations in need of evidence. This involves building infrastructure for sustained connection between policy and science, including the development of tools and resources that can be used across agencies to establish and meet those standards.

Gun violence victimizes over 60,000 people each year in the United States, and several U.S. cities are experiencing increases in 2020.  In a Nature study, IPR sociologist Andrew Papachristos and New York University’s George Wood, a former IPR postdoctoral fellow, apply network science to find that both the participants and their close associates benefited from a community-based intervention program. This year also witnessed increased calls for community approaches to gun violence prevention and, as Papachristos and the Northwestern Neighborhood & Network Initiative (N3) show, several efforts, like Chicago’s Communities Partnering 4 Peace, continues to build the relationships necessary for effective violence prevention even during the COVID pandemic. Papachristos compares community-based violence interventions to contact tracing to slow the spread of the coronavirus. The administration, he points out, could direct efforts and resources to thousands of violence prevention organizations in cities across the country that leverage social networks to help stop gun violence.

Many children are not getting enough to eat during COVID. Research has established the importance to kids of having adequate resources in the early years that are critical to long-term development. Lifting children out of poverty and protecting them from economic shocks such as recessions should be a key priority for the new administration. We have existing programs that are not performing up to potential in this regard. For example, the WIC program provides supplemental food benefits to pregnant and breastfeeding women, infants, and children under age 5. While WIC has strong reach to infants, participation rates for children drop off dramatically. Increasing WIC’s participation rates among 2–4 year olds would help insure adequate nutrition and improve kids’ health in the short- and long-run. The Biden administration should set WIC participation targets for states and hold governors accountable for meeting them. An alternative approach could be to increase SNAP (formerly Food Stamp) benefits for families with young children by implementing a “young child multiplier.” Both approaches would help make sure that kids have access to the foods they need to flourish and grow.

Student debt loads and spiraling tuition are often seen as barriers to higher education, especially for students from marginalized backgrounds. Based on forthcoming research in social psychology, learning sciences, and higher education, IPR social psychologist Mesmin Destin recommends the Biden administration consider a set of policies to make higher education more accessible and responsive to an increasingly diverse student population. Increasing financial resources in certain areas can help on many fronts: They can help to reduce struggling students’ reliance on borrowing to pay for tuition. More funding would also encourage institutions to better train faculty on equitable teaching practices. As Destin’s research shows, marginalized students can benefit from approaches that honor their diverse backgrounds, and increased funding would allow universities to offer more community-building initiatives to improve college experiences, learning, and outcomes.

Even though the Supreme Court has not prohibited the limited consideration of race in college and university admissions, recent actions by the Trump administration have sowed needless uncertainty about its status, according to IPR sociologist Anthony S. Chen. He urges the Biden administration to issue clear guidance on how to take voluntary affirmative action in order to reap the educational benefits of diversity. In particular, he would encourage the civil rights units of the Department of Education and the Department of Justice to jointly reinstate and update the Obama administration’s 2011 guidance. Chen’s research reveals that university and college leaders have believed in the educational value of a diverse student body since the 1960s. Several generations of social-science research have largely validated their beliefs. Providing guidance to schools that wish to voluntarily take race-conscious affirmative action would help them do so legally and constitutionally.

Biden has promised to provide every middle and high school student a path to a successful career and not let a student’s ZIP code determine their achievements. IPR economist Jonathan Guryan recommends making intensive tutoring available to students on a widespread basis. He and experts from the University of Chicago’s Education Lab have been studying a partnership between SAGA Education and Chicago Public Schools. Their ongoing research shows that providing individualized, one-on-two math tutoring for an hour a day during the school day can substantially improve outcomes for high school students. The intensive math tutoring program has been proven to add up to two years of learning in math over a single school year for struggling high school students. A policy to implement the tutoring program on a large scale could provide necessary support to students who have fallen behind in their classwork during the COVID-19 pandemic.

High-quality early childhood education has profound effects on children’s development, but many U.S. children do not have access to it. Terri Sabol, an IPR developmental psychologist, proposes that the new administration should invest in free, universal prekindergarten for all three- and four-year-old children. Universal prekindergarten promises, she argues, to address current disparities in access to early childhood education. But beyond just increasing access, offering high-quality programs is key. Her researchdemonstrates that what young children “actually do” in early childhood classrooms establishes a strong foundation for learning. Additional elements include emotionally and instructionally supportive teachers who provide equitable learning environments for young students while teachers are supported through evidence-based professional development and paid a fair wage.

IPR policy experts Terese Eckrich Sommer and Lindsay Chase-Lansdale propose a federal two-generation education strategy to improve the economic fortunes of families in the United States. This policy bridges two traditionally siloed interventions: Head Start for children and career pathway training for adults at community colleges. For over a decade, Sommer and Chase-Lansdale have been evaluating a leading national two-generation education model with longer-term follow-up underway. Short-term findings show that parents in this two-generation program achieve higher levels of certification, career employment, and psychological wellbeing. Among children, the program was associated with improved attendance and better cognitive and social development for some. The researchers, therefore, propose a competitive federal grant program to further test and evaluate two-generation education programs nationwide. They estimate average cost-benefit ratios for training across a range of promising career fields of 1.3 within 5 years and 7.9 within 10 years if 10% of Head Start parents participate. Two-generation programs could become a national, family-focused strategy to improve the educational outcomes of children and parents at the same time and potentially boost intergenerational economic mobility in the United States.

Research by IPR developmental psychobiologist Emma Adam finds that racial discrimination serves as an important, and highly detrimental, stressor for adolescents. On the one hand, racial discrimination can affect their emotional wellbeing and even their biology, altering levels of the stress hormone cortisol. On the other, a strong ethnic identity promotes positive emotional wellbeing, stress hormone regulation, and higher academic performance. She recommends that all middle schools and high schools include a curriculum that embraces and celebrates the ethnic diversity of their students. Enriching curricula with positive representations of ethnic diversity and allowing students to explore and celebrate their own and other students' racial and ethnic backgrounds will have positive effects on their emotional and physical wellbeing and their academic performance.

The brain and body are establishing their homeostatic set points during the first months and years of life, and research by IPR psychologist Robin Nusslock, who uses neuroscientific methods to investigate brain systems, suggests that this is a period where stress will have its strongest effects. It also suggests that this period of early development is where intervention programs can have the biggest positive effects. Since preterm birth is associated with many negative health consequences over the course of a person’s life—including obesity, diabetes, high blood pressure, and heart disease—Nusslock advises the administration to implement programs targeting early development as they can significantly affect health disparities.