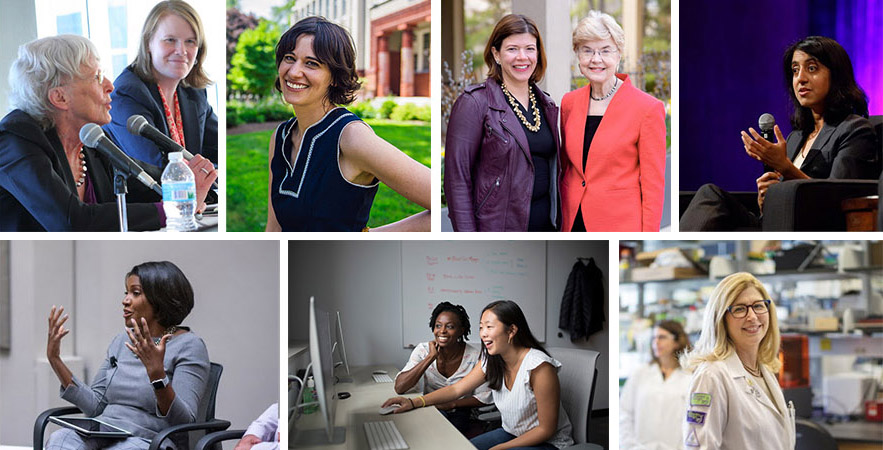 From sexism in the workplace and gender attitudes to understanding women’s fear of rape and why the Equal Rights Amendment failed, IPR faculty have pioneered vital research on women’s issues and gender roles across social, economic, educational, psychological, and health topics since its founding more than 50 years ago.

As the Northwestern community looks back at its milestone of “150 Years of Women” at the University, IPR celebrates its 50 years of outstanding women researchers and their influential research on women and gender issues.

“Northwestern has long recognized the value of diversity and interdisciplinarity as reflected in their hiring and support of such strong female scholars like those we have at IPR,” said Diane Whitmore Schanzenbach, IPR director and economist. “Their research is making important contributions to discussion and policymaking surrounding vital issues for women.”

IPR psychologist Alice Eagly has conducted trailblazing research into women and leadership that formed the basis for Through the Labyrinth: The Truth About How Women Become Leaders (2007), written with Linda Carli of Wellesley College, which weighs the reasons for why fewer than 7% of current Fortune 500 CEOs are women. They liken women’s trajectories to the top to navigating a labyrinth rather than encountering a glass ceiling, and they assess how various factors from organizational obstacles to women’s management styles still operate to limit women’s opportunities.

Eagly also studies stereotypes people hold about women and their capabilities, finding in a meta-analysis of the last 72 years of research that women are now perceived as equally competent as men, but that men are still presumed to have more leadership qualities.

A new generation of female researchers, as represented by IPR developmental psychologist Onnie Rogers, is also blazing down the research trail of racial and gender stereotypes. In a recent investigation, Rogers looks at girls in the United States and China to understand how the pressure to conform to masculine behaviors can affect their psychological well-being.

IPR’s examination of women’s and gender issues also extends to other countries: In India, entrenched gender attitudes are being altered, IPR development economist Seema Jayachandran discovers. A government program to develop adolescents’ support for gender equality succeeded in substantially increasing adolescents’ backing for it and also affected behavior. Another IPR development economist, Lori Beaman, shows that quotas for female representation in Indian village councils led to more women being elected and a reduction in prejudice against women leaders. Anthropologist Sera Young has tracked the debilitating effects of mothers’ and children’s malnutrition in developing countries, which led to the development of an innovative measure for water insecurity.

More and more women have stepped into the job market since the 1950s, but it is puzzling why women’s labor market participation has dropped relative to other countries in the Organisation for Economic Cooperation and Development (OECD) since 2000, as Schanzenbach uncovers in a chapter of the volume she co-edited, The 51%: Driving Growth Through Women’s Economic Participation (2017). She points to several factors at play, including a lack of affordable quality childcare and paid parental leave.

In addition to work opportunities, where a woman was born and whether or not she is married matters to her job and life prospects. The amount of sexism in the state where a woman was born can take a toll on her earnings and career prospects—even if she later moves to a less sexist state, according to research by IPR economist Jonathan Guryan.  Research by Christine Percheski, IPR social demographer, reveals that after the birth of their children, cohabiting mothers return to work sooner and work more hours than married mothers.

Women’s education also affects their family lives. Recent investigations by IPR sociologist Julia Behrman demonstrate that community-level declines in education where husbands have completed more school than wives, or “educational hypergamy,” in Kenya, Uganda, and Zimbabwe was linked to increased domestic violence. She suggests that the mechanism lies in men feeling their traditionally dominant role in the family under attack.

In her study of girls at non-elite schools in both the U.S. and Africa, How Girls Achieve (2019), IPR public policy expert Sally Nuamah explores the specific approaches schools need to take to promote girls’ educational excellence and makes the case for “feminist schools” that orient girls toward a lifetime of achievement. Simone Ispa-Landa, IPR sociologist, breaks down how gender and racial stereotypes affect black adolescents bussed from an urban to a suburban school; she finds that the black girls were stereotyped as “ghetto” and “loud” and were socially excluded.

Other IPR faculty have tackled more specific issues, such as sociologist and African American studies researcher Celeste Watkins-Hayes’ novel study of women with HIV/AIDS and oncofertility specialist and IPR associate Teresa Woodruff’s decisive hand in ensuring that sex is considered as a biological variable in basic science research at the National Institutes of Health.

Female faculty have played an essential role in extending IPR’s reputation as an interdisciplinary hub of policy-relevant research and collaboration: Three of its seven directors have been women, including its current director Schanzenbach, who stepped into the role in 2017, its third director, Margaret Gordon, who served from 1980–88, and its longest-serving director, Fay Lomax Cook, from 1995–2012.

The number of women at IPR has also grown: The first woman faculty member was sociologist Carol Owen, appointed in 1971—she was the only one of 22. Today, 27 of IPR’s 50 fellows are women.

Coming years will bring more research into women and their roles in the world. Though progress has been made, much remains to be done, as exemplified in two recent studies that Eagly conducted: While it is encouraging that children when asked to draw a scientist are more likely now than before to draw a female scientist, her recent study of gender stereotypes over the last 72 years, reveals that, “Men are still viewed as more ambitious, aggressive and decisive than women, and that agency stereotype has not substantially changed since the 1940s.”

Find out more about current IPR female fellows, or read more about these and other women scholars from IPR’s earlier years.