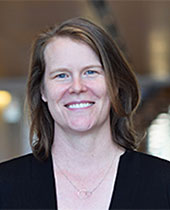 Economist Lori Beaman's research centers on two main themes. First, she examines how social networks affect economic decision making—particularly the dissemination of information in the labor market and agriculture—in the United States and developing countries. Second, Beaman studies constraints on women's participation in the economy and in politics.

Beaman is a member of the National Bureau of Economic Research (NBER), a junior fellow of the Bureau for Research in Economic Analysis and Development (BREAD), and an associate editor of the Journal of Development Economics. She received an Early Career Development (CAREER) Award in March 2013 from the National Science Foundation. The highly competitive award program recognizes promising young scholars with a demonstrated talent for integrating their research with educational activities.

Gender Differences in Recommendation Letters. Beaman is examining letters of recommendation for graduates of a top department in economics with IPR associate and linguistics scholar Rob Voigt. They will do a linguistic analysis to understand the differences between recommendations for men and women.

Economic Opportunities for Women. More than 75 percent of the world’s poor do not have a formal bank account, constraining their ability to save, borrow, and otherwise engage in financial operations that could improve their lives. Organizations are creating savings groups in developing nations as a way to meet such untapped needs. Women in the groups contribute to a group fund every week, then collectively decide if they should loan money from the fund to other group members, to be repaid with interest at a later date. Beaman was part of a group of cross-disciplinary researchers who conducted a large-scale randomized control experiment of a community savings program in rural Mali, West Africa. Freedom from Hunger and Oxfam’s Saving for Change (SfC) program integrates villager-managed saving and lending groups with local training and education. The program was offered to a random sample of 250 villages in Mali’s Ségou region. In an IPR working paper, Beaman and her colleagues show that women offered SfC in their village took out twice as many loans from their SfC program, saved about 30 percent more, and had less precarious food situations than those in nonSfC villages. They were also slightly less likely to seek loans from family and friends, a culturally shameful act.

Making Networks Work for Policy: Evidence from Agricultural Technology Adoption in Malawi. Beaman, Magruder, Ariel BenYishay of the College of William and Mary and A. Mushfiq Mobarak of Yale Business School investigate the potential for linking government extension agents in Malawi with the social networks that exist at the village level. The project identifies key contact farmers using detailed social network data and theoretical models of diffusion to spread new information to other farmers within a village. This project will test different strategies of identifying these key farmers, and the relative impact of those strategies on the diffusion of information, and ultimately adoption of conservation agriculture practices in the village as a whole.

Agricultural Microfinance in Mali. Agriculture is important for the world’s poor: Nearly 75 percent of those living on $1 a day live in rural areas. Despite rapid growth in agricultural productivity in many parts of the world, Africa has lagged behind and consistently makes fewer investments on their farms than in other regions. Lack of access to capital and funds provides one potential explanation. In this project, Beaman, with Bram Thuysbaert of Ghent University and Dean Karlan and Chris Udry of Yale University, has partnered with a local microfinance organization that provides agricultural loans to women farmers in southern Mali. In about half of the study villages, agricultural loans were offered to female farmers. These grants led to higher agricultural investments and profits, showing that liquidity constraints bind with respect to agricultural investment. In loan-villages, the researchers gave grants to a random subset of farmers who (endogenously) did not borrow. These farmers have lower—in fact, zero—marginal returns to the grants. Thus, the researchers find important heterogeneity in returns to investment and strong evidence that farmers with higher marginal returns to investment self-select into lending programs.

Beaman, L., S. Herskowitz, N. Keleher, and J. Magruder. 2021. Stay in the Game: A Randomized Controlled Trial of a Sports and Lifeskills Program for Vulnerable Youth in Liberia.  Economic Development and Cultural Change 70 (1): 129-158.

Beaman, L., and A. Dillon. 2018. Diffusion of agricultural information within social networks: Evidence on gender inequalities from Mali. Journal of Development Economics 133:147–61.

Beaman, L. 2012. Social networks and the dynamics of labor market outcomes: Evidence from refugees resettled in the U.S.. The Review of Economic Studies 79(1): 128–61.

Beaman, L., and A. Dillon. 2012. Do household definitions matter in survey design? Results from a randomized survey experiment in Mali. Journal of Development Economics 98(1):124–35. 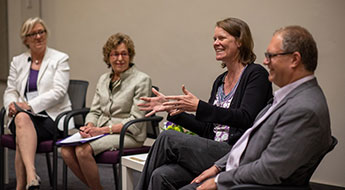 When Do Refugees Return Home? Evidence from Syrian Displacement in Mashreq (WP-21-32)