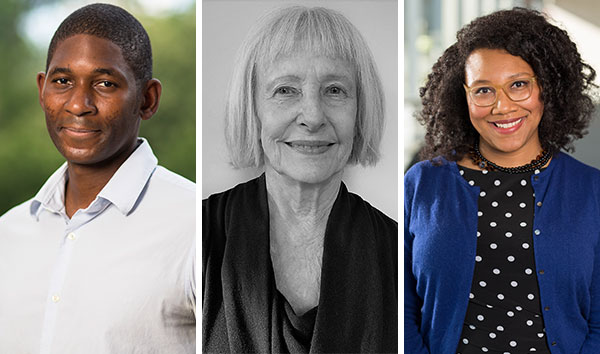 Additionally, IPR psychologist Sylvia Perry was selected as a fellow of the Center for Advanced Study in the Behavioral Sciences (CASBS) at Stanford University for 2022–23. The CASBS is known for identifying distinguished scholars early in their careers.

Kirabo Jackson: A Respected Expert in the Economics of Education

Jackson and three Northwestern University faculty members were selected to join the American Academy of Arts and Sciences, a longstanding and revered honorary society.

His election is the latest among Jackson’s remarkable scholarly achievements. In April 2022, the American Economic Journal: Economic Policy announced Jackson as its next lead editor, effective in January 2023. The journal is among the most esteemed academic journals in economics. He was also one of the youngest members ever elected to the National Academy of Education and won the Kershaw prize for best policy researcher under 40.

Alice Eagly: A Groundbreaking Scholar in the Psychology of Gender

Eagly is among 120 new members and 30 international members elected to the National Academy of Sciences for prominent and continuing achievements in the research community. Membership is one of the highest U.S. recognitions given to scientists.

Eagly has published widely on the psychology of gender and attitudes. Her research investigates attitude change and structure, women and leadership, the content of stereotypes, feminism and psychology, science and advocacy, and the psychological differences between women and men.

She has also written numerous articles and books, including Sex Differences in Social Behavior: A Social Role Interpretation (Psychology Press, 1987), The Psychology of Attitudes (SAGE Publications Ltd, 2010) with co-author Shelly Chaiken and Through the Labyrinth: The Truth About How Women Become Leaders (Harvard Business Review Press, 2007) with co-author Linda L. Carli.

Perry is an expert who studies racial bias and its impact on relations between people, such as interracial interactions between White doctors and minority patients and reducing racial bias.

Her lab, the Social Cognition & Intergroup Processes Laboratory, observes conversations between parents and children about race. She uses the findings to help inform the development of curricula for schools and to provide tools for parents to facilitate discussions of racial bias with their children.

Perry was also recently elected a fellow of the Association for Psychological Science in 2021 for her “sustained outstanding contributions to the science of psychology.” Fellows are first considered 10 years following their postdoctoral activity.

Kirabo Jackson is the Abraham Harris Professor of Education and Social Policy. Alice Eagly is the James Padilla Emerita Chair of Arts and Sciences. Sylvia Perry is an associate professor of psychology. All are IPR fellows.