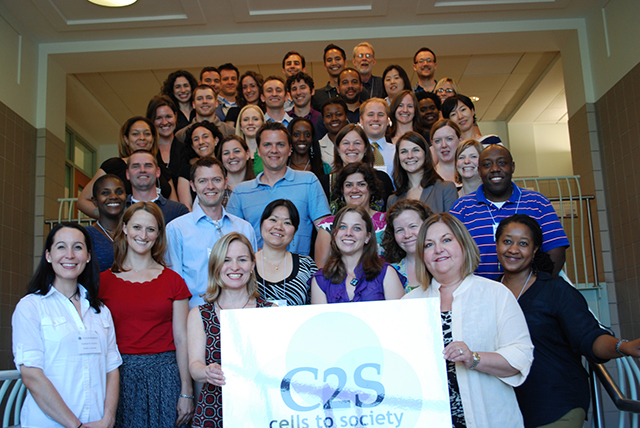 Cells to Society (C2S) launched in 2005 to understand how experiences shape biology. C2S also trains researchers in how to use biomarkers in studies (above the attendees and organizers of the 2011 biomarker training institute).

This is the fourth of a five-part series that will examine how IPR has grown and evolved in each decade. IPR Director Diane Whitmore Schanzenbach offers a preview of the June 6-7 anniversary conference here.

From its earliest years, the Institute for Policy Research has been committed to understanding poverty and crime and to finding the best policies and practices to mitigate their effects. Faculty researchers in the first decade of the 21st century continued the focus on key social policy issues—policing, illegal drugs, college affordability, public housing—with special focus on families in poverty and the incarcerated. During these years, IPR also built on its strong interdisciplinary structure to elevate education policy to a formal research program and to launch two state-of-the-art research centers. IPR also expanded its dissemination efforts, launching a series of policy research briefings to bring research findings directly to policymakers and the public.

Two large, IPR-led studies in the early 2000s examined children and families in the aftermath of the 1996 legislation that revamped welfare. Welfare, Children, and Families: A Three-City Study tracked the effects of welfare reform, which imposed work requirements, lifetime maximums on benefits, and sanctions for not following the rules, on 2,400 low-income families in Boston, Chicago, and San Antonio. IPR developmental psychologist Lindsay Chase-Lansdale, newly arrived at IPR in 1999 from the University of Chicago, was a co-director of the multiyear, ambitious research project.

“Coming to IPR made an enormous difference,” Chase-Lansdale said. “IPR’s nimbleness, the research community, the unbelievable students with whom  I was able to work as well as the colleagues . . . in addition to  the congenial, intellectual high standards—all of that gave me enormous feedback from the get go, from the early findings to later on.”

In a 2003 Science article, Chase-Lansdale and her colleagues published their findings after six years of study: They found that mothers’ transitions to work from welfare were not associated with negative outcomes for their preschool or young adolescent children, and in fact, adolescents showed positive outcomes when their mothers were employed.

The report recommended the state build and sustain work supports such as health insurance and childcare subsidies to those families in low-paying jobs, and it argued that the state should continue the policy of “stopping the time clock” on the lifetime limit on welfare benefits when people worked at least 30–35 hours.

IPR researchers delved into other issues at the intersection of poverty, race, and crime in the 2000s. In 2001, IPR sociologist and African American studies researcher Mary Pattillo organized a significant conference, “The Effects of Incarceration on Children and Families,” at Northwestern. U.S. incarceration rates had tripled since 1980 with approximately 2 million Americans behind bars. Though less than 1 percent of the entire U.S. population was behind bars in 2001, about 10 percent of black men in their late 20s were in prison.

“I planned the conference as a way to broaden my own education on the topic. Little did I know we were really in the early years of doing research on what my IPR and sociology colleague John Hagan labeled 'the collateral consequences' of mass incarceration, which has grown into quite a robust research field,” Pattillo recalled.

Participants examined the social costs of incarceration, especially to parenting, marriage, and family life. They also discussed how former felons fared in the labor market and how their experiences affected their political participation, as well as policy and research agendas for the future. These scholarly presentations led to the volume, Imprisoning America: The Social Effects of Mass Incarceration (RSF, 2002), that Pattillo co-edited and which included key contributions from then-IPR faculty sociologists Kathryn Edin, Jeff Manza, and Timothy Nelson.

IPR in the 2000s formed three new research programs that all reflect the experimental and quantitative sides of the social sciences. The increasing significance of research into interventions in education, the push for accountability embodied in the Bush administration’s No Child Left Behind legislation, as well as IPR’s long-standing commitment to studying educational outcomes, culminated in the formal creation of its research area on Education Policy in 2008.

“There is too little information about which education interventions are most effective in terms of student achievement and even costs,” Figlio noted in 2008. Since then, he and his fellow researchers are fulfilling what they set out to do—create “an even larger pool of rigorous research and policy-relevant solutions to address the pressing problems faced by teachers, students, and parents.”

Cells to Society (C2S): The Center on Social Disparities and Health

Around the same time, a new generation of IPR scholars—psychobiologist Emma Adam with biological anthropologists Thomas McDade and Christopher Kuzawa—were investigating some novel questions: How does experience get “under the skin”? How do our biology and our social lives interact? What is the impact of stress on health and wellbeing? And perhaps most importantly, did examining such questions even belong at IPR?

To explore the possibility of a new center, Adam and McDade joined Chase-Lansdale, then-director Fay Lomax Cook, Thomas Cook, and then-IPR economist Greg Duncan in San Francisco for extended conversations, with Nancy Adler and Tom Boyce, pioneering scholars at the University of California, San Francisco in this line of research.

“We spent two days brainstorming future directions, learning about the state of the science in terms of social factors and how they mattered to health and development,” McDade recalled. “We came out of that energized with some ideas about how to move C2S forward as an entity within IPR.”

“There's no way that this would have happened without the support of IPR,” he said.

Chase-Lansdale credits McDade, Adam, and Kuzawa for their “cutting-edge work,” noting that even as junior scholars then, they were leaders in their fields. She also pointed out that “it was the right time and the right moment with IPR as the home institution to bring together a new combination of life and biomedical scientists with social scientists and policy experts.”

Just over a year later, in June 2005, C2S launched. The following year, the new center received a five-year, R21 grant from the National Institute of Child Health and Human Development that helped establish C2S as an international locus for biomarker—key biological indicators— training and research. The center continues to address the questions of social influences on health, and to foster and translate research at Northwestern and nationally to reduce health disparities.

The Center for Quantitative Methods in Policy Research (Q-Center)

Drawn by the opportunity to work in policy research with scholars across disciplines, Hedges came to IPR and Northwestern from the University of Chicago in 2005. Within a year, he co-founded a new research program at IPR—the Q-Center—and two professional organizations for research methods.

“I saw the chance with a great group of policy researchers like those in IPR that there were going to be interesting methodological problems that that would deserve attention, and those are the opportunities for people who are research methodologists,” Hedges said. “Their problems are our opportunities, but you only find those problems when you work with good substantive researchers and IPR is full of them. So, it seemed like a marriage made in heaven.”

Co-chaired by Tom Cook, the Q-Center set out to improve designs, data collection, analysis, and synthesis in social policy research. The new center benefited from the strong tradition of methodological research and innovation at IPR in other areas. For example, economist Charles F. Manski’s work on non-parametric estimates of treatment effects clarified the role of assumptions that enable what is now known as “partial identification,” an approach he has continued to develop. Others include: statistician Bruce Spencer’s investigation of the design and evaluation of large-scale data programs, such as the U.S. Census; psychologist Alice Eagly’s work on meta-analyses on the psychology of gender and attitudes, and political scientist James Druckman’s methodological advances in experimental political science.

Both the Q-Center and C2S had training missions from their inceptions. The Q-Center launched two summer institutes, one on cluster-randomized trials in 2008, run by Hedges, and the Workshop on Quasi-Experimentation in 2010, under Cook’s leadership. Both have been funded by the National Center for Education Research in the Institute of Education Sciences (IES).

Kuzawa sees C2S’ innovative biomarker training workshops as a major contribution because they brought in hundreds of researchers from “a wide range of the disciplinary spectrum who were united in their interests in learning more about how to incorporate biology into their studies.” C2S will continue the workshops this summer under a new grant from the Russell Sage Foundation.

New faculty members have been drawn to the exciting interdisciplinary research the two centers sponsor. The vitality of C2S and the Q-Center continues as new research collaborations develop, new methods are developed, and new faculty participate.

As Hedges contemplates the future, he looks forward to new work and new blood: Statistician Beth Tipton, who joined IPR as a fellow in 2018, is “bringing new energy to the Q-Center.”

IPR health psychologists Edith Chen and Greg Miller have brought their groundbreaking research into the health consequences of poverty on children, and psychologist Robin Nusslock recently joined C2S as he explores how early life adversity affects the brain and immune system.

“The policy relevance of what we do is clear, especially since many of us have been taking our research in directions that inform policy,” McDade said. “I don't think anyone would question now that we belong within IPR and that we are a central part of the IPR intellectual community.”