The nation’s top higher education scholars dig into the role of money, financial aid, and other challenges

Read more about the symposium discussions and fireside chat. 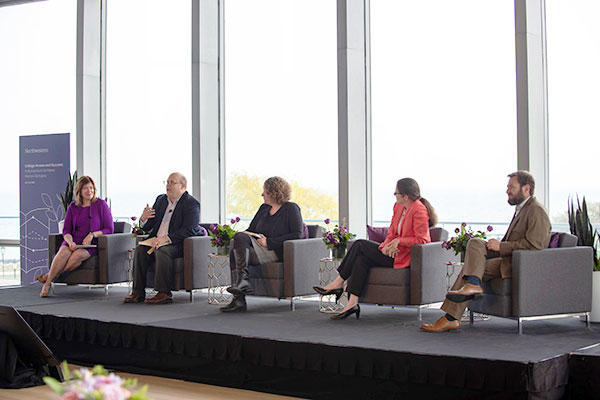 IPR Director and economist Diane Whitmore Schanzenbach kicked off “College Access and Success: A Symposium to Honor Morton Schapiro” on May 10 by introducing the first panel and detailing their major research themes. Schapiro is Northwestern University’s 16th president, whose tenure concludes on August 31.

“Each one of you has done a volume of cutting-edge work on how to promote college access and success, studying topics ranging a whole wide range—from supply and demand for higher education, for design of student aid, admissions policy, college quality, online learning—and that’s just scratching the surface,” she said.

She then dove into a subject of much research in the economics of education—the role of money.

Sarah Turner of the University of Virginia started off by acknowledging Schapiro’s influence on helping to create the field of economics of education.

“I thank Morty for being a pathbreaker and trailblazer and allowing economics of education and the economics of higher education to flourish,” she said.

Turner then turned to discussing her and others’ research that demonstrates that resources profoundly affect student outcomes, especially those of students from low-income and underrepresented backgrounds.

She noted, however, the great and growing inequality in how money is distributed among U.S. colleges and universities. The inequalities between the poorest and wealthiest institutions have increased by a factor of eight since the 1970s, and the increase has “big implications for how students from low-income and disadvantaged groups benefit from higher education.”

Turner explained that tuition, state appropriations, and private philanthropy are the three main sources of college and university funding. Net revenues from tuition have not risen much since institutions now devote more resources to financial aid. State spending for public universities dropped from a high of $10,000 per student since the late 1990s to about $7,500 per student by 2011. Donations and good management of endowments have benefited some wealthy universities enormously.

“The challenge that I see going forward is not about the overall supply of higher education in the U.S.,” Turner concluded. “But how do we increase the supply of really high-quality opportunities in postsecondary education?”

As a PhD student, she discovered Schapiro and Michael McPherson’s 1991 book, Keeping College Affordable (Brookings Institution Press), which led to her research into the Social Security Benefit Program that continued Social Security benefits to children of deceased, retired, or disabled parents if they went to college.

Dynarski discovered that students with deceased fathers, compared to students whose parents were alive, had a higher rate of college attendance, on the order of 15 to 20 percentage points.

“This was the first clue that—guess what—how you design, how you deliver, the money matters,” she explained. The social security program was “an upfront commitment” compared to the uncertainty of “our traditional financial aid system.”

She compared the current financial aid system to buying a car based on the sticker price and then only learning what the final price was after buying it.

“It’s too late to actually affect the decision of whether or not to apply to college and go to college,” Dynarski said. “The information needs to come earlier.”

Her research has led to policy changes, including Congress’ shortening the Free Application for Federal Student Aid (FAFSA) from 125 questions to about 30 in 2021. She also worked on a simplified financial aid program at the University of Michigan, where she was previously a faculty member. This included an upfront commitment to qualified students and led to enrolling an additional 150 low-income students per year.

“Financial aid is pretty central to my research, and on my mind, and I’ve appreciated the work that McPherson and Schapiro did in orienting me in the right direction and getting me started on this topic,” she said.

Bettinger became interested in testing whether removing barriers to accessing financial aid worked and if simplifying the process made it easier for students to attend college.

In a partnership with the tax preparer H&R Block, he and his colleagues supplied and implemented software that detected individuals eligible for financial aid and then mostly automated the completion of the FAFSA. The researchers conducted a large randomized-control trial to compare families who used the software and those who did not.

“When I did my FAFSA this last year for my daughters—and I think I know something about the FAFSA at this point—it was still about a 35-to-40-minute process,” Bettinger said. “In our experiment, we’re doing FAFSAs in eight minutes.” Plus, those who received the assistance were about 25%–30% more likely to go to college, he said.

Bettinger pointed to other barriers to access that are not so easy to simplify. For example, low-income people have huge misconceptions about college costs, but just telling them the actual costs does not make them more or less likely to go to college.

This conundrum raises key questions to consider, he said, like, “How do you help low-income individuals get the information they need? What’s the right content? How is that information actionable? And then, what do we do in terms of helping them put that information to use so that they can access existing programs?”

In turning to Jesse Rothstein of the University of California-Berkeley, Schanzenbach asked, “How far do we get by the simplification of aid? What else do we need to do?”

Rothstein described an experiment he did in which previously filed FAFSA information was automatically plugged into college website calculators to show California students’ net cost of attendance. The researchers then sent these students a letter laying out the amounts that each of the colleges they had expressed interest in would offer in aid—much earlier than the colleges themselves would have sent it.

Those letters changed where some students went to college, he noted, even moving some to more affordable institutions.

“Sending the students that table in the spring of their senior year is not the right policy,” he explained. “But it tells us that there’s a lot of room for growth—that efforts to make the process simpler will pay off.”

Beyond the experiment’s lesson of simplifying how students pay for college, Rothstein urged more.

Instead of today’s model of high tuition and high financial aid, he suggested that colleges should charge lower prices upfront and argued for increased funding and capacity at public colleges and universities. He acknowledged that lowering costs would mean providing subsidies for some people who don’t need them, but that the current system’s “ordeals create costs of their own.”

He also recommended eliminating loans as part of financial aid awards. In Rothstein’s research, he showed that students with loans were less likely to go into public service jobs, even if they could eventually repay them, than those who received grants.

“This is a cost that we don’t account for when we think about how to design these systems in our ideal system, but it really does affect the way students think,” he concluded.