Northwestern’s president and the U.S. under secretary of education informally discuss student debt, loan forgiveness, and other topics

Read more about the symposium and panel discussions. 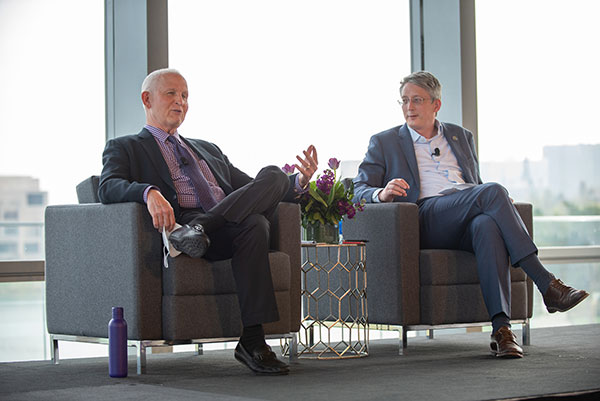 Two panels on higher education research and practice set up the May 10 “College Access and Success Symposium’s” highly anticipated conclusion, a “fireside chat” between two higher education leaders—Northwestern University Professor and President Morton Schapiro, the event’s honoree, with the U.S. Under Secretary of Education James Kvaal.

They covered ground on some of higher education’s top headlines—student debt and debt forgiveness, equity and inclusion, and undergraduate outcomes, among others. Kvaal also brought his deep understanding of the issues from a nonprofit perspective as former president of the Institute for College Access and Success, a research and policy organization.

Kvaal began by asking Schapiro to reflect on what student success is, based on his years leading the University.

Schapiro noted that the economic returns to college attendance have been strong over time. College attendance, especially at a high-quality institution, significantly increases the likelihood of moving from the bottom income quintile in the U.S. to the top quintile, he explained.

Schapiro emphasized that the benefits are more than economic and can increase a person’s capacity for citizenship, aesthetic appreciation, and caring.

Kvaal then turned to the issue of student debt: “Do you have recommendations about what we do either to retrospectively address all the $1.6 trillion that’s out there or what we need to do going forward to think about how we use loans differently?”

It is “bad economic policy to forgive debt” indiscriminately, Schapiro said. He cited how much of that debt is held by graduate students, such as those who earn an MBA or a medical degree and are most able to repay their loans across their careers. Nearly one-third (28%) of student loan debtors are in the top 20% of U.S. income distribution, he stated.

“Forgiving debt makes sense. But not without a means test,” Schapiro said, adding, “I would forgive up to $20,000 in student-loan debt only if it were from undergraduate degrees, and only for people with family income under $100,000.”

Kvaal pointed out that people with smaller loans—the average graduate has under $20,000 in loans—have the most trouble repaying them. They are often people who started at community colleges but did not finish or who went to a for-profit college.

“Going to college is perhaps riskier than we would like it to be,” Kvaal said. “We’d like to be able to say, if you want to move up into the middle class, you definitely should go to college. There are a lot of people who took that advice and are worse off as a result.”

Kvaal said the Education Department is working to get already available benefits, including loan discharges, to those eligible, including students cheated by for-profit colleges, students in public service, and disabled students.*

When Kvaal asked Schapiro about making college free, Schapiro pointed out that most students typically only pay around one-third of the full “sticker price” of tuition and room and board—and lowering the sticker price only benefits the richest.

Schapiro reflected on the Northwestern Academy for Chicago Public Schools, which he established in 2013 to help make the dream of college accessible to hundreds of families in underserved communities. The purpose of the academy “is to change people’s lives. And if you have an ability to do it, and you don’t do it, it’s a sin,” he said to audience applause.

Schapiro then returned to a “daunting” problem evoked in an earlier panel by Harvard University’s Bridget Long—the undermatching between academically qualified students and the colleges they attend. Attendance at the most selective college to which a student is admitted has the most sizable returns for Black men, then Black women, White women, and a small return for White men, he explained. But underserved students may not feel confident in their ability to succeed in such institutions.

“It’s on us to better figure out how to create an inclusive environment,” Schapiro said. “That’s the next frontier.”

‘We all care about transforming the world’: The Institute for Policy Research

Across the discussions of policy, practice, and research, Schapiro called out the work of the Institute for Policy Research.

Describing it as one of his “safe spaces” and a place where “we all care about transforming the world,” he spoke about his regular involvement as a fellow since he arrived at Northwestern 13 years ago and how it has enriched his scholarly and policy perspectives.

Schapiro argued that researchers have a duty to “repair the world” by putting great research into action by “great government servants” like Kvaal, Schapiro said, and they have a way to do it.

“That’s what IPR does,” he said. “It’s one of the greatest things I’ve ever been part of in my whole life.”

Morton Schapiro is president of Northwestern University, professor of economics, and an Institute for Policy Research fellow. James Kvaal is the U.S. under secretary of education.

*Editor’s note: On June 1, the U.S. Department of Education announced a program discharging $5.8 billion in remaining federal student loans for those who attended the for-profit Corinthian Colleges, Inc.