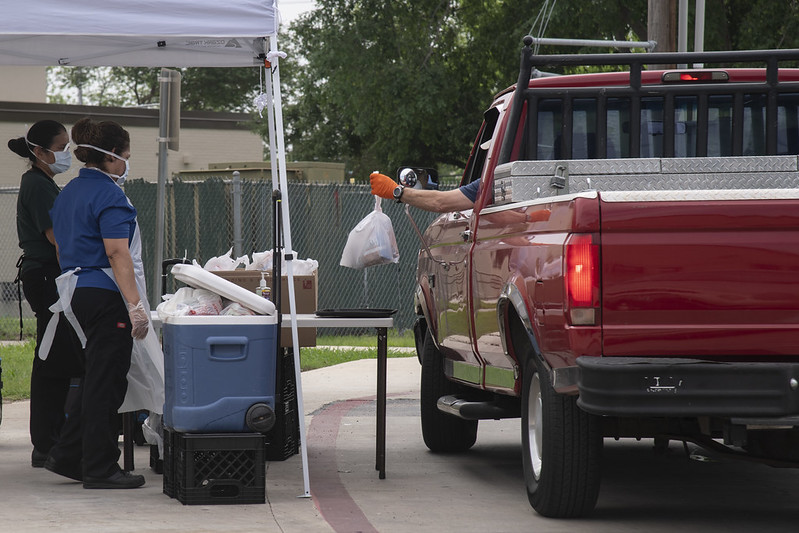 The COVID-19 health emergency has led to a sharp economic slowdown, with soaring unemployment and spikes in need as illustrated by news reports of miles-long lines at food pantries. In our latest report, we estimate current rates of food insecurity and the extent to which food insecurity rates have increased in national data and by state using the Census’s Household Pulse Survey (CHHPS). We find that food insecurity has doubled overall, and tripled among households with children. Food insecurity is elevated across all states, with some states experiencing extremely high rates and/or increases in food insecurity. Across the nation, 7% of households reported receiving free food during the prior week.

To compare measures collected during the COVID-19 health emergency to prior measures, we make several adjustments between the CHHPS and the Current Population Survey’s Food Security Supplement (CPS-FSS), which is the source of the U.S. Department of Agriculture’s annual reports. (See the report for a more complete discussion of our methodology.)

We also repeat the same exercise for households with children, who always have a higher rate of food insecurity than do households overall. We predict that the February 2020 likely level of food insecurity was 9.4%. During the COVID-19 health emergency, the rate of food insecurity for households with children more than tripled to 29.5%. Approximately half of this increase can be explained by the increase in the unemployment rate, and 65% could be explained if the unemployment rate were adjusted to include as unemployed workers reporting they were “not at work for other reasons.” Low-income families have been hit particularly hard during this period, between loss of subsidized school meals due to school closures, particularly elevated unemployment rates among women, and delays in some relief payments such as the slow rollout of the Pandemic Electronic Benefit Transfer (P-EBT) program that provides resources to replace missed school meals, as well as delayed unemployment insurance payments in many states.

Since the CHHPS data contains respondents from all 50 states, we can do the same exercise of translating food insufficiency into food insecurity by state using an analogous conditional means approach with the CPS-FSS. Overall, we find that the COVID-19 crisis has not impacted everywhere in the U.S. equally as demonstrated by disparate food insecurity rates by state. The complete table with data for all 50 states and the District of Columbia can be viewed here.

*See the complete report for all tables and figures.