Neighborhood Inequality: What Does the Research Tell Us?

“Are our neighborhoods places of vulnerability or places of protection?” Watkins-Hayes asked. People often live, love, and play in the same neighborhoods, she explained, and outbreaks of HIV/AIDS are not random events, but embedded within networks.

From left: Odette Yousef asks panelists Celeste Watkins-Hayes, Jonathan Guryan, and Andrew Papachristos about the impact of unequal neighborhoods on their residents.

How much impact does environment have on the outcomes of people living in unequal neighborhoods? WBEZ’s Odette Yousef opened the IPR@50 Conference asking this of IPR sociologists Celeste Watkins-Hayes and Andrew Papachristos and IPR economist Jonathan Guryan.

Where you live in Chicago becomes a major factor in your quality of life and influences the networks you are part of when thinking about inequality at the neighborhood level, Papachristos noted.

“Crime is both the cause and consequence of inequality,” Papachristos said, mentioning his work studying crime and networks. “Even as crime continues to go down in the city, the same neighborhoods still experience [disproportionate levels of] crime.”

Place and what we have access to also influence health outcomes and how they play out across neighborhoods, said Watkins-Hayes, who studies the impact of HIV/AIDS on women and how they cope with the disease in their daily lives.

“Are our neighborhoods places of vulnerability or places of protection?” Watkins-Hayes asked. People often live, love, and play in the same neighborhoods, she explained, and outbreaks of HIV/AIDS are not random events, but embedded within networks.

She challenged researchers to use neighborhood resources to address inequality, saying, “Our charge has to be to look for those success stories.”

Watkins-Hayes highlighted how Chicago worked to build an infrastructure to address HIV/AIDS during the height of the epidemic through community activism and engagement that later drove policy.

Are neighborhoods deterministic? Yousef asked. Does growing up in a lower-income neighborhood mean you are “fated” to be at higher risk for adverse outcomes?

“It’s not asking the question, ‘If neighborhoods matter,’ but ‘How they matter,’” Papachristos responded, pointing to how his research shows that only a very small percentage of residents in even the highest crime neighborhoods are involved in gun violence.

“But that’s not how we talk about high-crime communities,” he said, noting how everyone in those neighborhoods gets “painted with the same brush” and how such misperceptions can shape preventive measures.

Neighborhoods definitely matter, Guryan said, but that should not “let us off the hook” for working on policy interventions for teens, for example, who have grown up in neighborhoods with high levels of violent crime and historically low rates of public investment. He pointed to his research into an intensive math tutoring program in Chicago Public Schools that helps disadvantaged 14, 15, and 16 year olds to catch up to their grade levels in math.

Research can help improve neighborhoods by providing evidence for which interventions are working, Guryan continued. But he advised the audience to avoid the pessimism that accompanies failed scale-ups of programs. That is not the best way to think about a program’s potential impact, he said.

“There’s no shortage of design or innovation,” Guryan said. “The shortage is knowing which interventions work under which circumstances.” 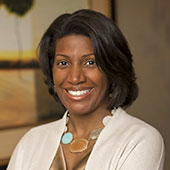