How and why do people still get print newspapers in an era dominated by digital access to the news? In New Media & Society, media scholar and IPR associate Pablo Boczkowski and his colleagues examine this question by taking a non-media-centric approach, or looking at the way consuming media and everyday life intertwine, and focus on how access, sociality, and ritualization play into reading print newspapers. The researchers study 488 semi-structured in-person interviews about the consumption of news, entertainment, and technology conducted by local interviewers in Argentina, Finland, Israel, Japan, and the United States between March 2016 and February 2019. While these countries have geographic, language, and cultural differences, they all are democracies and have high rates of Internet access. The researchers find that access to print newspapers ranged from free newspapers in public in Israel to interviewees who paid for multiple newspapers in Japan. In many of the countries, social relationships played a role in receiving a newspaper as family members passed on print newspapers to a spouse or child. Many interviewees ritualized reading the newspaper as part of their daily activities, such as always reading it during their commute. The researchers argue that taking a non-media centric approach to understand why people still read newspapers allows scholars to analyze the persistence of older media during an age dominated by new media and the role of print newspapers in everyday life. Boczkowski is the Hamad Bin Khalifa Al-Thani Professor in the Department of Communication Studies.

Incidental News Consumption on a Continuum

Incidental news consumption, or audiences’ encounters with news that they were not purposely seeking, has increased as more people use social media. In a study published in Journalism, Boczkowski and his colleagues look at the dynamics of incidental news consumption. The researchers conducted 200 semi-structured interviews between March 2016 and February 2019 in Argentina, Finland, Israel, Japan, and the United States. They asked respondents the last time they consumed news, along with open-ended questions about the respondents’ general media consumption patterns and the role of incidental news consumption. They find most respondents combine intentional and incidental news consumption. At the micro, or personal, level, respondents deliberately sought out news and incidentally consumed it, such as through social media or apps. At an intermediary, or meso, environmental level, participants heard about the news because a family member turned on the TV or radio or read posts connections shared on social media. At a macro, or society, level, respondents reported that news was more difficult to avoid in countries with higher levels of political or economic conflict, such as Argentina, Israel, and the U.S. There were similarities in news consumption across countries at the micro and meso levels, but at the macro level, national conflict increases the likelihood of incidental encounters with news. Further research is needed to understand the phenomenon, including the coexistence of mindless scrolling through social media and attention to news. 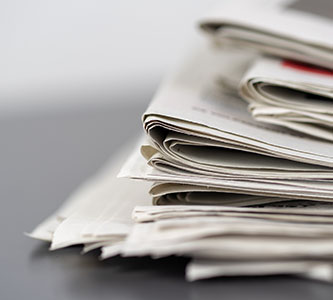 Local news organizations have experienced challenges over the last 15–20 years due to significant cuts and closures, leaving many communities without a local newspaper. Media scholar and IPR associate Stephanie Edgerly, IPR faculty adjunct Rachel Davis Mersey, and faculty emeritus of journalism at Northwestern Owen Youngman wrote an IPR working paper examining local news not as a ”one-size-fits-all” market, but as serving unique communities that may also have similarities to other parts of the country. Using data from a Pew Research survey in 2019 of over 35,000 adults, they show differences in the way various communities are exposed to local news and differences in the topics they care about most. They also examine the typology of communities created by the American Communities Project in 2018, showing the similarities of various communities, such as aging farmlands or big cites, around the United States due to a variety of demographic and lifestyle factors. The researchers find that by accounting for these variations and developing a typology of local news markets, more specific strategies for innovation can be recommended, tested, and shared among news organizations. As an example, they highlight the success the news startup BoiseDev had in Boise, Idaho—a growing tech community—by providing exclusive content and relying on advertisers and predict similar communities such as Saratoga, New York, could benefit from its approach. They conclude that local news providers may have more in common with distant but similar markets than nearby but different neighbors.

Look It Up: The Internet Can Redress Inaccuracies

Research shows that what people read influences their knowledge, and if they read inaccurate information, they can reproduce those same inaccuracies later, with those inaccuracies also influencing judgments and decisions. Experiments that demonstrate this process differ from real-life situations where people can check facts by going online. In Memory & Cognition, psychologist and IPR associate David Rapp and Amalia Donovan (PhD 2020) report on three experiments to test whether internet access improved the accuracy of people’s responses. In the first and second experiments, 216 participants read texts that included false information and were later asked questions related to that information. Half of the participants could look things up on the internet while answering. This group answered more questions correctly than did participants who were not permitted to look things up, as hypothesized. The third experiment allowed all participants to use the internet, with half receiving a warning that the texts included inaccuracies. People who received the warning provided more accurate answers overall than those who did not, but the warning did not lead to fewer reproduced inaccuracies that came from the readings. All three experiments showed that with respect to topics they knew little about, participants tended to reproduce inaccuracies more than when considering topics they were likely to know were wrong. Looking information up was helpful at ensuring successful understandings and performance.