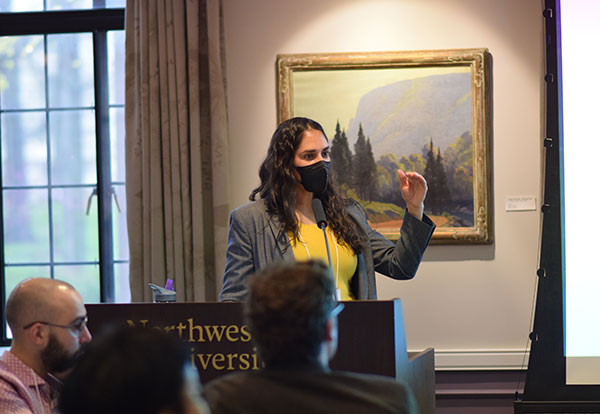 IPR political scientist Tabitha Bonilla presents on “The Role of Descriptive and Substantive Representation in Voter Decision-Making” at the CAB 2022 Conference.

“After two years of having virtual CAB meetings, the engagement and energy were palpable,” said IPR political scientist James Druckman, who organized CAB. “It was great to see CAB regulars and welcome some new participants, especially PhD students who had yet to experience in-person events.”

“At my first CAB, one of the professors said the conference has become a midwest institution, and I definitely think that's true,” said IPR graduate assistant Jeremy Levy, who co-organized CAB with Druckman. “It was really cool to see behind the scenes all the work that goes into getting everyone here, like the students and professors carpooling from nearby universities.”

What Are the Returns to Political Microtargeting?

Can targeting political ads to different groups be an effective way to persuade voters? Adam Berinsky of the Massachusetts Institute of Technology shared his preliminary research investigating these ads’ effectiveness.

According to Berinsky, digital political ad spending increased dramatically in the past decade in the U.S., and it was an important form of advertisement for Donald Trump and Joe Biden in the 2020 presidential election.

"One of the benefits of this kind of strategy is that you have the ability to show different types of ads to different types of people,” Berinsky said. “So you can maximize your appeal by essentially matching the message of your ad to a particular type of audience.”

Berinsky and his colleagues analyzed reactions to three sets of video advertisements and conducted several  experiments to estimate how well microtargeting performed. The video ads focused on policy opinions about universal basic income (UBI), the U.S. Citizenship Act, and the minimum wage.

The researchers determined the best-performing ad from multiple versions across demographics as a baseline. They then used machine-learning models to microtarget each ad to three different groups ranging in size from roughly 6,000–17,000 people using various appeals and policy arguments. Berinsky and his colleagues find that the microtargeted ads performed up to two times better than the best-performing ad.

In another experiment, they ran three separate experiments from February to March 2022 with the same ads to test the returns to microtargeting. The 5,000 participants were shown either a random ad, the best-performing ad, or a targeted ad. The results show that for the UBI and U.S. Citizen Act ads, the targeted ad performed better than the best-performing ad, but they did not see an advantage when they microtargeted the minimum wage ad.

Berinsky said there were some limitations to their study, including the small number of ads they were able to use.

“There is still a lot we don’t know about microtargeting, but our study is a step towards understanding this technology that seems to play an increasingly large role in American politics,” said Berinsky.

What Identity Means to Voters in Elections

IPR social policy expert Tabitha Bonilla discussed her research looking at how identity matters in political representation. Her work examines two types: descriptive representation when a candidate and a voter, for example, share the same racial and ethnic background—and substantive representation, when an individual advocates for policy interests of groups.

Bonilla, who recently published The Importance of Campaign Promises (Cambridge University Press, 2022), suggests that when candidates from underrepresented backgrounds run for office, their candidatures can signal that they share a commitment on important issues to voters with the same background. To test this hypothesis, she conducted a survey and Zoom interviews across 2020 and 2021 and examined data from the 2020 Collaborative Multiracial Post-Election Survey of roughly 20,000 adults.

The findings revealed that the identity of the candidates mattered to Black and Latinx voters, but issues were also important. The interviews, for example, highlighted that a shared identity can establish trust between a voter and a candidate, but it does not necessarily translate into a vote if a voter doesn’t agree with the candidate’s policy position. As an example, she cited a Black female respondent who called Kamala Harris “great,” but also questioned some of her earlier career choices regarding the criminal justice system.

“We have a lot of evidence here that suggests it’s not just about shared identity,” Bonilla said. “It’s about how shared identity translates into what elected representatives are doing on the issues.”

What happens when leaders elected in free and fair elections start to undermine democratic institutions and norms? Democracies begin to weaken, leaving a pathway for autocratic leaders to take control, according to the University of Chicago’s Susan Stokes.

She pointed to several recent examples in Latin America, Central Eastern Europe, and South Asia. The good news, however, is that some democracies have also managed to “exit” from democratic erosion, including Argentina, Moldova, and Colombia.

“That’s what inspires our research,” Stokes said. “We’re trying to help figure out the cracks and the ways in which [democratic erosion] might be stopped or paused.”

She and her colleagues are studying how to pinpoint the early signs of democratic erosion by comparing politicians’ speeches and analyzing the emotions, such as anger and outrage, but also optimism and enthusiasm, they elicit in their rhetoric. The sentiment is relevant, she said, because certain types of emotions tend to be good for politics.

To figure out which strategies politicians use, Stokes and her colleagues analyzed the speeches of Brazilian politicians Dilma Rousseff and Jair Bolsonaro and French politicians Emmanuel Macron and Marine Le Pen.

The researchers analyzed the speaker’s tone and coded the speeches’ sentiments, paragraph by paragraph. They also identified if speakers attacked out-groups, which their previous research reveals as an early sign of democratic erosion. Out-groups include political rivals, CEOs, lobbyists, ethnic minorities, journalists, and nongovernmental organizations, among others.

What’s the best way for governments to encourage citizens to get vaccinated? The University of Illinois at Urbana–Champaign’s Jake Bowers discussed two studies on government dissemination of public health information.

The first project tested if text messages could encourage unvaccinated adults in Rhode Island to get the COVID-19 vaccine.

Bowers and his colleagues sent eight messages to adults in Rhode Island who had not been vaccinated by May 2021. Each one highlighted a different topic, including vaccine safety, ease of access, protecting loved ones by getting vaccinated, and the number of those vaccinated. They randomly assigned each of the 142,428 adults to receive a text message in one of three waves, with the best-performing text messages in a wave reused in subsequent ones.

The researchers reveal that SMS messages, or texts, did not motivate recipients to get vaccinated.

“The results tell us that this SMS messaging technique, which is a very common way that governments can relay [information] to their citizens, has certain limits,” he said.

In a second experiment, Bowers and his colleagues used online YouGov surveys to determine which social groups and environments matter to respondents and what they may reveal about who intends to get vaccinated. The first study focused on respondents’ networks of family, friends, and neighbors, while the second asked about perceptions of partisan groups.

The results show perceptions of in-groups matter: Family members and Republican in-groups have the largest effect on vaccination intentions. For example, for a pair of Republicans sharing similar traits such as race and income, the one who sees more Republicans getting vaccinated is more likely to be vaccinated.