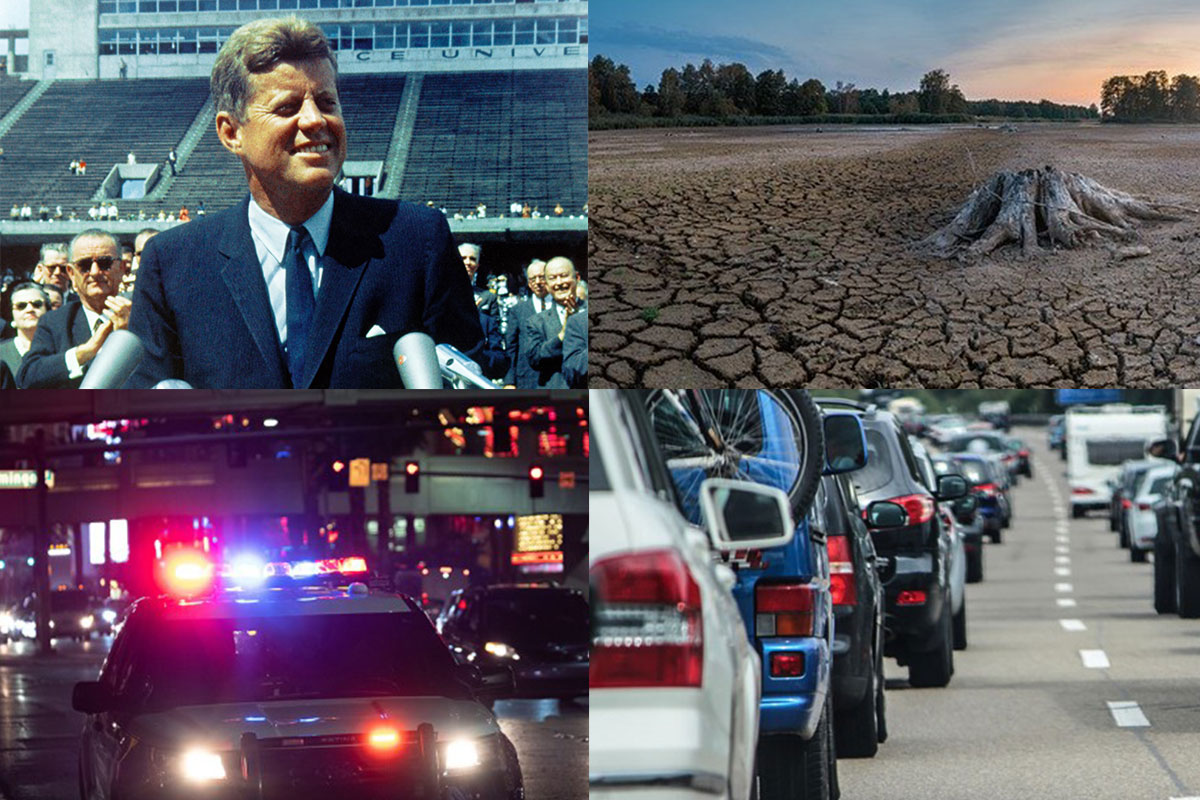 Assassination. Secret air pollution. Draught. Police shootings. Unexpected and beyond the control of individuals, these outside forces can “shock” people in ways beyond just a psychological toll. They can penetrate the cellular level in our bodies, ultimately affecting our health, the growth and development of our children, and more.

Such shocks also present research opportunities that lead to new insights and implications for policy. Coming from the different perspectives of sociology, economics, and psychology, IPR faculty follow how these exogenous, or outside, shocks enter and alter our lives.

The assassination of President John F. Kennedy (JFK) on November 22, 1963, in Dallas shocked the entire nation. What can research tell us about how such a shock affects health and development?

The association between stressful events during pregnancy and worrying birth outcomes, such as premature birth and low birthweight, has been widely studied. A team of IPR researchers explored whether—and in what ways—the shock of JFK’s assassination affected births to women pregnant that day.

One of them, IPR health psychologist Greg Miller, explained that their “access to a massive, historical, unique dataset,” tracking birth outcomes across the country in the 1950–60s enabled their study.

“It included many women who delivered multiple babies in that period, which gave us the opportunity to rigorously consider how major stressors, like the JFK assassination, affect their birth outcomes,” Miller said. “With a design like this we could use each woman as her own control—essentially comparing birth outcomes during the ‘exposed’ pregnancy, when JFK was killed—to those in a ‘non-exposed’ pregnancy at a different time.”

A single day’s shocking event that was so widely experienced allowed the researchers to pinpoint the effects of the assassination.

“This approach gets us to much stronger inferences about cause and effect,” Miller said.

The team, which included postdoctoral fellow Alexa Freedman, obstetrician and gynecologist Ann Borders, and others, analyzed the births of over 30,200 pregnant participants, about 5,800 of whom were pregnant at the assassination and determined that only those in their first trimester showed any measurable effects. The researchers found an increased risk of preterm birth for babies born to women in their first trimester when JKF was killed, as well as a slight reduction in birthweight for children born to those women.

When the researchers compared the birth outcomes of over 1,100 pairs of siblings born to women in the study who had a child prior to the assassination and then were pregnant when the assassination occurred, they saw similar effects.

“While stressors like the JFK assassination are often unavoidable and unpredictable, improving our understanding of how they impact pregnancy can inform clinical management, such as the potential need for additional mental health support,” the researchers wrote.

The 2009 Green Car of the Year Award went to Volkswagen (VW) for its Jetta TDI, a “clean diesel car” that claimed to combine diesel engines’ power and mileage with unprecedented low emissions of pollutants. The cars were marketed to consumers concerned about the environment.

However, it was later revealed that the cars were engineered to activate equipment during emissions testing that reduced emissions but then ceased during everyday street driving. In ordinary use, one of these “cheating” diesel cars could emit as much nitrogen oxide, a dangerous pollutant, as 150 gasoline cars.

“It really gives us this unique opportunity to study effects of pollution on health, in particular in more affluent areas and on populations that typically are not exposed to pollution,” Schwandt said. “Let’s look at moderate increases in pollution in affluent areas, areas where people have health insurance, they have good baseline health, [and] the air is clean in general.”

Schwandt and Alexander wanted to know what impacts the concealed emissions had on the health of newborns and young children. Birth records across the country allowed the researchers to track one well-known indicator of health outcomes. They tracked car registrations around the U.S. to pinpoint where the cheating diesel cars were sold, linking that data to detailed information on pregnancies and births in those counties. They also collected data from EPA monitoring stations and satellites to measure air pollution.

When they crunched all of this data, Schwandt and Alexander discovered that the exhaust emissions from the 612,892 cheating diesel cars sold between 2008 and 2015 were linked to lower birth weights in over 38,600 children and as many as 290 infant deaths.

Children across the socioeconomic spectrum were affected, but the effects were especially pronounced for children born to affluent, White mothers with a college degree, the research demonstrates.

Ironically, the families of this group of affluent mothers who had the greatest economic means to protect their family’s health from the effects of air pollution turned out to be the most at risk, Schwandt points out. Unaware that the cheating diesel cars were contributing more pollutants, not fewer as claimed, they continued to buy and drive the cheating cars around their neighborhoods.

These striking effects on birth and health of young children reveal that pollution from cars that run on fossil fuels constitute significant threats—for all of society, according to Schwandt. He says this calls for better informing the public about the dangers of car exhaust and for increasing incentives to switch to electric vehicles. Tightening emissions standards, another potential policy tool, needs to be combined with rigorous enforcement, however. Without better enforcement, more regulation may only lead to more undetected cheating.

“If we ramp up regulation, we have to do it in lockstep with enforcement,” Schwandt said. “Otherwise, it just increases the incentives to cheat.”

IPR sociologist Julia Behrman and Liliana Andriano of the University of Oxford studied young women in Malawi who experienced drought during the growing season, looking at when they first married or lived with a partner, their first births both inside and outside of marriage, and their decisions to exchange sex for goods and cash.

The researchers find that extreme weather phenomena are directly linked to women’s decision making about their lives—and suggest that climate extremes play a role in motivating women’s decisions to marry and have children earlier, or to a lesser degree, exchange sex for money.

Behrman and Andriano combined Malawi Demographic and Health Survey (DHS) data with the Standardised Precipitation Evapotranspiration Index, a cutting-edge measure of drought across the globe, in their analysis. They show that when women in Malawi experience drought as adolescents, they marry or start living with a partner and have children at even younger ages than the 18–19 years on average under better climate conditions.

“Young women who experience drought during an entire agricultural growing-season are associated with almost two times higher odds of union formation, compared to conditions of no drought,” Behrman explained.

Young women may have financial incentives to form unions or marry either due to direct exchange of goods for the marriage or because their family’s household will have fewer people to feed.

Behrman points to clear policy implications for her findings: In rural, farming communities, protection against the impact of drought on crop yields and prices is more important than ever.

“This could mean investing in an irrigation system, it could mean things like investing in weather insurance, that could help protect people, even if yields are affected,” Behrman said.

Exposure to violence in one’s neighborhood increases the risk of mental and physical health problems, as important studies by IPR faculty have shown, like this one on sleep and another on children’s health and inflammation.

So, might excessive use of force by police, a sudden and unpredictable shock, cause stress that contributes to these health disparities? IPR researchers analyzed women’s health records and formal complaints of excessive police force in the women’s Chicago neighborhoods to find out.

“We took several approaches to control for violent crime in the neighborhood and isolate the effect specific to police misconduct,” said Freedman, who was lead author on the article.

The researchers, who in addition to Freedman included Miller, Borders, and IPR sociologist Andrew Papachristos, calculated the frequency of excessive force complaints against Chicago police by neighborhood and then linked them to the electronic health records of nearly 68,000 pregnant patients and over 6,700 healthy adults without cardiovascular disease in those same neighborhoods.

“Our findings suggest that police misconduct may impact adverse pregnancy outcomes, which have important repercussions for long-term health and development,” Freedman noted.

Black women were 1.19 times as likely to have their babies prematurely when they lived in neighborhoods where complaints about excessive use of police force were more common and 1.42 times as likely to develop cardiovascular disease, the study shows.

“These studies are an important step forward for research on health inequity,” Miller said. “It’s long been clear that excessive police force in the neighborhood is a potent and persistent stressor for Black residents of Chicago. These studies extend knowledge by suggesting there may be consequences for women’s reproductive and cardiovascular health.”

Many of the researchers above are also part of Cells to Society (C2S): The Center on Social Disparities and Health, which brings a unique set of conceptual and methodological tools to bear on measuring and interpreting biology and how it matters in a social context.

“These studies are defining the cutting edge of research into the social determinants of health and health inequalities,” said IPR anthropologist Thomas McDade, who co-founded and directs C2S.  “By linking broader social and ecological contexts to behavior and physiology in quasi-experimental frameworks, these studies illuminate promising targets for policy intervention at multiple levels.”