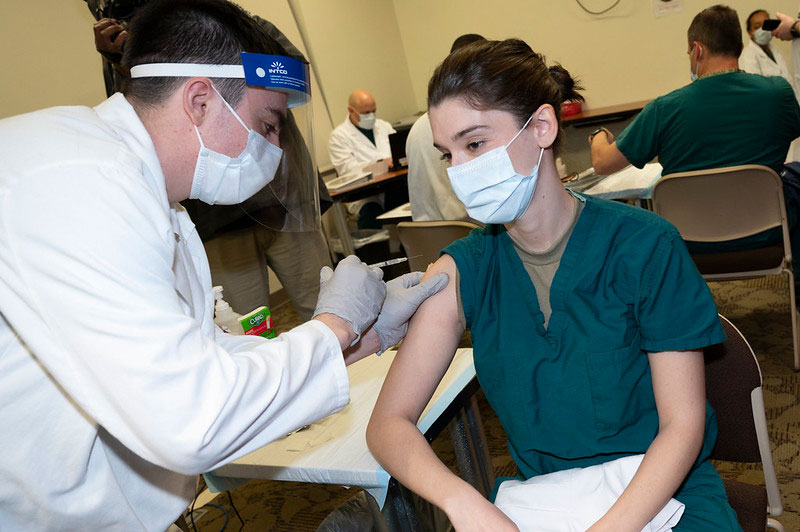 A doctor at Walter Reed National Military Medical Center, in Bethesda, MD., gets vaccinated on Dec. 14, 2020. Women working in healthcare reported more resistance getting a vaccine than men.

According to a new nationally representative survey conducted by Northwestern experts and others, a 50-year-old White male doctor in the Northeast, earning more than $200,000, is more than seven times likely to be vaccinated than a 45-year-old Black female nursing assistant in the South, earning less than $50,000.

While healthcare workers held similar attitudes to most Americans on their hesitancy in, and resistance to, getting vaccinated, they were more likely to be vaccinated overall (13%) than Americans generally (2%) since they are on the COVID frontlines as essential workers.

“While it is promising and sensible that healthcare workers are prioritized, the race and socioeconomic divide reflects a depressing reality of the inequities of American society,” said IPR political scientist James Druckman, who is one of the researchers investigating Americans’ attitudes about COVID-19.

Druckman and his colleagues from Northeastern, Rutgers, and Harvard Universities focused on a representative sample of 1,797 healthcare workers from a larger survey of 25,640 individuals across the U.S., conducted between Dec. 16, 2020, and Jan. 11, 2021.

The survey finds that education, income, gender, and race/ethnicity are strong predictors of vaccination rates, as well as of vaccine hesitancy and resistance among those at the frontlines of the fight against COVID-19.

Key findings from the survey include:

“It will be crucial that healthcare workers who recognize the importance of the vaccine communicate that as messages from the medical community are particularly effectual in reducing vaccine resistance,” Druckman said.

Of healthcare workers who had already received a vaccine, income and education levels predict some of the largest disparities besides gender. Healthcare workers with a high school education or less report a 7% vaccination rate, as compared with 18% of college graduates and 23% of those with a graduate degree. Individuals with a high school diploma or less were also most resistant to getting a vaccine: Nearly 1 in 3 (29%) said they did not want to get vaccinated, and 41% said they were hesitant to get one. By contrast, those with graduate degrees had the lowest levels of vaccine resistance (9%) and hesitancy (26%).