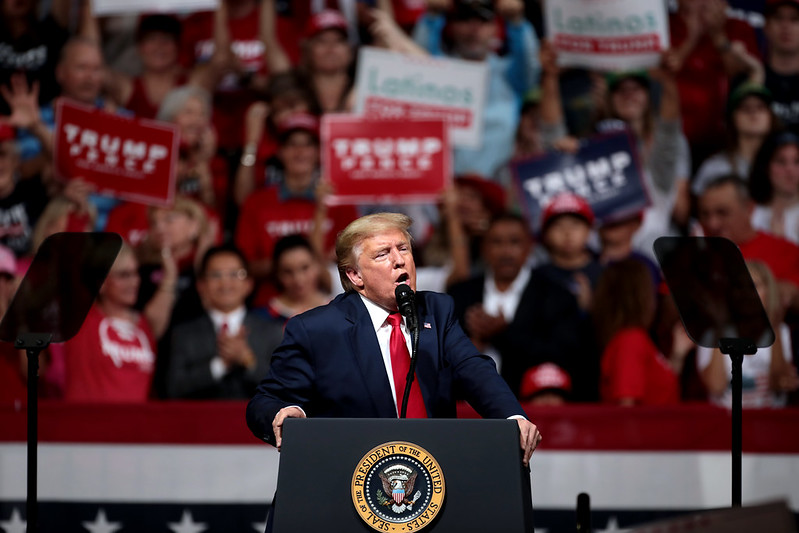 Every Republican president dating back to Dwight D. Eisenhower seemed to act out the same basic script: Assert control over the Republican Party. Invest in new organizational capacities. Reach out to new voters and try to persuade them to join the Republican coalition.

For these Republican presidents, “party building” and “majority building” were one and the same. Although most were unsuccessful in building new Republican majorities in Congress and in the electorate, all adopted a strikingly similar style of party leadership. That is, until Donald Trump was elected.

In a new working paper, forthcoming in The Forum, IPR political scientist Daniel Galvin reveals how President Trump differs from previous Republican presidents. Unlike his partisan predecessors, Trump has paired party domination and organizational investment with an almost exclusive focus on the strategy of “base mobilization.”

“Rather than fan out horizontally in search of new groups to join the party coalition,” Galvin writes, “Trump’s strategy drills down vertically to penetrate and deepen his base in the hopes of swelling the number of like-minded supporters who are active in electoral and party politics.”

Every president asserts control over his party, Galvin explains. In that sense, Trump’s efforts at party domination—stifling dissent, bullying opponents, demanding loyalty—might appear extreme, but they are primarily differences in degree, not kind. All Republican presidents, similarly, have made constructive use of their party organization.

“What is different about Trump, in contrast to his Republican predecessors,” Galvin said, “is that he has seemed almost completely uninterested in reaching out to new groups or building a new GOP majority for the long-term.”

He explains that Trump’s dominance of the Republican Party and his mobilization of his most hard-core supporters are complementary and mutually reinforcing.

Earlier Republican presidents found that their party-domination and majority-building efforts worked at cross-purposes: As they expanded their party coalition, it tended to undermine their ability to remake the party in their image and splinter the GOP. Although Trump has thus far managed to maintain a surprising degree of apparent unity in the GOP, his near-exclusive focus on base-building might pose a different kind of problem.

“It may well cost him re-election, since his base may not be big enough to win another narrow Electoral College majority,” Galvin explained.

In the study, he examines the handful of party-expansion efforts by the Trump campaign, including efforts to reach out to Black voters. These efforts have been undermined, Galvin says, by Trump’s opposition to the Black Lives Matter movement and his disparaging comments about the recent protests over police brutality.

“Recent developments have helped to further expose how counterfeit Trump’s limited ‘outreach’ to Black voters has been,” Galvin said. “Trump’s performative display seems less about winning over Black voters and more about improving his image among White suburban women voters and others who find his overt racism and xenophobia distasteful.”

While some may believe Trump’s energetic base is a unique phenomenon borne of his charismatic personality and deep polarization in the U.S., Galvin said his supporters are not going anywhere.

“Trump’s base is here to stay in the GOP—it is the GOP—and in certain respects, it selected for Trump,” he said.

Galvin points out that one troubling consequence of Trump’s pairing of party domination with base mobilization is that would-be Republican dissenters have either exited the party or kept quiet, leaving no one to challenge the president’s more questionable behaviors. He cites the impeachment proceedings as an example of how party leaders fell in line even when some of them believed the president’s behavior was harmful.

“His distinctive combination of party domination and base mobilization has augmented his power in ways that may continue to imperil our democracy,” Galvin argued.

Convincing his base to distrust institutions, such as the electoral system, could be especially dangerous to democracy, Galvin says, if uncertainty around the COVID-19 pandemic continues to impact the mechanics of voting. This could lead Trump and his party to pursue more anti-democratic efforts to demobilize or suppress Democratic voters such as purging voters from registration rolls, closing polling places, and continuing to question the validity of voting by mail.

“If he continues to insist that voting by mail is inherently rife with fraud, he may succeed in convincing his base, which still constitutes a substantial portion of the electorate, that the election was illegitimate—further undermining faith in our institutions and the mechanisms of our democracy,” Galvin explained.

Daniel Galvin is associate professor of political science and an IPR fellow.