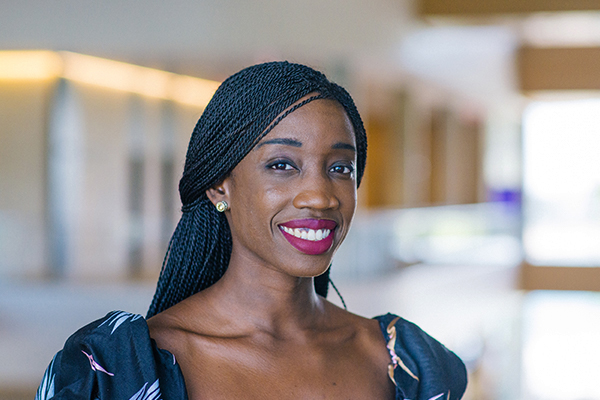 “My mother, like most of our parents, really emphasized the power and the value of school and education as a mechanism for trying to improve our life chances,” said IPR social policy expert Sally Nuamah.

Nuamah, whose parents immigrated to the United States from Ghana in the 1980s, would go on to take her mother’s advice and use education as an avenue for changing her life’s trajectory. She went from growing up in a low-income Chicago neighborhood in a household eventually led by her single mother after her parents’ divorce to earning a PhD from Northwestern University, landing on Forbes’ “30 under 30” in education, and becoming an advocate for girls’ education.

“What I didn't realize until I got into high school and then returning to the homeland of my parents was that education is a really important mechanism for young Black girls who are from poor backgrounds all over the world,” Nuamah said.

Given the schoolhouse’s profound impact on her own life, she became interested in studying education and the way it intersects with gender, race, and politics.

In her award-winning book How Girls Achieve (2019, Harvard University Press) Nuamah lays out a blueprint for “feminist” schools as safe spaces that model gender equity and teach girls to achieve. She examines schools in three countries and highlights how each one represents a part of the ideal feminist school—creating a safe environment in South Africa, promoting confidence in the United States, and becoming achievement oriented in Ghana. But she urges schools to focus on more than just academic achievement.

“If you only measure success in terms of them completing or graduating or even getting A’s, then that’s an incomplete picture of the purpose of educating girls,” Nuamah said.

She first traveled to Ghana in 2009, which led her to film a documentary HerStory and start a foundation, TWII, to help low-income Ghanaian girls attend college. So far, 31 have graduated with support from the organization.

While some question whether a researcher can also be an advocate, Nuamah argues many scholars of color go into research because they want to study and improve the lives of people in communities they grew up in.

“I don't think we really often have the privilege to just do research for research’s sake,” she said. “Fortunately, I have found communities that reward and appreciate that approach.”

The Punishment of Black Girls and Women

As Nuamah visited U.S. schools for her book, she noticed how much more Black girls were being punished. In a working paper, she finds that Black girls are viewed as being older, more dangerous, more knowledgeable about sex, and deserving of punishment compared to their White peers.

This study is part of a larger line of research in which Nuamah hopes to understand how Black girls’ early experiences with punishment shape their views of themselves and the government.

“There's nothing that Black girls are doing differently that's causing them to have these experiences with punishment at the hands of institutions that are meant to keep them safe,” Nuamah explained.

Black women represent one of the most active voter groups of any demographic, she notes. But without any resulting changes, they might not continue to engage politically.

“What you have is a group of people [who] may start to participate less and choose to direct their energies elsewhere,” Nuamah argued.

School closings may also shape the way communities participate in democracy. In a forthcoming book, Nuamah is looking at the 2013 school closings in Chicago and Philadelphia, which have some of the highest rates in the nation. Between 85% and 90% of them occurred in Black and Brown neighborhoods.

Nuamah explains that because schools are such essential institutions in minority neighborhoods, community members became more politically engaged after learning their schools would close. They ran for the school board, attended community meetings, and voted politicians out of office. Despite these efforts, however, their schools were still shut down.

She calls this experience of engaging and becoming disillusioned by the democratic process “collective participatory debt.” And if education is the most probable mechanism to improve one’s life, Nuamah questions what that means for these students.

“If we understand that premise to be true, what does it mean when those schools are closed, especially when they're public institutions?” Nuamah asked. “And what does that mean for [students’] ability to achieve all of what democracy promises?”

Sally Nuamah is assistant professor of human development and social policy and an IPR fellow.