Despite the faster test results, turnaround times are still too slow for broad contact tracing 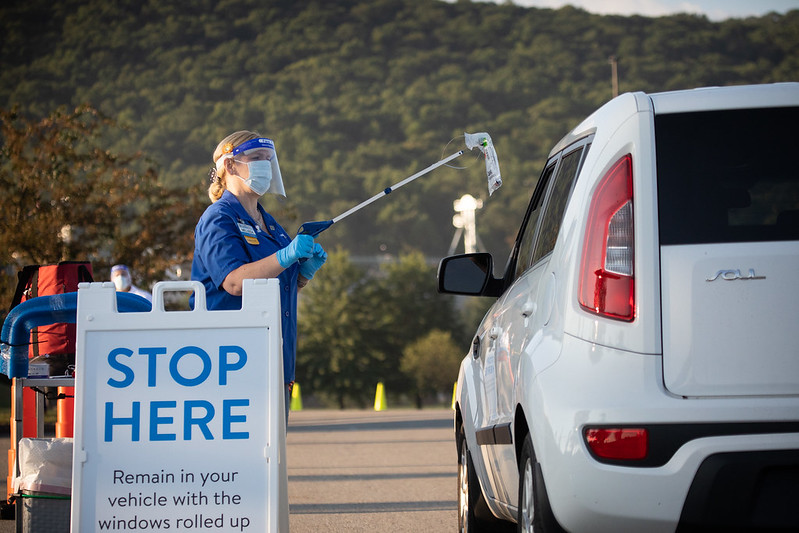 A woman hands a COVID-19 testing kit to a vehicle at a testing center at the Walmart Supercenter in Elizabethville, PA.

The average turnaround time for COVID-19 nasal swab tests decreased from an average of 4 days in April to 2.7 days in September, according to the latest survey results of an ongoing national survey of attitudes about COVID-19. Despite the quicker testing speeds, the results are still too slow in most cases to support successful contact tracing.

The researchers, who surveyed over 52,300 respondents in July, August, and September, looked at over 8,800 who received a COVID-19 nasal swab test. They found only 56% of those who tested positive for the coronavirus reported being contacted by someone to trace people they had been physically near in the last week. Of those who were notified about possible exposure, 37% said they were contacted by their state government, 28% by their local government, 25% by the hospital, and 8% by a non-profit organization.

“This suggests that contact tracing is not as ideal as it could be, and the lack of tracing is surely contributing to the spread,” said IPR political scientist James Druckman. Druckman is part of a university consortium between Northwestern, Harvard, Northeastern, and Rutgers running the State of the Nation: A 50-State COVID-19 Survey.

As with previous survey results, Druckman and his colleagues saw racial disparities in the turnaround times for test results. Across the three survey waves, Black and Hispanic Americans reported longer delays in test results than their White and Asian American peers. The average Black respondent waited 4.4 days to receive test results and the average Hispanic respondent waited 4.1 days. White and Asian American respondents waited an average of 3.5 and 3.6 days respectively for their results.

Many people faced barriers accessing tests, adding to the delay in getting back results. The researchers found that 35% of the respondents in August and September had to wait at least 3 days between the decision to get a test and receiving a test. This means people waited 6.2 days on average between the time they sought a test and received the test results.

Several logistical and financial barriers were factors in finding tests, with many respondents citing more than one obstacle. In September, 8% report that they wanted a COVID-19 test but were unable to get one. Of this group, 29% report that they were told by medical professionals that they did not need a test, 31% did not know how or where to get a test, and 29% said the wait times were too long. Additionally, 23% said the testing site was too far away, while 14% said the test was too expensive.

“The hope is these barriers to testing decline and wait times go down—crucial steps especially as we head into winter,” Druckman said.