May is National Mental Health Month, and IPR faculty are making vital progress in diagnosing, understanding, and addressing mental health conditions. Their interdisciplinary research has key practical and policy implications 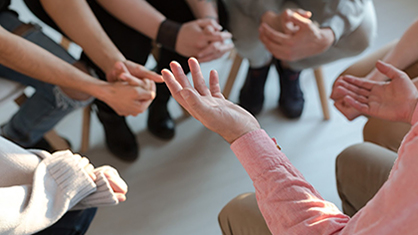 In a given year in the United States, 43.8 million people experience a mental health condition, according to the National Alliance on Mental Health. May is National Mental Health Month, and IPR faculty are making vital progress in diagnosing, understanding, and addressing mental health conditions. Their interdisciplinary research has key practical and policy implications.

In an ongoing study, Seligman is examining how healthcare providers treat Mexican Americans in mainstream mental healthcare settings and how culture and ethnicity matter to Mexican American patients. Seligman seeks to assess which factors most strongly influence quality of care outcomes, including patient satisfaction, adherence to treatment, and retention.

IPR psychologist Robin Nusslock has previously shown how psychiatric illnesses affect reward signaling in the brain. If researchers can understand that signaling, it could be possible to create a “brain stress test” to identify people at risk for mental health issues before they develop symptoms, just as cardiac stress tests identify people’s heart risks. Nusslock hopes that interventions—whether psychosocial, pharmacological, or neuromodulatory—could prevent people from “turning the corner” into psychiatric illness.

“If you could probe and say this person has a risk for developing bipolar disorder in five years or five months, you would make very different treatment decisions,” Nusslock explained.

Such a test could also aid in prevention. Nusslock offers an example of how a patient might go to a psychiatrist with symptoms of major depressive disorder, but has never had a manic episode—the other component of bipolar disorder. If the patient has a biological vulnerability to bipolar disorder, a psychiatrist prescribing a certain type of antidepressant can actually increase the likelihood of a manic episode.

If the patient has a biological vulnerability to bipolar disorder, a psychiatrist prescribing a certain type of antidepressant can actually increase the likelihood of a manic episode. Thus, generating brain stress tests for psychiatric disorders not only can facilitate timely diagnoses, but they can help determine optimal treatment plans for managing symptoms.

How Meaning in Life Affects Depression and Stress

Previous research has established that stress is a key factor in causing depression. For adolescents going through typical life transitions, stress is almost inevitable. IPR developmental psychobiologist Emma Adam, IPR health psychologist Edith Chen, and their colleagues investigate how meaning in life—or how “coherent, purposeful, and significant” a person perceives their life to be—affects the link between stress and depression symptoms in adolescents.

“Meaning in life may be a useful shield against the impact of stressors that adolescents would otherwise have difficulty avoiding,” the researchers wrote in the Journal of Adolescence.

Adam, Chen, and their colleagues suggest that meaning in life can act as a buffer for stress. Meaning can also help adolescents gain “cognitive control” over stressors they cannot change. Youth who used meaning in life to reframe a stressful situation had better outcomes for depression. Their research indicates that implementing known techniques to help adolescents seek and find meaning in their lives should be further explored and employed.

‘It Gets Better’ for LGBTQ Youth

The “It Gets Better” Project has illuminated the mental health of lesbian, gay, bisexual, transgender, and questioning youth. In light of the popular project, professor of medical social sciences and IPR associate Brian Mustanski and his co-authors explore if it “gets better” by examining LGBTQ distress and the factors that might influence distress over time.

In an accelerated longitudinal study looking at 231 racially/ethnically diverse LGBTQ adolescents aged 16–20 over three-and-a-half years, Mustanski and his colleagues find that psychological distress and experiences with victimization and bullying decreased across adolescence into early adulthood.

Many factors can contribute to mental illness, including both genetics and environmental factors like neglect and substance abuse. Law and finance professor and IPR associate Bernard Black has examined whether immigration status could also be a cause.

Black was part of a research team that assessed whether the eligibility of immigrant mothers for quasi-legal status under the 2012 Deferred Action for Childhood Arrivals (DACA) program, affects the mental health of their children. In an article in Science, they found that children whose mothers were eligible for DACA had fewer adjustment and anxiety disorders. This suggests, conversely, that having an undocumented immigrant mother who lacks DACA protection is a risk factor for mental health issues.

The policy implication is that legal status for immigrant mothers can promote the well-being of their children, who are American citizens. The research results suggest that granting permanent legal status could have “an equal, if not greater, effect on improving children’s health.”

Beyond Detention: Long-Term Outcomes of Delinquent Youth in Adulthood

Behavioral scientist and IPR associate Linda Teplin has been studying incarcerated populations since the 1980s. She has focused on psychiatric disorders and related health outcomes, and has studied women in jail, men in jail, and most recently, youth in detention. Since 1995, Teplin has led the Northwestern Juvenile Project, which studies a longitudinal study of 1,829 youth who were arrested and detained in Cook County, Illinois between 1995–98.

As they aged, Teplin and her research team has re-interviewed them, even if they were incarcerated. To date, her team has conducted over 18,000 face-to-face interviews during the last 20 years. Her work has informed issues such as psychiatric disorders, HIV/AIDS, recidivism, drug abuse, and gun violence. Findings have been cited in Surgeon General reports, amicus briefs to the Supreme Court, and by advocacy organizations around the US.

Teplin and her team are now studying the children of the original participants, called the Northwestern Juvenile Project: Next Generation. The study is funded by three federal grants. Two of them, from the Department of Justice and the National Institutes of Health, provide funds to explore intergenerational relationships in firearm violence. Teplin will investigate how exposure to firearms during the parent’s adolescence (including experiences of victimization and perpetration) affect firearm violence in their children. A third grant, from the National Institutes of Health provides funds to investigate intergenerational relationships in drug use and disorders.

Schizophrenia, a debilitating disorder characterized by hallucinations, intrusive thoughts, and illogical behaviors, affects about 1 percent of the population. That might sound like a small number, but to psychologist and IPR associate Vijay Mittal, it is not—and neither are its consequences.

“In a room of 100 people, one is likely to have schizophrenia and several more are related to someone with the disorder,” Mittal pointed out. “We don’t talk about it very often, but it is so detrimental to people’s lives.”

Mittal and his colleagues have identified early warning signs of schizophrenia that can be spotted in young people before they develop a full-blown psychosis. That kind of early identification opens the door to early treatment, which might one day prove to be effective in mitigating or even preventing future onset of psychotic disorders.

One of the risk factors Mittal has studied is unusual motor behavior—subtle physical patterns such as coordination problems and involuntary jerking movements. Young people who exhibit the unusual movements are several times more likely to develop psychotic behavior than those without them, Mittal discovered. He has also found that subtle handwriting abnormalities could predict schizophrenia risk, and is now working to assess the potential for tablet-based handwriting assessments for young people at high risk.

“Psychotic disorders are devastating for patients and their families, as they involve the onset of symptoms and significant impairment during late adolescence­­—a critical developmental period when youth are only just starting to make a transition into independence,” Mittal said. “These disorders are highly prevalent, and once diagnosed, involve a chronic course and bleak prognosis. However, an emerging research field suggests that we can now effectively identify those who are at imminently high-risk for psychosis, several years before onset.”

It is possible to diagnose major depression in a person’s blood, with a test designed by neuroscientist and IPR associate Eva Redei. The breakthrough approach provides the first objective, scientific diagnosis for depression.

The blood test measures the levels of nine RNA blood markers. RNA molecules are the messengers that interpret the DNA genetic code and carry out its instructions. In a study, the levels of these markers distinguished depressed patients from age, gender and race-matched controls without depression. Expression of some markers also changed in patients who went through cognitive behavior therapy and were no longer depressed. The test was also able to predict which individuals would benefit from therapy based on a distinct pattern of RNA blood markers, opening the door to personalized treatment plans for depressed patients.

“This clearly indicates that you can have a blood-based laboratory test for depression, providing a scientific diagnosis in the same way someone is diagnosed with high blood pressure or high cholesterol,” Redei said.

In an ongoing study, these RNA blood markers are tested in depressed pregnant women and future studies are aimed at determining if these markers can predict responsiveness to antidepressants.

“This test brings mental health diagnosis into the 21st century and offers the objectivity of personalized medicine to people suffering from depression for the first time," Redei said.