A pioneer of the nonprofit economy

In today’s atmosphere of “growing diversity and disagreements,” Weisbrod notes, “there is a growing role for nonprofits,” and they constitute an increasing share of the economy. 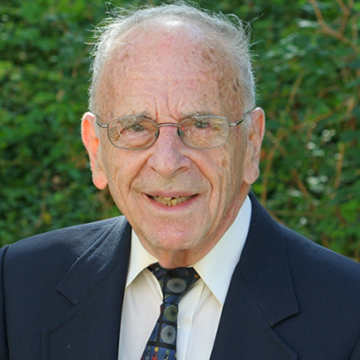 From his early studies in chemical engineering, IPR economist Burton Weisbrod found the “blanks” between elements in the periodic table intriguing. This idea of blanks stuck with him as he switched over to studying economics in college.

The economics he learned classified economic organizations into one of two categories, private enterprise or government. Weisbrod would eventually come to see this two-sector view as a “gross oversimplification,” and he filled in the space between them with a “hybrid” third sector—nonprofits.

“In the back of my mind was the periodic table of the elements,” Weisbrod said of his insight that led to over 40 years of pioneering research into the role of nonprofit organizations.

In 2015, Weisbrod presented a conference keynote address on the 40th anniversary of his initial paper, “Toward a Theory of the Voluntary Nonprofit Sector in a Three-Sector Economy,” that envisioned the economy with more than two sectors. This paper would lead to the publication of three books about the nonprofit sector between 1978 and 1998, analyzing economic behavior of for-profit, governmental, and nonprofit organizations in a mixed system in which they compete with and complement each other.

Each sector plays a key role in our economy, Weisbrod finds. Government provides some social necessities that the for-profit world does not efficiently supply, such as education and healthcare, or does not supply at all, such as poverty abatement.

To Weisbrod, government cannot correct all the “shortcomings” of the for-profit sector because we as taxpayers—the funders of government—do not all agree on what we want to do. This “demand diversity” leaves a gap potentially filled by the nonprofit sector, which relies on donors who give what it is worth to them to address the issues.

In today’s atmosphere of “growing diversity and disagreements,” Weisbrod notes, “there is a growing role for nonprofits,” and they constitute an increasing share of the economy.

After receiving his PhD in economics from Northwestern in 1958, Weisbrod taught at Carleton College and Washington University in St. Louis. He also served as a senior staff economist on the Council of Economic Advisors to Presidents John F. Kennedy and Lyndon B. Johnson in 1962–63. His many honors and appointments include election to the National Academy of Medicine, Fellow of the American Association for the Advancement of Science, Executive Committee of the American Economic Association, research fellowships from the Guggenheim Foundation and Ford Foundation, and visiting professorships at Princeton, Harvard, Yale, Brandeis, the University of California, San Diego, and the Autonomous University of Madrid. He founded and directed the Center for Health Economics and Law at the University of Wisconsin–Madison, where he was a faculty member in economics for 26 years.

His long-standing commitment to policy research brought him back to Northwestern in 1990 to lead the Institute for Policy Research, then known as the Center for Urban Affairs and Policy Research.

In 1991, his interest in healthcare policy led to publication of a Journal of Economic Literature article, examining the interplay of health insurance, technological change in healthcare—including prescription drugs—and the rising cost of healthcare. The article remains an important and widely cited economic work.

Most of Weisbrod’s career has seen him straddle three areas of economic and public policy research—healthcare, education, and nonprofits. He is always striving to integrate knowledge and ideas among them, to fill in the blanks. “There’s almost always a counterpart between healthcare and education,” he notes. He looks especially for what they have in common.

One of the “integrating ties” between healthcare, education, and many other nonprofit or mixed fields is the search to measure whether nonprofits are achieving their mission. Improvement in any economic system, Weisbrod points out, depends upon good measurement of performance.

It is easy to measure a for-profit enterprise’s performance. Its goal is to earn money for its shareholders. But the success of government and nonprofit organizations is much harder to determine.

Accountability to taxpayers and donors leads to calls for defining and measuring performance. Strong financial incentives and rewards, as well as harsh penalties, are presumably instruments for generating better performance. However, incomplete and biased measures of performance lead to unintended and counter-productive results.

Weisbrod is pulling together his “long-evolving ideas” about performance measurement as he writes the book that he sees as the “capstone” of his career. The Perils of Pay-for-Performance: Why Strong Rewards in Government and Nonprofits Don’t Work is under contract with Stanford University Press.

He is looking for the commonalities in the disparate corners of the governmental and nonprofit economy, including K–12 and higher education, hospitals, policing, museums, private charities, prisons, and the federal judiciary. He also examines the consequences of the growing number of inadequate, biased measures of performance—such as standardized tests under No Child Left Behind and rewards to police departments for cutting crime.

Once he completes the book, what will he do? After nearly 60 years as an economist, Weisbrod’s next chapter is probably best summed up by one of his favorite reflective questions, “What do I want to be when I grow up?”

Whatever he does, he plans on remaining curious, asking questions, and looking for the “integrating ties” that will help him continue to fill in economic blanks.

Burton Weisbrod is Cardiss Collins Professor of Economics and an IPR fellow.