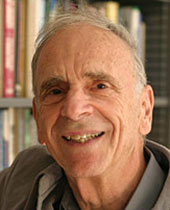 Economist Burton Weisbrod has written or edited 16 books and authored nearly 200 articles on the economics and public policy analysis of nonprofit organizations, education, health, the causes and consequences of research and technological change in health care, poverty, manpower, public interest law, the military draft, and benefit-cost evaluation. His most recent research examines the comparative economic behavior of for-profit, government, and private nonprofit organizations, and the causes and consequences of the growing commercialism of nonprofits. His latest book is Mission and Money: Understanding the University (Cambridge University Press, 2008), co-authored with Jeffrey Ballou and Evelyn Asch, which has been translated into Chinese and Turkish. This book continues his explorations of the role of nonprofit organizations in institutionally mixed industries, which he examined in The Nonprofit Economy (Harvard University Press, 1988) and in his edited volume, To Profit or Not to Profit: the Commercial Transformation of the Nonprofit Sector (Cambridge University Press, 1998). Weisbrod has published book chapters on K–12 education, healthcare, and higher education, and he is currently working on a chapter on policing.

Weisbrod served as a senior staff economist on the Council of Economic Advisors to presidents John F. Kennedy and Lyndon B. Johnson. He consults widely for governments, foundations, nonprofit organizations, and private firms in the United States and abroad.

From 1990 to 1995, Weisbrod served as director of Northwestern University's Institute for Policy Research (IPR), then known as the Center for Urban Affairs and Policy Research. At the University of Wisconsin-Madison, where he spent 26 years on the economics faculty before coming to Northwestern, he founded and directed the Center for Health Economics and Law and co-founded and directed the Training Program in Health and Mental Health Economics, supported by the National Institute of Mental Health. His elected positions include membership in the National Academy of Medicine, fellow of the American Association for the Advancement of Science, in addition to being elected to its Governing Council for the 1998-2000 term, Executive Committee of the American Economic Association, and president of the Midwest Economics Association.

Weisbrod was appointed by then-Secretary of Health and Human Services Donna Shalala to the National Advisory Research Resources Council of the National Institutes for Health for a four-year term from 1999 to 2003. From 2000 to 2005, Weisbrod was chair of the Social Science Research Council (SSRC) Committee overseeing its program on Philanthropy and the Nonprofit Sector; from 2002 to 2005 he was a member of the National Academy of Sciences Panel on the Measurement of Nonmarket Activity, and since 2005 he has been a member of the new IRS User Group Advisory Committee.

Other honors include being recipient of the Lifetime Distinguished Research Award from the Association for Research on Nonprofit Organizations and Voluntary Action (ARNOVA) in 1997, being named Phi Beta Kappa Visiting Scholar for the 1998-99 academic year, receiving, in 1993, the Carl Taube award from the American Public Health Association for his collaborative research on evaluation of community mental health programs, and giving the opening Plenary Lecture at the 2015 national meetings of ARNOVA.

Performance Measurement in the Public and Nonprofit Sectors. Weisbrod organized and continues to run an interdisciplinary series Seminars on Performance Measurement in the Public and Nonprofit Sectors, to focus research attention on broad issues of both the measurement of what is “good” performance outside the for-profit sector and the problems of developing reward structures that encourage the desired performance. Academic research presentations have covered such activities as health care, education, police, courts, and charitable fundraising, and these have been supplemented by presentations from officials of a foundation and a museum regarding their internal efforts to gauge performance. Weisbrod is working on a book on the relationships between the measurement of performance and the incentives to achieve better performance, highlighting the ways in which reward structures can distort behavior in inefficient ways.

Weisbrod’s principal current research is on a book on the relationships between the measurement of performance and the incentives to achieve better performance, highlighting the ways in which greater rewards can distort behavior in inefficient ways. The book, The Perils of Pay-for-Performance: Why Strong Rewards in Government and Nonprofits Don’t Work, under publication contract with the Stanford University Press, includes chapters on a wide range of industries, ranging from K-12 education and health care, which illustrate strong rewards for measured performance, to charities and museums, where rewards for measured performance are weak, to federal judges, for whom financial rewards for measured performance are essentially zero. A chapter on police shows how efforts to reward police departments for cutting “crime” are bringing increased strategic gaming of crime statistics that show “crime” decreasing even when it is simply being re-named. Another chapter, on higher education, highlights this sector as “the new frontier in the use of strong rewards,” as governmental payments to colleges are being made dependent on such “performance” measures as students’ “completion” of certificate programs, receipt of formal degrees, and full-time post-college employment.

Weisbrod is also pursuing a longstanding interest in mixed industries, such as health care and higher education, where for-profit firms, nonprofit organizations, and governmental agencies coexist, in a study of the U.S. hospital industry. The question, important for public policy, is how this coexistence is sustainable, in light of the different subsidies and constraints that operate  on the various organizational forms. Weisbrod’s model of organization behavior implies that for-profit firms will opt out of unprofitable activities that nonprofits and governmental organizations will provide. Evidence from the hospital industry is consistent with this prediction for each of three years over a 12-year period. Additional research is extending this work to higher education to test the prediction that for-profit colleges and universities provide a narrower range of programs than do nonprofits and governmental schools. This work, highlighting the implications of various models of organization behavior, can shed light on such matters as the effects of a merger of a for-profit and a nonprofit organization, or the conversion of one form into another. In both health care and higher education such mergers and conversions have occurred in significant numbers, with consequences that are poorly understood.

Weisbrod, Burton, Jeffrey Ballou, and Evelyn Asch. Mission and Money: Understanding the University (Cambridge University Press, 2008). Translated and published in Turkish in 2014 and in Mandarin Chinese in 2015.

Weisbrod, Burton A., ed. To Profit or Not to Profit: The Commercial Transformation of the Nonprofit Sector (Cambridge University Press, 1998). Editor and author or co-author of eight of the 15 chapters. Translated and published in Mandarin Chinese in 2013.

Weisbrod, B., with M. Sinitsyn. 2008. Behavior of nonprofit organizations in for-profit markets: The curious case of unprofitable revenue-raising activities. Journal of Institutional and Theoretical Economics 164(4): 727–50.

Weisbrod, B., with R. Lindrooth. 2007. Do religious nonprofit and for-profit organizations respond differently to financial incentives: The hospice industry. Journal of Health Economics 26(2): 342–57.

Weisbrod, B., with J. Goddeeris. 2006. Why not for-profit? Conversions and public policy. In Government and Nonprofit Organizations: The Challenges of Civil Society, revised edition, ed. E. Boris and C. E. Steuerle. Washington, D.C.: The Urban Institute.

Weisbrod, B. 2004. The pitfalls of profits: Why nonprofit organizations should get out of commercial ventures. Stanford Social Innovation Review 2(3): 40–47.

Weisbrod, B., with B. Erus. 2003. Objective functions and compensation structures in nonprofit and for-profit organizations: Evidence from the mixed hospital industry. In The Governance of Not-for-Profit Firms, ed. E. Glaeser, 117–42. Chicago: University of Chicago Press.

Weisbrod, B., with J. Ballou. 2003. Managerial rewards and the behavior of for-profit, governmental, and nonprofit organizations: Evidence from the hospital industry. Journal of Public Economics 87(9): 1895–1920.

Weisbrod, B. 2002. An agenda for quantitative evaluation of the nonprofit sector: Need, obstacles and approaches. In Measuring the Impact of the Nonprofit Sector on Society, ed. P. Flynn and V. A. Hodgkinson, 273–90. New York: Kluwer Academic/Plenum.

Weisbrod, B., with M. Roomkin. 1999. Managerial compensation and incentives in for-profit and nonprofit hospitals. The Journal of Law, Economics and Organization 15(3): 750–81.