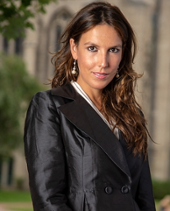 Research Areas:
Politics, Institutions and Public Policy
Economist Silvia Vannutelli studies the public sector economy with a global perspective. Her main interest is in public finance. Her research focuses on local governments and on the collection of revenues, as well as the allocation of government resources, social insurance, and the role of institutions and political economy issues in policy making.

Random Auditor Assignment and Municipal Fiscal Performance in Italy. In 2011, in order to strengthen oversight and sound municipal budgets, Italy switched from allowing mayors to appoint municipal auditors to a system of random assignment of auditors. Taking advantage of the rollout of the reform in cities over time, Vannutelli examines the effects and finds significant improvements in the governments’ net surpluses and debt repayments. These are achieved through revenue-based consolidation, not by cutting spending. Municipalities that were at more risk of corruption showed larger effects, as did those towns that were assigned more distant, or less connected, auditors. Vannutelli’s findings highlight the importance of independent auditing of government institutions.

Fisman, R., I. Kuziemko, and S. Vannutelli. 2021. Distributional preferences in larger groups: Keeping up with the Joneses and keeping track of the tails. Journal of the European Economic Association 19(2): 1407–38.