Boys and men are struggling, says Brookings’ Richard Reeves, but helping them can also help women and gender inequality 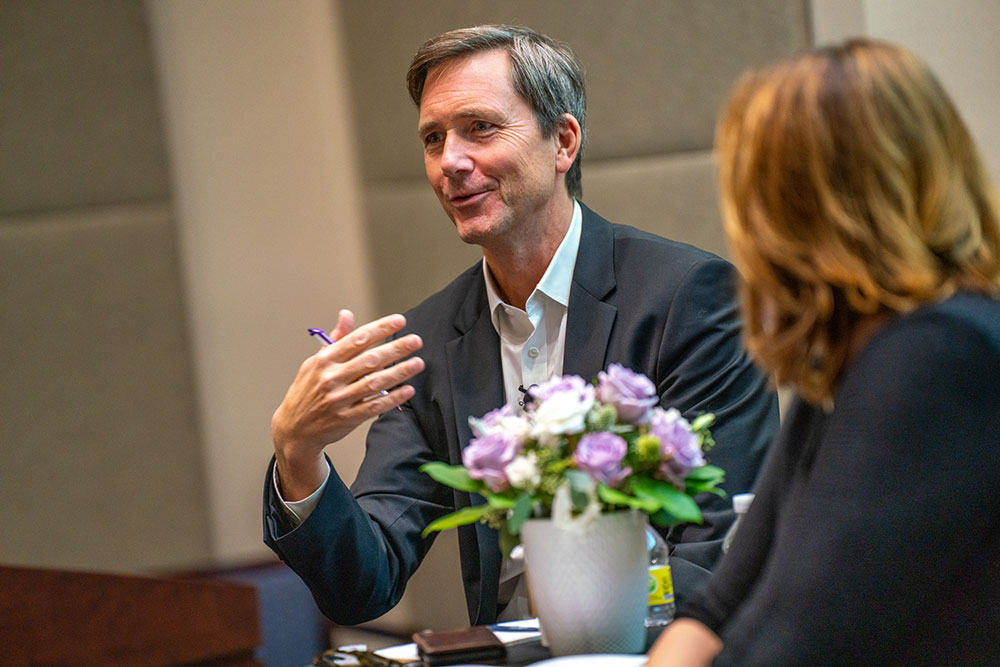 Men are falling behind women in school, in the workplace, and in other key measures of life outcomes, which has substantial implications for women’s outcomes, too, according to Brookings’ scholar and journalist Richard Reeves.

On November 3 at Northwestern, Reeves took part a wide-ranging conversation about the evidence in his latest book Of Boys and Men: Why the Modern Male Is Struggling, Why It Matters, and What to Do About It (2022, Brookings Institution Press) with IPR Director and economist Diane Whitmore Schanzenbach. He also outlined policy proposals for countering the decline, including a controversial one to redshirt, or hold back all boys one year in school.

For the full discussion, watch the video.

“It’s a little bit of a controversial topic,” Schanzenbach began before an audience of 60. “What led you to write the book? Both personally and why do you think it's important for society to have this conversation—and why now?”

“I’ve raised three boys who are now in their 20s,” Reeves replied.

He described how the book idea grew out of conversations with his children, his childhood experiences in the 1960s and 1970s during key struggles for gender equality, and his research on inequality and family issues over the past 25 years. But he was especially struck by the harsh problems men and boys faced—especially those who are working-class and Black.

“Things were worse than I thought,” he said.

Despite the overwhelming verdict from friends and colleagues that such an endeavor would be controversial, Reeves persisted. He offered that the book could help address the “vacuum” created by left’s failure to address masculinity and fatherhood and counterbalance the conversations that had mainly been taking place on the right. Doing so, he said would help create space for an honest political conversation instead of a “zero sum position.”

“It’s striking for me that there's a real reluctance on the left, as you said, even to discuss these issues,” he explained, “for fear that will somehow be seen as signaling less support for the continued efforts on behalf of women and girls. I think that’s a completely false choice.”

Diving into the Education Data

Schanzenbach then asked him to dive into some of the data behind his findings.

Reeves pointed to evidence showing that high school GPA was a great predictor of outcomes overall and when he examined findings from various studies, they showed that “girls were basically ahead in pretty much everything.”

These data led him to a conclusion that many might find “shocking,” “I think we have learned that the education system has been structured to favor girls rather than boys,” he said.

He pointed out that this “slight structural bias” also might explain the puzzle of why research has found many early-life interventions like Abecedarian for preschoolers and others seem to have important long-term effects for girls, but not for boys.

Switching to higher education, Schanzenbach described how 50 years ago men were more likely to go to college and women rarely did. But now men are less likely to go to and graduate from college than women, “What’s going on?”

Reeves described a 10 percentage-point drop in college enrollment out of high school and the 10 percentage-point gap for men’s on-time college graduation. He noted how this has changed since Title IX, the law that mandates equal treatment in institutions of higher education receiving federal funds. Prior to 1972 when it passed, men were 13 percentage points more likely to go to college. Since then, it has swung 15 percentage points in the other direction to women being more likely to attend.

This figure signals a massive change, Reeves said: “We have wider gender inequality today in U.S. higher education than we did when Title IX was passed. It’s just in the reverse direction.”

Which Boys Are Most Affected?

“You’re particularly concerned about Black boys and lower-income boys,” Schanzenbach asked. “What unique challenges do they face? Should we think about them being more challenged?”

Studies of implicit bias, criminal sentencing, and even cultural issues around toxic masculinity show how much Black men are uniquely stigmatized, Reeves said. He referred to data showing a wider gender gap between Black boys and girls than White ones.

In addition to race, class and family economics also contribute. He discussed how the gap between girls and boys widens the further down the socioeconomic ladder one goes, and how every measure of disadvantage shows boys doing worse—except for those in the middle or upper classes. Middle- and upper-class parents, he surmised, have the resources and the knowledge to help their boys overcome their disadvantages.

“Poverty really does amplify the agenda,” he said.

While Schanzenbach agreed with his assessment of the state of gender gaps in education, she brought up the “large and stubborn” male-female wage gap.

“Why haven’t we narrowed the female wage gap in a meaningful way if all of this is really as problematic as you say?” she countered.

Reeves said it has narrowed significantly: In 1979, he explained, only 13% of women earned more than the median man.

Diving into some of the factors behind it, he cited rising economic inequality driven by the extraordinary wage growth for the top-earning women, the impact of becoming a mother on earnings, and occupational segregation, where most jobs in careers like teaching, nursing, or psychology are held by women.

But the No. 1 evidence-based reason? Women earn disproportionately less than men after they have children, he said, which is why only a more equitable U.S. family policy will resolve the pay gap issue.

Reeves explained that American workers experience “work-friendly families” where after-school care and before-school breakfast clubs predominate instead of “family-friendly employment” policies. The latter would encompass policies like paid parental leave for mothers and fathers and would acknowledge the futility of pushing marriage as a solution when 40% of U.S. children are born outside of marriages. The current work-friendly policies also indicate, Reeves said, that we have hit a pay-equity ceiling.

“We’ve kind of reached the point like this far and no further in terms of what we can achieve on the gender pay gap until we restructure the gendered division of labor around childcare and our labor market institutions, which remain fantastically family unfriendly,” he said.

In terms of policy solutions, Reeves discussed two specific proposals. First, he offered that men should be encouraged to go into fields like in healthcare and teaching currently dominated by women workers. To this end, he suggested promoting boys-only scholarships—much like what is currently done to encourage girls to go into STEM fields—would be another important step forward. To those who find such a proposal discriminatory, he said it is “perfectly justified on some of the same grounds that we’ve had similar policies the other way around.”

Second is redshirting all boys in K–12 schools. Reeves said he developed it because research has shown girls’ prefrontal cortexes develop earlier than those of boys. This means they develop impulse control earlier, which in turn helps them to do better in school. So holding boys back one year would allow them to be the developmental equals of girls in their classes.

Schanzenbach, who has studied redshirting, said she and Reeves “have agreed to disagree” on this proposal. She asked him if its costs might outweigh the benefits. Implementing it, she continued, would mean boys would lose a year in the labor market, which could wind up costing them far more in terms of lifetime earnings.

Reeves agreed that more work is needed to fully understand it, but the status quo of doing nothing is also problematic.

“[T]hese problems won’t go away on their own. They’re going to fester if we don’t address them,” he said.

Richard V. Reeves is the John C. and Nancy D. Whitehead Chair, Senior Fellow in Economic Studies, and Director of the Future of the Middle-Class Initiative at the Brookings Institution. Diane Whitmore Schanzenbach is the Margaret Walker Alexander Professor and IPR Director at Northwestern University.

IPR Faculty Recognized for Teaching and Impact on Northwestern Students