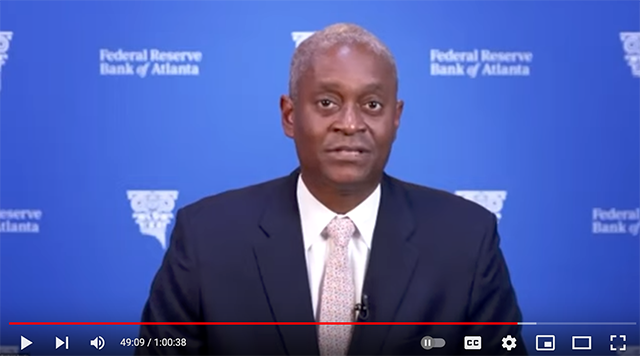 Raphael Bostic discusses inflation, the legacy of racism in the economy, and more at IPR's Distinguished Lecture.

Rising rents, distressing dinner tabs, climbing gas prices, and other signs of stubborn inflation are topics top of mind for U.S. voters less than a month away from midterm elections.

At an October 5 IPR Distinguished Lecture, Raphael Bostic, president and chief executive officer of the Federal Reserve Bank of Atlanta, outlined the reasons behind the nation’s surging inflation, what research and history show about combating it, and the Federal Reserve’s efforts to build an economy that works for everyone.

“In these circumstances, monetary policy assumes enormous importance because it is our bulwark against inflation,” he told 130-plus in attendance for the virtual lecture.

In welcoming him, IPR Director and economist Diane Whitmore Schanzenbach noted his work published in leading economic, public policy, and planning journals, and said, “He’s also one of the nation’s leading thinkers on the economic impact of racism in the United States.”

For the last seven months, the FOMC has been raising the federal funds rate to curb inflation. But what’s behind rising inflation? It comes down to two main drivers of inflation, according to Bostic.

First, he explained that people’s demand for items like furniture and electronics surged during the COVID-19 pandemic as more people stayed home, and thanks to improved savings due to lower spending and the federal response, Americans had more money in their accounts. However, with factory closures and sick workers, there was also a labor shortage and delays in production. As a result, the U.S. economy experienced a sharp drop in production—the largest since World War II.

“That imbalance in the labor market mirrors an imbalance between aggregate demand and supply for goods and services throughout the economy,” he said. “Our persistently elevated rate of inflation is a direct result of that imbalance.”

The second driver involved challenges abroad that have been impeding progress. Bostic pointed to Russia’s invasion of Ukraine, which led to a rise in gas prices, and a severe drought in China interrupted supply chains and had an impact on its exports.

“Business leaders tell me they are not worried so much about whether they can sell products in the short term,” he said. “Their bigger concerns involve supply-side issues like labor availability and the sustainability of demand months out.”

However, based on the Fed’s surveys, data, and conversations with business leaders, Bostic suggested those concerns might be due more to complex and “scrambled” economic signals than an unstable economy.

“Two significant reasons for that are that many households and businesses still are in a better financial position than they were before the pandemic, and the labor market remains robust,” he said.

By raising interest rates, Bostic pointed to how the Fed is seeking to balance economic activity and reach its long-term goal of low and stable inflation—or 2% annually as measured by its preferred indicator, the Personal Consumption Expenditures (PCE) price index. As it takes hold, the central bank expects consumer demand to fall.

Bostic sees signs that the Fed’s policies might be working. He described reports that low-and-moderate-income consumers have begun purchasing cheaper goods, which gives the supply chain time to recover from an increase in demand.

“The strength of labor markets will wane, and economic activity will weaken, which is fundamentally necessary to reduce inflation,” he said.

Is the Fed making progress on its goal of price stability? Bostic said that while some evidence exists that month-to-month price increases have slowed, Bostic called August’s inflation reports on price increases “broad and stubborn.”

“One of the main points I want to leave you with is that we must look to signals in addition to inflation readings to guide our policy,” Bostic said. “That’s because inflation will be among the last economic indicators to materially shift.”

Bostic cautioned those looking for a softening in interest rate hikes, saying the central bank will not lower rates quickly in 2023 even if economic activity slows and the inflation rate starts to drop. In his view, the central bank should not “overreact” if inflation does not fall back near its annual goal of 2% of PCE.

“Although recent data and other reports have brought glimmers of hope, the overarching message I’m drawing from them is that we are still decidedly in the inflationary woods, not out of them,” he said.

Bostic explained that research and history find monetary policy influences inflation slowly; for example, former Federal Reserve chair Ben Bernanke, who just won the 2022 Nobel Memorial  Prize in Economic Sciences for his research on banking and financial crises, and his co-authors show a two-year lag between deploying monetary policy and its effect on inflation.

He cited another example from Atlanta Fed economists Federico Mandelman and Brent Meyer suggesting that reversing decisions too quickly could worsen inflation.

In hindsight, Bostic said, the Fed likely reacted too quickly and aggressively to economic changes, creating a cycle of elevated inflation due to “unanchored” concerns. The lesson for today’s economy is that if consumers and producers assume that prices will continue to rise, inflation will take “deep root in the economy,” he emphasized, and be more painful to resolve.

“If economic conditions weaken appreciably—for example if unemployment rises uncomfortably—it will be important to resist the temptation to react by reversing our policy course prematurely,” he said.

Citing Federal Reserve Board Chair Jerome Powell, Bostic said Americans may experience short-term pain. Those who are lower-wage earners are particularly vulnerable to price increases, Bostic noted, because more of their income goes toward necessities, which have experienced higher-than-average inflation over time. Failing to restore price stability, however, will only lead to more suffering, as shown in the Great Inflation.

Bostic projected that interest rates could reach between 4% and 4.5% by the end of the year. And if they do, he then plans to pause and assess how FOMC policies are “flowing through the economy.”

“I am going to remain purposeful and resolute,” he concluded, adding that “we are going to be unwavering in the pursuit to bring underlying inflation back toward our 2% objective.”

Building an Economy for Everyone

Following the lecture, Bostic took questions from the audience.

Many families, Bostic said, have been penalized for past policy decisions that influenced previous generations and their capacity to build wealth.

“[W]ealth is in so many ways the barrier—you need to have a down payment to buy a house,” he said, noting that people cannot build wealth if they do not have enough income.

He mentioned the Fed has taken steps to bridge gaps between itself and communities that have been economically disadvantaged. One effort is creating information networks and partnerships with communities and institutions to help improve economic mobility. The Fed also works with schools to inform students about high-paying jobs and in-demand skills.

“[Some students] have really rejected or given up on a number of fields where I think they could make positive contributions,” he said.

In answering a question about what the Fed has done to build a pipeline with the community and educate people about monetary and fiscal policy, Bostic encouraged people to tap into the Fed’s network of experts for small business development, affordable housing, fiscal capacity, and infrastructure investment.

“We’ve got to stabilize the income environment, infrastructure, and foundation so that people are earning enough so that they can save,” he said. “That savings can turn into wealth, so [people] can fully participate and contribute to the American experience.”

The lecture was cosponsored with the Public Action and the Social Compact (PACT) program in the Kellogg School of Management.

Raphael Bostic is president and chief executive officer of the Federal Reserve Bank of Atlanta.  Diane Whitmore Schanzenbach is the Margaret Walker Alexander Professor and IPR director and fellow.

IPR Distinguished Public Policy Lectures are given by prominent individuals who straddle the worlds of policymaking and academia and can speak to the use of research in policymaking and other issues. Past lecturers have included Arthur Brooks, Robert Reich, Cecilia Rouse, and Donna Shalala. IPR and Northwestern will welcome Harvard economist Raj Chetty on February 20, 2023, as its next distinguished lecturer.