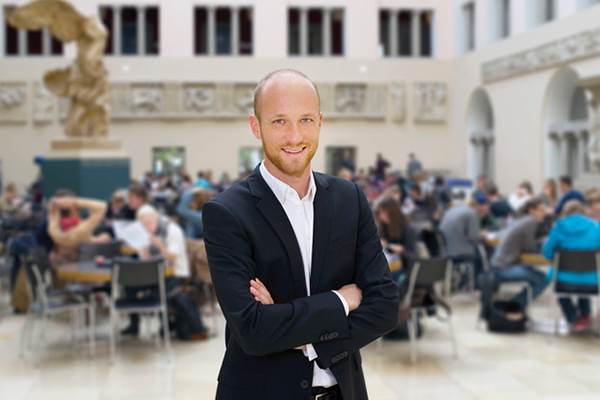 Growing up in Germany, IPR economist Hannes Schwandt became curious about what underlies happiness—peoples’ health, their children, their well-being. He was also intrigued by the study of economics and its role in making people better off.

He was able to study both as a postdoctoral fellow at Princeton, and now as an assistant professor at Northwestern, Schwandt likes to think about people’s wellbeing in the broadest way possible.

“What ultimately matters is not the dollars you make but how satisfied you are with your life overall,” he explained. “Health and family are probably on top of the list of the things you need for a happy life and ... after that comes a fulfilling job and material prosperity. Economic growth does not always go hand in hand with those goals. In fact, for disadvantaged groups economic growth might not even result in material gain.”

In one line of his research, Schwandt examines the impact that big external events or trends—known as “shocks” in economics—have on people’s lives. Traditionally, economists have concentrated on how economic fluctuations, such as recessions like the one we are in now, affect education and jobs, the elements that create a person’s experience and skills, or human capital.

Schwandt approaches the study of human capital in a different way.

“I think jobs are often a means to an end, and the end is more health and family formation, those things that really matter for people,” he said. His interest extends to the persistent effects of recessions on fertility and health: Were some parts of society more vulnerable to them than others?

In research published in the Proceedings of the National Academy of Sciences with Princeton economist Janet Currie, Schwandt examined the effects of high unemployment on women. The Great Recession of 2008–09, Schwandt and Currie wrote, had “a profound effect” on women aged 20–24: They estimate that 151,000 of them will remain childless at age 40, a nearly 9% increase in the rate of childlessness.

In the American Economic Journal, Schwandt investigated what happened to elderly people’s physical and mental health as the stock market peaked and plummeted between 1998 and 2011. He uncovered that the swings led to very significant effects on retirees’ health—and even survival. Drops in the value of their stock market holdings of 10% over a two-year period led to increases in high blood pressure and heart disease. For every 100 retirees, according to his estimates, one additional person will die, and 2.5 will develop an additional health problem.

He has also demonstrated how economic downturns can lower wellbeing. In the Journal of Labor Economics, he and his colleague Till von Wachter of the University of California, Los Angeles found the cohorts who came of age amid downturns such as those of the early 1980s and the Great Recession suffered lower earnings and net worth, as might be expected, but also were worse off in terms of health and their family. The “unlucky” cohorts were less likely to be married and more likely to be divorced. They also had increased rates of mortality as early as their 30s, driven in part by diseases, including heart disease, lung cancer, and the so-called “diseases of despair,” such as liver disease and drug abuse.

While it is well-known that recessions can have devastating effects on human capital, Schwandt wants to dig deeper.

“I ask myself what the societal and environmental shocks that really matter for us are,” he said.

Recently, Schwandt has shifted to consider the consequences of pervasive shocks such as pollution, violence, and illness. For example, he and  Diane Alexander of the Chicago Federal Reserve studied the additional pollution added by the “clean diesel” cars sold in the U.S. between 2008 and 2015 that had been found cheating on emissions tests. These exhaust emissions were linked to lower birth weights in over 38,000 children and an increase in acute asthma. The emissions especially affected children from high socioeconomic backgrounds, whose families were more likely to buy cars marketed to environmentally conscious consumers.

Schwandt is also investigating the effects of infectious disease spread, especially among families with young children, who bring home illnesses from daycare or school, thus acting as “disease hubs.”

It's more than just a nuisance; it’s a cause of suffering, he said.

Schwandt is especially interested in understanding what drives the spread of common infectious disease, such as seasonal flu, its costs, and its impact on peoples’ lives to formulate policy.

“For example, if my research identifies certain hotspots in society that are particularly relevant for disease spread, we can try to shut those down,” he noted.

Amidst our current, highly unusual coronavirus pandemic, Schwandt’s research could be helpful, especially as he looks to start his own family.

“I hope my research would contribute to the way that we understand or learn about these more regular, more frequent infectious diseases and how they spread [and] that this will also help us to learn and prepare for those more pandemic cases,” he said.

Hannes Schwandt is an assistant professor of human development and social policy and an IPR fellow.