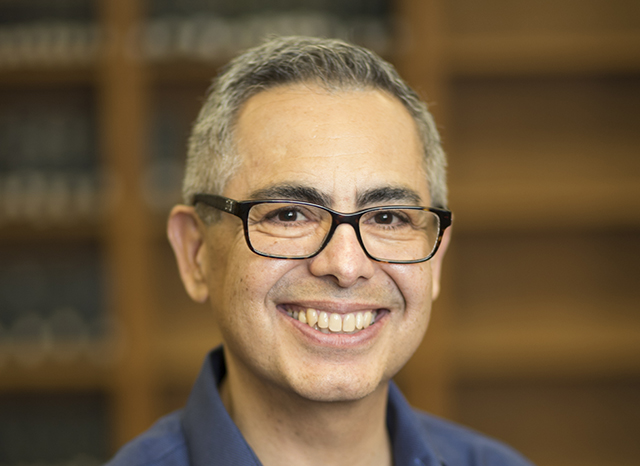 Sociologist and IPR associate Héctor Carrillo’s newest project was inspired by a question younger relatives ask their elders every day, “What do you know about our family?” Not everyone’s older relative, however, happens to be an award-winning sociologist.

The question set him down a path to examine through a sociological lens how people conduct amateur genealogy.  He became especially interested in the documents and records that make archival genealogical work possible and the relationships amateur genealogists establish with them as they reconstruct their family histories.

“As I started doing my own work as an amateur genealogist, I began to realize how interesting it was, this process of people wanting to find out where they came from,” Carrillo said.

And the research community, so far, has agreed. For his efforts, Carrillo was named one of 2020’s Guggenheim Fellows. His research focuses on how individual actions and identities interact with society, as part of his work on projects such as the Sexualities Project at Northwestern (SPAN). The new undertaking is a logical outgrowth of the themes that have fascinated him throughout his career.

“My previous work has been on issues related to sexuality, health, and immigration, and so this is a departure from that,” Carrillo said. “But all of those issues play out in complicated ways within the genealogical endeavor.”

Carrillo said that from a sociological standpoint, amateur genealogy can tell two key stories that frequently intertwine: one of mobility, and one of sexuality, usually expressed through marriage records.

“You find people who cross oceans, who migrate and leave very different places behind to start a whole new life in a new location, and then in terms of sexuality, around family life, you see not only relationships but gaps in the knowledge about things that were less documented [at the time], including non-normative sexualities,” Carrillo said.

Those are subjects Carrillo has researched extensively on their own over the course of his career, including another high-profile recent project for which the sociologist was lauded this winter.

In that book, Carrillo describes the experiences of gay men who left their home country to pursue greater sexual freedom and expression in the United States.

“My desire [in writing the book] was to link the subfields of sexuality, migration, and health in what I hoped was an interesting and novel way,” Carrillo said. “I came to realize in writing that there was room for a way of thinking about limitations that have existed in, for instance, the sociology of immigration, where sexualities are rarely considered as an important issue.”

To Carrillo, the response to the book suggests an appetite for further multidisciplinary research like that inherent to his new research project, as well as his work with SPAN.

“The fact that the ASA selected it suggests to me that it captured the imagination of people in the sociological fields enough to think that there was something of value there in that sort of crossover analysis.”

A multidisciplinary approach to sexuality studies

In that vein, with his work at SPAN, which he co-founded with sociologist and IPR associate Steven Epstein in 2010, Carrillo has sought to create a space to study human sexuality in a multidisciplinary fashion not dissimilar to IPR’s overall mission.

“Steve and I, at the time, realized that Northwestern was in a very unique position where there was a lot of work being done in sexuality studies, but there wasn't a sense of an umbrella, or a community around them,” Carrillo said. “We knew the best way to do it is by providing support and funding for people to come together in an interdisciplinary fashion, and that’s how the project started.”

SPAN is currently co-directed by Carrillo and linguistics professor Gregory Ward. Over the first decade of its existence, SPAN has funded sexualities research by graduate students and faculty in 39 departments and programs across Northwestern.

“It's been a very good way to help create conversations across disciplines around the central topic of sexuality,” Carrillo said.

According to Carrillo, the expanded amount of research around sexualities in recent decades, especially with regard to LGBT issues, has the potential to open not just new avenues within his department, but across academia.

“There's been a certain normalization of LGBT studies over the past few decades that has made it possible to think that the lives of LGBT people, and sexual and gender minorities more generally, are not only worth learning about but also are a good lens through which we can analyze all kinds of things — social, political, economic, biological, psychological, and health related.”

Héctor Carrillo is Professor of Sociology and Gender & Sexuality Studies, co-director of the Sexualities Project at Northwestern (SPAN), and an IPR Associate.

Support for School Vaccination Requirements Edges Up, But Some Resistance Remains