Easing the Impact of COVID-19 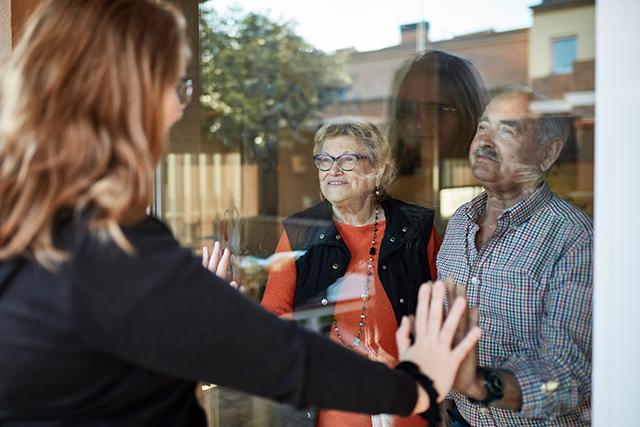 As the COVID-19 pandemic continues to spread, with the U.S. now leading the world in reported cases, an international team of leading social scientists came together to analyze what the social and behavioral sciences can tell us about current responses to the pandemic.

Though medical and biological expertise is key to understanding the virus, how it spreads, and rapidly developing effective treatments and vaccines, social and behavioral research also has a critical role to play.

“Our paper provides some insights from the past century of work on related issues in the social and behavioural sciences that may help public health officials mitigate the impact of the current pandemic,” the authors wrote in the study, published in Nature Human Behaviour on April 30.

“The paper makes clear that the social sciences provide a body of knowledge that helps understand responses to COVID-19 and provides concrete suggestions about how best to respond,” Druckman said.

The researchers reviewed more than a century of relevant research from a wide variety of topics, synthesizing more than 250 prominent peer-reviewed studies, chapters, and books to produce their analysis. They offer readily applicable insights for policymakers, leaders, and the public in six key areas:

While urgent action is called for to mitigate the devastating effects of COVID-19, the authors point out that the lessons drawn here will serve not only for this pandemic but also for future threats to public health. They also identified additional areas for further research and note that the research is still ongoing, so policy findings should be interpreted with caution.

“This interdisciplinary review points to several ways in which research can be immediately applied to optimize response to this pandemic, but also points to several important gaps that researchers should move quickly to fill in the coming weeks and months,” Willer said.

Below are brief highlights of each key area.

Schools, concerts, and elections are shut down or postponed. Healthcare systems are overwhelmed. Millions work from home or are out of jobs. Billions shelter in place. The world is facing massive and unprecedented social, economic, and cultural shifts due to the virus’ rapid spread. How can humans, who are inherently social beings, carry on—especially when strategies of social distancing and self-isolation are separating us from our communities and loved ones, the very things that allow us to remain resilient in difficult times? The research offers news, both good and bad, on this front. 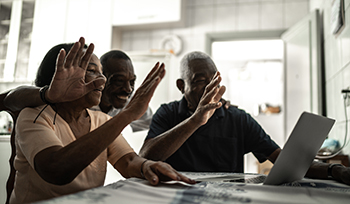 The researchers point to how loneliness can worsen stress and mental and physical health. But here, they offer, technology can help. To highlight the connective power of the virtual world, they suggest using the term “physical distancing,” instead of social distancing. Tools like Facetime and Zoom can keep families and friends connected, and the researchers also suggest showing those less familiar with such technology how to use them. Older adults, in particular, are at a higher risk for not only the physical symptoms of COVID-19, but the potentially negative psychological effects of social distancing.

“Special attention should be placed on helping older adults—who might be less familiar with these technologies—to learn and acclimate to the potential richness of digital connections. COVID-19 will leave many of us confused, anxious, and lonely,” Van Bavel and Willer wrote.

Additionally, extended periods of isolation and quarantine might mean putting some at greater risk. Isolation can raise levels of stress, confusion, and anger that can become “explosive” for families in close quarters. For instance, it can increase cases of abuse and domestic violence or lead to a surge in divorces as one study following a hurricane showed. On the flip side, the same study also revealed an increase in births and marriages. Research, which Finkel has contributed to, underscores how important it is for people to “calibrate” their expectations to the current circumstances of their relationship, instead of expecting love and family relationships to be as they were before.

The article also stresses how a 20-year body of research on coping and stress can determine how well our bodies deal with responses to COVID-19. It reveals that having an adaptive mindset can lead to positive emotions, reduce symptoms of ill health, and improve physical functioning.

Infectious diseases have been responsible for a large death toll throughout human history, such as the bubonic plague that killed 25% of Europe’s population in the 1300s, so it is critical to understand how people navigate threats during a pandemic.

Fear is the most common response to a pandemic, and targeting it can be useful in some situations but not others. Also, people often hold an “optimism bias,” the belief that the disease will impact others, but not them. This can lead them to ignore public health warnings. The authors suggest that communication strategies should strike a balance between breaking through optimism bias without causing excess fear and anxiety.

The researchers note that disease and the perceived threat of out-groups can increase discrimination, citing reports of whites physically attacking ethnic Asians. Pandemics, however, also offer opportunities to reduce prejudice when groups coordinate efforts to stop the spread of the disease. For example, 21 countries donated medical supplies to China in February, and China has since reciprocated.

In times of peril, popular culture leads us to believe that people panic and act selfishly, especially when in crowds. But researchers have largely abandoned this idea. While some do act out of self preservation, others are more inclined to cooperate during emergencies and disasters—and even engage in remarkable acts of altruism. The researchers point out the media’s focus on “panic” can perpetuate it. Such news stories can move people from collective purpose to individualism, turning “sensible preparations into dysfunctional stockpiling.”

Communicating sound scientific information to the public during a pandemic is essential, but conspiracy theories, misinformation, and fake news have all risen during the COVID-19 outbreak. Conspiracy theories that the U.S. government had used the coronavirus as a bioweapon against China, and vice versa, started spreading after news of the virus first broke. The researchers note that some evidence shows that educating people with factual information first can reduce the spread of conspiracy theories. The researchers suggest that governments and social media companies develop and test interventions to counter misinformation, while reinforcing belief in accurate information. 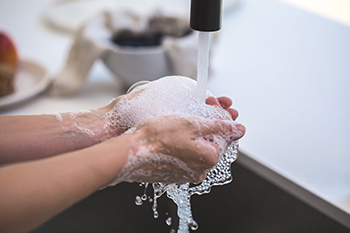 Research shows that enlisting trusted voices to share public health messages has been effective in changing behavior. In Sierra Leone during the Ebola crisis, for example, religious leaders from different faith backgrounds encouraged handwashing and safe burials, which was considered a turning point in the epidemic.

Effective ways to deliver a public health message include emphasizing the benefits to recipients, focusing on protecting others, and appealing to social consensus or scientific norms. To ensure behavioral changes, the authors explain that messages have to help people to feel confident in their new attitudes, so it is important to identify which message works best for which population.

As governments across the world strive to reach near-universal levels of testing, social distancing is currently the best way to slow the spread of the coronavirus pandemic. Behavioral and social scientists are uniquely positioned to explain public behavior in response to such an event, and to help policymakers determine the best way to promote cooperation and social distancing. The researchers note that so-called “tight” and “loose” cultures respond differently to collective threats, with tight cultures, like Japan or Singapore, behaving in a more orderly and collective manner than loose, or more permissive, ones, like Brazil or the United States. 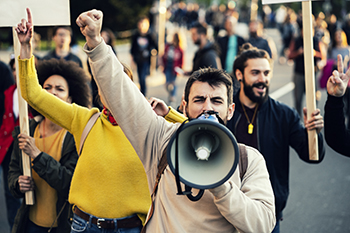 Policymakers should also consider affective political polarization, or the extent to which members of one political party feel negatively toward the other. Druckman has studied this phenomenon extensively, and he and this study’s co-authors describe how social distancing has the potential to drive Americans farther into their party’s respective so-called “echo chamber,” becoming less cooperative. They also note, however, that it could have a positive effect, as when citizens all face the same risk they tend to identify more with a national identity that transcends partisanship.

Group behavior is shaped by what is perceived as “moral”—which actions are admired and emulated, and which are shunned. Moral decision-making does not proscribe or encourage behaviors through the law, the researchers say, but it can still be shaped by policy. In light of the COVID-19 pandemic, researchers are focused on the dynamics of cooperation among large groups, which is difficult even in the best of times.

The authors describe how Americans tend to show low levels of trust in those who make utilitarian decisions like the life-or-death triage calls that many many hospitals with limited resources currently face. They say, therefore, it may be best to portray such decisions as coming through orders of government agencies to maintain trust in the medical profession.

The researchers also describe how to promote social distancing, and how policymakers and communicators should portray those who go about “business as usual” amid the pandemic as making an active choice, as active behaviors are judged more harshly by the public than passive behaviors. The researchers also recommend separating “good citizens” from “disease spreaders,” as well as focusing on the impact of negative behavior on one’s immediate community, which people tend to prioritize in a crisis.

People look for leadership in times of great uncertainty. What does social science research show is effective leadership during the current pandemic?

Because a pandemic requires that leaders persuade people to significantly change their behaviors, building trust in leaders’ voices is key. Reaching out in localities and using local voices led to increased compliance with public health measures in Liberia during the Ebola crisis, for example.

Leaders also need to emphasize the “shared social identity” of the groups they lead, which helps people feel less helpless and more hopeful. If people feel they are part of a larger entity, they are more likely to behave as citizens and less likely to see themselves as competitors. Research shows that leaders need to treat people with respect, rather than threaten them with sanctions, and good leaders foster the idea that the whole group is in the situation together. Leaders seen as “one of us” are more effective than those who seem to favor their own interests.

With the imposition of new standards of behavior under the pressures of the pandemic, leaders also need to exemplify moral conduct, selfless actions, and sacrifice. Leadership on an international level is also critical, research demonstrates. When leaders take building a shared identity too far—to stressing the superiority of their nation in handling the situation better than others—they promote national image over their citizens’ welfare and contribute to the growth of xenophobia and conspiracy theories.

Read a list from this paper of takeaways for policymakers managing COVID-19 here.