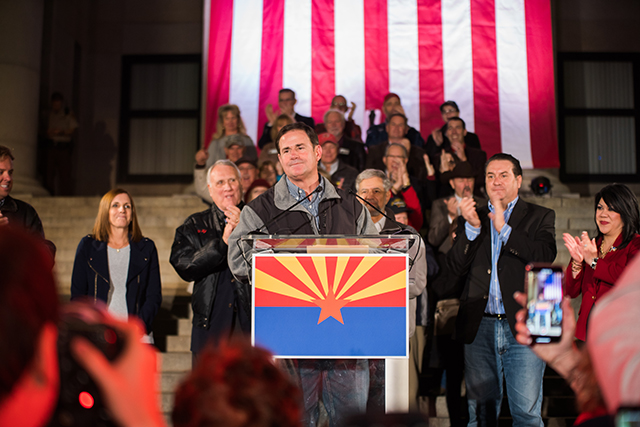 Arizona Governor Doug Ducey at a rally in 2018.

The latest results from an ongoing survey of Americans’ opinions about the COVID-19 pandemic show that confidence in executive leadership is declining, with governors seeing a 10-point drop on average in approval from April to June.

The survey, conducted by IPR political scientist James Druckman as part of a consortium of four universities that includes Northwestern, Harvard, Northeastern, and Rutgers, found not only governors’ approval ratings dropping, but those of President Donald Trump. His approval dropped an additional 8 points over the same period.

Druckman said “It is fascinating, the extent to which Americans are in fact responding to the pandemic itself not entirely through the lens of partisanship – if your state is doing better handling cases, approval is more stable.”

Erosion of support for President Trump’s handling of the COVID-19 pandemic was almost uniform across demographics including party, gender, race, age, and income, although for those with graduate degrees support only decreased by two points. Among those aged 65 and older with a high school education or less, support decreased dramatically, from 56% to 44%.

Druckman and his co-authors pay special attention to Arizona’s Republican Gov. Doug Ducey, who has the lowest approval rating in the country amid a renewed outbreak of the disease in his state. His rating dropped from a high of 57% in early May to 32% in late June. The researchers say his particularly low approval rating may be due to the fact that when they surveyed Arizonans in late May only 15% of respondents supported reopening “immediately,” despite the state government’s aggressive re-opening schedule.

The researchers note that despite the overall decrease in confidence, governors in many of the states that saw large spikes in case numbers early on in the Northeast, Midwest, and West Coast have retained consistently high approval ratings throughout the crisis. More highlights of the survey data include: