The researchers specifically recommend targeted diversity training that regularly includes physicians and professors, emphasizing their status as role models. Based on their findings, they argue such training might have indirect benefits for students and their future patients.

Informal elements of medical training contribute to racial attitudes, according to a new study.

Although many medical schools include diversity training in their curriculum, racial disparities in quality of care persist. Research shows these sometimes stem from physician attitudes, leading to differences in treatment and undermining trust in medical care. A new study by psychologist and IPR associate Sylvia Perry and her colleagues identifies one possible cause of biased attitudes and proposes possible solutions.

For the study funded by the National Heart, Lung, and Blood Institute, the researchers surveyed almost 3,000 white, Asian, and Hispanic students from 49 U.S. medical schools. The team asked about students’ contact with African-Americans before and during medical school, the amount of diversity-related training they received, and whether they had observed people in authority make negative racial remarks about patients.

But in Social Psychology Quarterly, they also identify experiences during medical training that lead to negative attitudes: Students whose instructors made negative racial comments or jokes were significantly more willing to express racial bias themselves.

The finding underscores the importance of informal, experiential elements of medical training in shaping the attitudes of future medical providers, the researchers explain.

“It’s important for medical schools to recognize that the formal processes, like diversity training, are not sufficient if the behavior that’s being modeled is counter to that,” Perry said.

The researchers specifically recommend targeted diversity training that regularly includes physicians and professors, emphasizing their status as role models. Based on their findings, they argue such training might have indirect benefits for students and their future patients.

Perry and her colleagues are continuing to follow the medical student cohort through residency training. They are currently investigating how the residents’ attitudes and training experiences influence how they think about actual interactions with patients. These findings will have further implications for how biases impact patient care.

Sylvia Perry is assistant professor of psychology and an IPR associate. 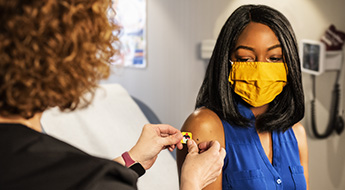