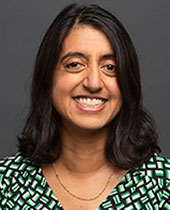 IPR economist Seema Jayachandran set out to study engineering and physics, but two years into her PhD program in theoretical physics at Harvard, she realized it wasn’t the right fit. In casting around for ideas, she discovered economics.

“It wasn’t as abstruse as theoretical physics, and I thought that might be the right compromise—pursue academia and do something quantitative, but a little more grounded in the real world,” Jayachandran said.

Today, instead of studying theories behind the mass of quarks or leptons, she now studies gender differences in the mass of humanity—as well as other developmental issues with practical policy applications in countries such as India and Uganda.

Why Does India Have More Boys than Girls?

One of these pressing problems involves the ratio between male and female children in India, which has worsened rapidly since the 1970s, a period when the country’s fertility rate fell rapidly. A decreased fertility rate is generally seen as a form of progress in developing countries, but does it also relate to couples choosing to have fewer daughters?

In the American Economic Journal: Applied Economics, Jayachandran quantifies the relationship between the sex ratio and how many children a couple wants. She discovers that as family size decreases—which is occurring with economic development in India—the desire for a son over a daughter increases.

“The most important thing [in India] is to have one son,” Jayachandran explained, noting that the eldest son is significant because his parents live with him when they are older, and he also holds the meaningful Hindu role of lighting his parents’ funeral pyres.

However, as long as they have that one son, couples in India are not against having daughters. If family size is larger, they actually indicate they want more daughters than sons, perhaps because daughters can care for siblings and perform household chores.

Jayachandran explained that progressives in India want parents to be able to have smaller families, and they also want women to have access to abortion so they can control their fertility.

“But once you have those two things, it makes it hard to keep the problem with the sex ratio from getting worse,” she said.

In related work, Jayachandran has zeroed in on the Indian state of Haryana, which has one of the most skewed sex ratios in the world, with about five males for every four females. Its government pays parents cash when they have daughters, but Jayachandran found fault with this method of addressing the sex ratio.

“I just don’t think it makes sense for the next 100 years to be paying people to have daughters,” Jayachandran said. “So why don’t we try something else, [like] try changing the root attitudes around gender?”

With Diva Dhar of the Gates Foundation and Tarun Jain of the Indian School of Business, she is assessing an attitude-change intervention in which a human rights nonprofit leads classroom discussions about gender equality.

The researchers are now conducting a survey to uncover if the program affected gender attitudes. If it did, they plan to follow up to see if altered attitudes lead to different outcomes. For example, do girls who went through the program marry later? Do the boys let their future wives work outside the home? And do participants have a better sex ratio among their own children?

Answering these questions will go beyond the short-term solution of paying parents to have daughters to understanding the long-term effects of attitudes about gender in India.

Another practical problem that Jayachandran is studying is how to combat deforestation in Uganda—which has some of the fastest tree loss rates in the world. Addressing it could be a cost-effective way to reduce global carbon dioxide emissions.

The program, which Jayachandran and her colleagues rolled out across 60 villages, paid landowners 70,000 Ugandan shillings ($28) per year over two years for every hectare of forest that they did not harvest or chop down. In villages not in the program, forest cover decreased 7–10 percent, but in villages that were, it only dropped 2–5 percent. She also did not find any evidence of landowners’ “gaming the system” by cutting down trees on nearby land while still collecting money from the program.

Jayachandran calculates that the benefit of delaying the emission of one ton of carbon dioxide was $1.11 under the program, while it cost just 57 cents. The results, published as an IPR working paper, are encouraging for other “payments for ecosystems services” programs to fight global deforestation, she said.

“A tree has as much carbon in the United States as it does in Uganda,” Jayachandran explained. “And the money people are getting by chopping down trees in Uganda is a lot less than in the U.S.” She suggests that it makes sense for the U.S. and other wealthier countries to consider paying for these programs in developing countries.

While Jayachandran said she did not come into development economics ready to “save the world,” she did come to appreciate what drives many people to choose the field.

“It’s very rewarding to work on something where you feel like your research can make other people’s lives a little bit better,” she said.

Seema Jayachandran is associate professor of economics and an IPR fellow.